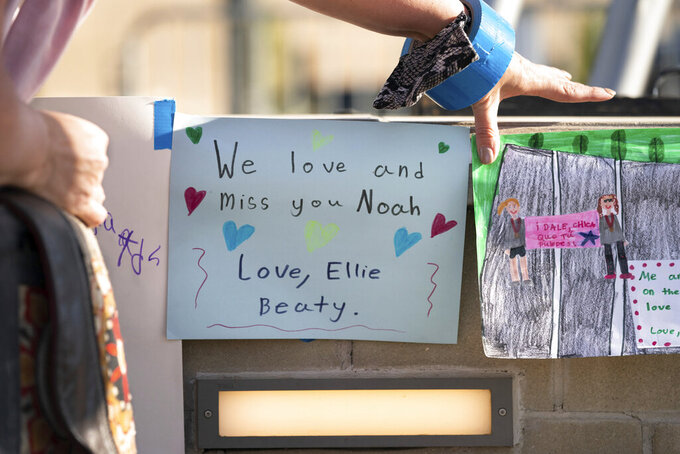 ROCK HILL, S.C. (AP) — Hundreds gathered Sunday at the vigil for the prominent South Carolina physician, his wife and two of their grandchildren — all dead at the hands of former NFL player Phillip Adams, authorities said — to reflect on the lasting impression they made on their communities.

People settled on camp chairs and picnic blankets for the service at a park in downtown Rock Hill, dressed in a gamut of bright shades, from vivid green and orange to robin blue. Mourners cried and laughed in equal parts at shared memories of Robert and Barbara Lesslie, and two of their grandchildren, 9-year-old Adah Lesslie and 5-year-old Noah Lesslie.

"The past few days have been certainly filled with much suffering and grief but also peppered with the most amazing treasures sent directly from God," said Amy Kulbok, one of Robert and Barbara Lesslie's children, before reading the lyrics to a song written by Adah herself. “Even in the deepest fog, we will find one another and love each other. When people see us, they will see Jesus Christ in you and me.”

According to police, Adams went to the home of Robert and Barbara Lesslie on Wednesday and shot and killed them, two of their grandchildren, Adah Lesslie and Noah Lesslie, and James Lewis, a 38-year-old air conditioning technician from Gaston who was doing work there. He also shot Lewis’ colleague, 38-year-old Robert Shook, of Cherryville, North Carolina, who died at a Charlotte hospital Saturday evening.

The former NFL journeyman then killed himself with a gunshot to the head early Thursday after officers surrounded his parents’ home, York County officials said.

In a statement to McClatchy Newspapers Friday, Adams’ parents and siblings sent their condolences to the Lesslie, Lewis and Shook families, saying, “The Phillip we know is not a man that is capable of the atrocities he committed on Wednesday.”

On Sunday, the aftermath of the shooting strung together many in Rock Hill, as bubbles drifted through the air and mourners still fresh in their grief linked arms in song in honor of the Lesslies' lives.

They remembered Robert Lesslie, 70, as a Renaissance man who not only practiced medicine and attended to many in the community but authored books and took up horticulture as a hobby.

Bob Elliott, once an associate pastor at First Associate Reformed Presbyterian Rock Hill, the Lesslies’ church, recalled the first time he saw Barbara Lesslie, known among many as “Ms. B.” During announcements at a worship service, she was rolled down the aisle in wheelbarrow, dressed in a tutu. “Is this allowed?” Elliot recalled wondering.

It was one among many anecdotes shared Sunday about Barbara Lesslie, 69, and her humor and exuberance for life. She joined a comedic skit group that was booked for birthday parties and civic events; she took at-risk teens to the emergency room, the morgue, the prison through an intervention program, those present at the vigil recalled.

“She was ageless. Her personality would be just as aligned with a 15-year-old as a 70-year-old,” said Elizabeth Hartley, a longtime counselor at Camp Joy, a Christian special needs camp in North Carolina where Robert served as the doctor for two decades and Barbara taught Bible lessons to campers.

Robert Lesslie awakened campers each day at 7 a.m. with the bagpipes, an instrument he picked up only in adulthood, said Elizabeth Smith, whose family worked at the camp. Barbara Lesslie’s preparations for Bible classes were so thorough — especially the elaborate visual aids she made that papered the walls — that no other teachers wanted to take her place, added Neal Stroup, the camp’s administrative director.

The grandchildren, Adah and Noah, ran around Camp Joy too, Adah helping to blow up balloons at a camp reunion a couple years ago.

Roger Revell, whose family attends church with the Lesslies, said both of the grandchildren, Adah and Noah, were not only smart, attending Spanish immersion classes, but also kind. He recalled that this year, both of them had graciously re-hid their Easter eggs five times so Revell's own young daughter could find them over and over again.

Noah had recently been gifted his own set of bagpipes, following in his grandfather's footsteps. Adah, just as precocious, had told people she was reading “Little Women” in just the second grade: “She made most parents feel rather discouraged,” Revell said.

The vigil closed with five minutes of silent prayer — not just for the Lesslies, but also for the Shook, Lewis and Adams families, pastors said — with a hymn playing in the background, as some attendees cried gently.

“You see in Scripture where Jesus himself grieves the loss of Lazarus. But for those of us who are in Christ, we grieve, but we grieve with hope," said Jamie Dagenhart, an elder at the church. "Because we know that one day, we will be reunited again with Robert and Barbara and Adah and Noah, in heaven.”