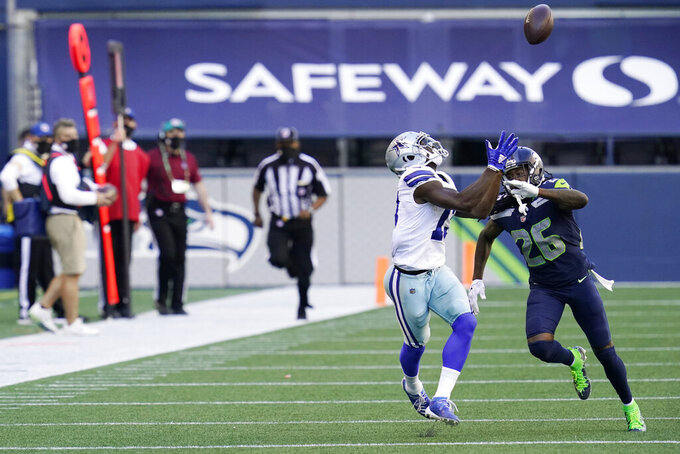 SEATTLE (AP) — DK Metcalf made an unforgivable blunder by starting his celebration too soon, a textbook example of what not to do.

His coach told him so. So did his quarterback.

“He had that fluke play today and I told him, never do it again,” Russell Wilson said.

Given the chance to redeem himself, Metcalf came through in the final minutes and this time there was no question about the celebration. Metcalf caught a 29-yard touchdown pass from Wilson with 1:47 remaining, and the Seattle Seahawks held off the Dallas Cowboys 38-31 on Sunday.

“The fact that he came back, of course he did. He's such a great competitor,” Seattle coach Pete Carroll said.

Metcalf appeared to have a walk-in touchdown after hauling in a deep pass from Wilson late in the first quarter. But he was careless with the ball in the final few steps before the goal line, and cornerback Trevon Diggs came up from behind and knocked the ball free. It went out of the end zone for a touchback.

Instead of a touchdown and 16-3 lead, it was a 62-yard reception and a forgettable moment.

“The lesson learned will help everybody and fortunately we overcame it and didn’t wreck the game for us,” Carroll said. “But it’s a terrible play. It really is because he’s got a touchdown, just finish it off, and he started celebrating too early.”

Metcalf was mostly quiet after his mistake as Tyler Lockett became the favorite target for Wilson. But when Seattle needed a big play late, Wilson floated a pass into the end zone for Metcalf.

Wilson was 27 of 40 for 315 yards. His latest bit of fourth-quarter magic ruined Dak Prescott’s attempt at a second straight major comeback.

“They made more key plays than we did,” Dallas coach Mike McCarthy said. “We had a lot of production, but the key plays in the game, I think you’ve got to give those guys credit.”

Dallas trailed 30-15 after Prescott fumbled on the first play of the second half and Wilson subsequently threw his fourth TD pass. But Prescott threw TD passes of 42 yards to Cedrick Wilson and 43 yards to Michael Gallup, and Greg Zuerlein’s 42-yard field goal with 4:03 left gave Dallas a 31-30 lead.

Prescott had one last chance after Metcalf’s TD reception. He led the Cowboys to the Seattle 22 but was sacked by rookie Alton Robinson on second down, and Dallas had use its final timeout with 16 seconds left. On third down, Prescott's desperation throw to the end zone was intercepted by Ryan Neal.

Prescott finished 37 of 57 for 472 yards, with three touchdowns and two interceptions. He set career highs for yards and attempts.

“I want to make those throws and I want to have that opportunity,” Prescott said. “We’ve just got to be better starting with myself of converting those and making more of these one-score games wins for us.”

While Prescott became the latest QB to have a big day against Seattle’s leaky secondary, the Seahawks held Ezekiel Elliott in check. Elliott finished with 34 yards rushing on 14 carries and scored on a 1-yard run in the first half.

Lockett set a career high with three TD receptions and finished with nine catches for 100 yards. Lockett scored once from 43 yards out and twice from the 1-yard line. Jacob Hollister also had a 1-yard TD catch and made the reception on Seattle’s 2-point conversion after Metcalf’s TD.

“It’s just staying alive and staying open,” Lockett said. “We have a quarterback that can figure out a way to run around and just keep the play alive and you never know when he’s going to be able to give it to you.”

Along with all the other marks set, Wilson became the fifth quarterback to throw five touchdown passes in consecutive games, joining Ben Roethlisberger (2014), Tom Brady (2007), Daunte Culpepper (2004) and Tom Flores (1963).

Dallas DE Aldon Smith had three sacks, two tackles for loss, four quarterback hits and a pass defensed in his most impactful game of the season. Dallas finished with four sacks of Wilson.

Adams suffered a groin strain early in the fourth quarter when he took an awkward step on a rush of Prescott. He immediately pulled himself from the game and was limping on the sideline.

Carson suffered a sprained knee on Seattle’s final drive. Dallas defensive tackle Trysten Hill twisted Carson awkwardly as he was pulled down on a 2-yard run.

Seattle lost both starting guards — Mike Iupati (sprained knee) and Damien Lewis (sprained ankle) — in the first half. Rookie linebacker Jordyn Brooks, making his first start, also left in the second half with a sprained knee.

Seahawks: Make another East Coast trip to play at Miami next Sunday.