49ers seek to bounce back from 1st loss when hosting Cards 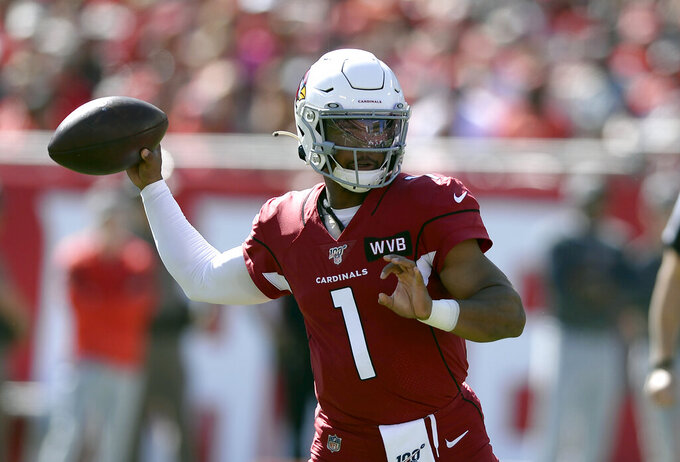 Arizona Cardinals quarterback Kyler Murray (1) throws a pass against the Tampa Bay Buccaneers during the first half of an NFL football game Sunday, Nov. 10, 2019, in Tampa, Fla. (AP Photo/Jason Behnken)

SANTA CLARA, Calif. (AP) — After nothing but success the first eight games of the season, the San Francisco 49ers now are learning to deal with failure.

The Niners' perfect season was derailed last week with an overtime loss to the Seattle Seahawks when San Francisco was unable to overcome a litany of offensive miscues.

The 49ers (8-1) will look to get back on the winning track Sunday when they host the Arizona Cardinals (3-6-1) for the second time in three weeks.

"I think we have a good mindset with it," said quarterback Jimmy Garoppolo, who had his worst day of the season in the 27-24 loss. "Everyone was in here yesterday working on the day off. Today it's just a sense of urgency in the building. It's good to see that."

San Francisco committed three turnovers, allowed five sacks and struggled to get much of anything going consistently on the ground or through the air against Seattle.

The 49ers had season lows in yards rushing (87) and yards per attempt passing (4.7) on a night that star tight end George Kittle was out with an injury and No. 1 receiver Emmanuel Sanders left with injured ribs in the first quarter.

San Francisco is using that performance as a teaching tool for the rest of the season.

"You learn from the good and you learn more from the bad,” tackle Mike McGlinchey said. “It's a huge step in the right direction for us to be able take as many blows as we did and play as poorly as we did and still have a chance, not only one chance but multiple chances to win that game. That's a testament to how our defense played. ... We need to do a better job on the offensive side of the ball to make sure we reward their work."

The Cardinals are stumbling toward their bye week, having lost three straight games after a promising start to the first season under coach Kliff Kingsbury and rookie quarterback Kyler Murray.

One of those losses was two weeks ago when Arizona fell 28-25 at home to the 49ers, a performance that gives the Cardinals confidence that if they can fix some mistakes they can compete with the first-place Niners.

The Niners’ offense was done in by the absence of Kittle and Sanders last week. San Francisco scored 10 points on the opening two drives when Sanders was healthy and then just six more on offense the rest of the game. With no consistent receiving threats, the Seahawks were able to load up against the run and allow only 3.2 yards per carry. Kendrick Bourne had two key drops for San Francisco, while Dante Pettis and Marquise Goodwin combined for no catches on six targets.

Arizona has relied on a variety of playmakers this season and the latest to make big plays is rookie receiver Andy Isabella. The second-round pick out of UMass had an 88-yard touchdown catch against the 49ers in the first meeting between the teams on Oct. 31. He has six catches for 174 yards over the past three games after not even being targeted in the season's first seven games. Kingsbury said Isabella has been improving steadily all season.

"It's been trending that way for a while," he said. "We've had him inside, had him outside, and I think now the comfort level, having him outside more so, has really helped his development recently."

The defensive star of the game for the 49ers last week was middle linebacker Fred Warner, who stepped up his performance in his first game since fellow starting linebacker Kwon Alexander suffered a season-ending torn pectoral muscle. Warner had 10 tackles, the first two sacks of his career, one forced fumble and a pass defensed.

"He gets us in and out of everything," coach Kyle Shanahan said. "He has to make a ton of calls. He's definitely our quarterback out there and I think he does it as good as anyone I've seen."

Arizona's defense ranks 31st out of 32 teams in points allowed (281), total yards allowed per game (412.5) and passing yards allowed per game (286.5). The Cardinals have given up at least 21 points in all 10 games this season but never have given up more than 38. Linebacker Chandler Jones has been one of the bright spots with 11½ sacks and five forced fumbles. Three-time All-Pro cornerback Patrick Peterson returned from a six-game suspension last month but hasn't had much of an impact. Kingsbury said the Cardinals had bouts of poor tackling in last week’s 30-27 loss to Tampa Bay.

"There were some shoulders being thrown," Kingsbury said. "We have to be better in those situations."

The 49ers again will be without starting left tackle Joe Staley, who will be out a couple of weeks after undergoing surgery on a broken finger. Staley broke a bone in his leg in Week 2 and missed the next six games. He then got hurt in his return to the lineup. With Staley unable to go, rookie Justin Skule is expected to move back into the lineup.

“I thought he did a very good job,” Shanahan said of Skule. “He came in there and stepped it up right away. Did a good job in his first game and I thought he got better each week.”