5 takeaways not enough for Steelers in Rudolph's 1st start 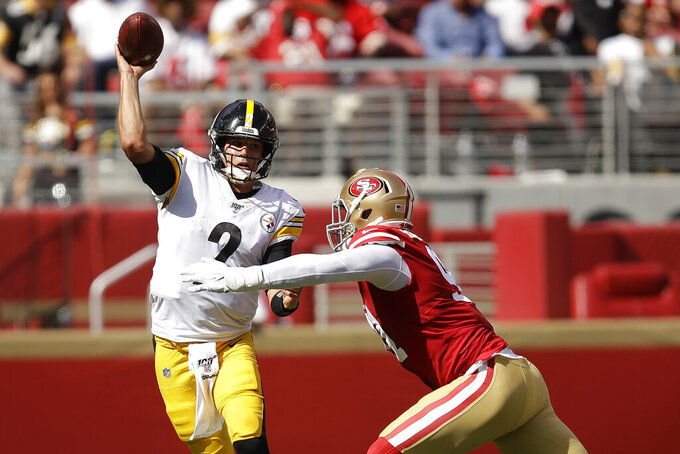 Rudolph and the rest of the Pittsburgh Steelers' offense couldn't do much of anything outside of those two long touchdowns and ended up losing a game the San Francisco 49ers kept trying to hand them.

James Conner lost a fumble with Pittsburgh protecting a lead late in the fourth quarter and the Steelers' opportunistic defense couldn't come up with a key late stop in a 24-20 loss on Sunday that sent the team to its second 0-3 start since 2000.

"A lot of mistakes," Rudolph said. "We can't be that slow-starting in the first half. I have to give our team and our defense more of a chance to put some points up early and get ahead with all of the turnovers they created. They played unbelievable. They did everything coach asked them through the week in creating turnovers and flying around. We have to back them up."

The Steelers' offense couldn't do enough. Pittsburgh settled for field goals after getting a pair of interceptions deep in San Francisco territory in the first quarter.

The offense then couldn't do much of anything outside of Rudolph's two deep strikes: a 76-yarder to JuJu Smith-Schuster in the third quarter that gave the Steelers a 13-10 lead, and a 39-yarder to rookie Diontae Johnson that made it 20-17 in the fourth.

Pittsburgh gained 126 yards the rest of the game, averaging just 2.6 yards per play to drop a third straight to open the season.

Rudolph finished 14 for 27 for 174 yards with an interception that set up San Francisco's first touchdown.

"For a young guy to come and start his first game in an away game on the West Coast and going against a great team, I think he handled himself well," Smith-Schuster said. "There were situations where we messed up, didn't execute or turned the ball over, he stayed positive and kept us going."

Despite all that went wrong on offense, the Steelers were still in position to win after the Niners committed their fifth turnover of the game — and third in the red zone — on a botched snap that gave Pittsburgh the ball with a three-point lead and 6:49 left to play.

But instead of burning the clock and backing up the 49ers, Conner lost a fumble on the third play of the drive, giving the 49ers the ball at the Pittsburgh 24.

The Steelers looked like they made the stop when they forced an incompletion on third-and-11 from the 14, but Mark Barron was called for a holding penalty.

"I just felt like the guy ran into me," he said. "I just absorbed him. I didn't get my hands off him fast enough and that was the call."

Two plays later, Jimmy Garoppolo found Dante Pettis for a 5-yard score with 1:15 to play and the Steelers were on their way to their first loss in 38 years when generating five takeaways.

But Pittsburgh turned those gifts into six points, while the Niners got 14 after two giveaways by the Steelers.

"We turned the ball over twice. They scored two touchdowns in the second half and really that's the difference in the game," coach Mike Tomlin said. "In the first half, we were getting turnovers and we were settling for field goals. So that's the story line of the game, if you will. Such is life in the National Football League. We take responsibility for it. We own it. Not good enough today. We won't blink."

The Steelers now must rebound and try to salvage the season with Roethlisberger out the rest of the way with an elbow injury.