After lengthy wait, Paul Tagliabue heads to Hall of Fame 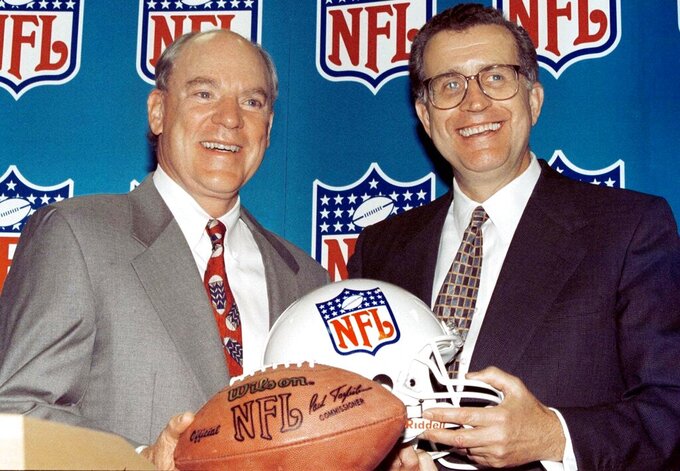 FILE - Houston businessman Bob McNair, left, and NFL commissioner Paul Tagliabue smile during a press conference in Atlanta, in this Wednesday, Oct. 6, 1999, file photo. Houston rejoined the NFL, paying a record $700 million for an expansion franchise. During Paul Tagliabue’s 17-year stint as commissioner, the NFL experienced labor peace, saw skyrocketing television deals, construction of new stadiums across the nation and expansion to the current 32-team makeup. Despite those credentials that continued pro football’s surge to the top of American sports, it took until a special centennial class in 2020 for Tagliabue to be voted into the Pro Football Hall of Fame after retiring in 2006. (AP Photo/W. A. Harewood, File) 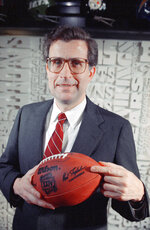 During Paul Tagliabue’s 17-year stint as commissioner, the NFL experienced labor peace, saw skyrocketing television deals, construction of new stadiums across the nation, and expansion to the current 32-team makeup.

Despite those credentials that continued pro football’s surge to the top of American sports, it took until a special centennial class in 2020 for Tagliabue to be voted into the Pro Football Hall of Fame after retiring in 2006.

The issue was concussions, which have plagued the NFL for decades, though team owners had a major role in the lack of progress in dealing with head trauma while Tagliabue was commissioner.

And in 2017, Tagliabue apologized for remarks he made decades ago about concussions in football, acknowledging he didn’t have the proper data at the time in 1994 when he called concussions “one of those pack-journalism issues” and contended the number of concussions “is relatively small; the problem is the journalist issue.”

“Bottom line, it sounded like I was shooting the messenger, which was the concussion issue,” he said on Talk of Fame Network. “My intention at the time was to make a point which could have been made fairly simply: that there was a need for better data. There was a need for more reliable information about concussions and uniformity in terms of how they were being defined in terms of severity.”

Fifteen years after Tagliabue was replaced by Roger Goodell, head trauma remains and probably always will be the major safety topic in the NFL. Just as there were few solutions and more research required in that area under Tagliabue, the same is true today.

Overall, though, Tagliabue’s impact on the sport was massive — comparable to virtually any league leader. And after a year’s delay due to the COVID-19 pandemic, Tagliabue will enter the Canton, Ohio shrine.

Tagliabue oversaw a myriad of new stadiums and negotiated television contracts that added billions of dollars to the league’s bank account. Under him, there were no labor stoppages and a very workable environment with the NFL Players Association — an atmosphere that no longer exists.

Among his major achievements was implementing a policy on substance abuse that was considered the strongest in all major sports. He also established the “Rooney Rule” in which all teams with coaching vacancies must interview minority candidates. It has since been expanded to include front-office and league executive positions, and although the rule is named for the late Dan Rooney, owner of the Pittsburgh Steelers, it could easily have carried Tagliabue’s ID.

“When Paul was named commissioner after that seven-month search in 1989, that’s when the league got back on track,” says Joe Browne, who spent 50 years as an NFL executive and was a confidant of Pete Rozelle and Tagliabue. “Paul had insisted during his negotiations for the position that final control over matters such as labor and all commercial business dealings had to rest in the commissioner’s office. The owners agreed and that was a large step forward toward the tremendous rebound we had as a league — an expanded league — in the ’90s and beyond.”

In one of his pivotal moments, Tagliabue called off NFL games the weekend after the terrorist attacks of Sept. 11, 2001. It was one of the few times the public compared him favorably to Rozelle, who proceeded with the games the Sunday after John Kennedy was assassinated in 1963. A key presidential aide had advised Rozelle that the NFL should play, a decision that was one of the commissioner’s great regrets.

One move Tagliabue never regretted was insisting the Saints remain a New Orleans franchise after owner Tom Benson sought to move the team to San Antonio following the devastation in the Big Easy from Hurricane Katrina.

Tagliabue was a lawyer who handled the NFL account, establishing a close relationship with Rozelle and other NFL officials during a series of legal actions in the 1970s and 1980s. When he took office in 1989 as the successor to Rozelle, the NFL had just gotten its first Black head coach of the modern era, Art Shell. By the time Tagliabue stepped down in 2006, there were seven minority head coaches in the league. Progress has been slower at general manager and team president levels, but many league vice presidents and major decision makers today are minorities.

Shell, also a Hall of Fame player, became the NFL’s first modern-day African American head coach with the Raiders. He got to see Tagliabue up close and thought he was utterly suited for his job.

“After my coaching career was over, I had the privilege of working directly with Paul in the league office,” Shell said, “His philosophy on almost every issue was, ‘If it’s broke, fix it. And if it’s not broke, fix it anyway.’

“He always challenged us to find better ways of doing things. Paul never lost sight of his responsibility to do what was right for the game. He was the perfect choice as NFL commissioner.”