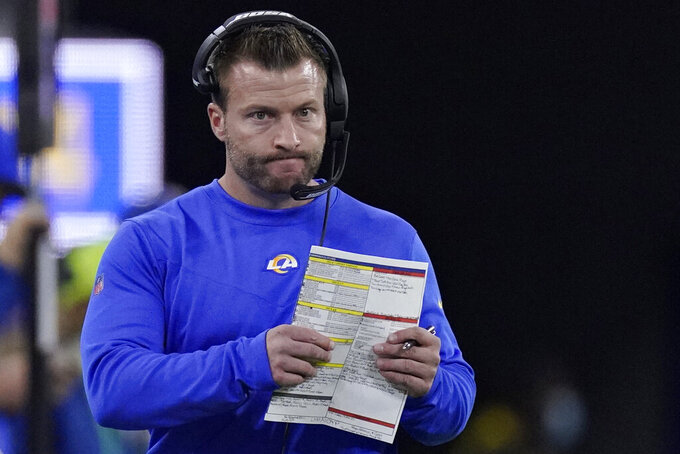 Andy Reid was a young, offensive-minded coach who hadn’t even been a coordinator when Philadelphia Eagles owner Jeffrey Lurie hired him to lead a franchise out of despair 23 years ago.

Now, Reid and three much younger, offensive gurus are the last coaches standing.

The NFL’s Final Four teams each feature a head coach with a strong offensive pedigree who took different paths to reach this point. Reid just happens to be two decades older than all of them.

The 63-year-old Reid leads the Kansas City Chiefs to their fourth straight AFC championship game against 38-year-old Zac Taylor and the Cincinnati Bengals in the first game Sunday.

In the second game, 42-year-old Kyle Shanahan and the San Francisco 49ers visit 36-year-old Sean McVay and the Los Angeles Rams for the NFC title.

It’s become a trend for NFL owners to give younger assistants their first head coaching job instead of hiring former head coaches. Six of the seven coaches hired last year were first-timers, including five under 45 years old.

Reid began his NFL coaching career as an assistant on Mike Holmgren’s staff in Green Bay in 1992. He held various roles for seven seasons as an assistant offensive line coach, tight ends coach, quarterbacks coach and assistant head coach before Lurie gave the little-known Reid an opportunity to make a big leap to head coach.

Reid seized it, impressing Lurie in his interview with a 6-inch binder containing notes on how to build a winning team. He won quickly in Philadelphia, leading the Eagles to a playoff victory in his second season and four straight NFC East titles and conference championship games over his next four years. Reid won more games than any coach in Eagles history over 14 seasons before going to Kansas City. He’s had a winning record in each of his nine seasons with the Chiefs, going 103-42.

His success has helped pave the way for other bright assistants to get opportunities to lead teams without previous head coaching experience.

Neither wants to wait as long as Reid did to hoist the Vince Lombardi Trophy.

“Just like anybody, when you have big moments in your life, whether it’s really good or really bad, those are things that you think about from time to time,” Shanahan said Thursday about his losses.

Shanahan’s dad, Mike Shanahan, led the Broncos to a pair of Super Bowl titles in the late 1990s.

McVay began his NFL career as an offensive assistant under Jon Gruden in Tampa Bay in 2008. He spent seven seasons in Washington, including three as an offensive coordinator, before the Rams made him the youngest head coach in league history at age 30 in 2017.

“I feel really grateful for these five years,” McVay said this week. “Has it accelerated my aging? Yes. It’s like dog years. But I love every second of it. But I definitely feel like I’ve aged a lot more than five years over the last handful of seasons.”

Taylor got his first gig in the NFL as an assistant quarterbacks coach with Miami in 2012. He was on McVay’s staff in Los Angeles for two seasons when the Bengals hired him in 2019 and went 6-25-1 in his first two seasons. But with Joe Burrow and Ja’Marr Chase on board, Taylor has turned Cincinnati into championship contenders.

“I think all that matters is our team has a lot of confidence right now and we believe that we belong,” Taylor said. “We believe that we’re as good as any team in the NFL.”

Reid, Shanahan and McVay could say the same.