Another late-season collapse keeps Raiders out of playoffs 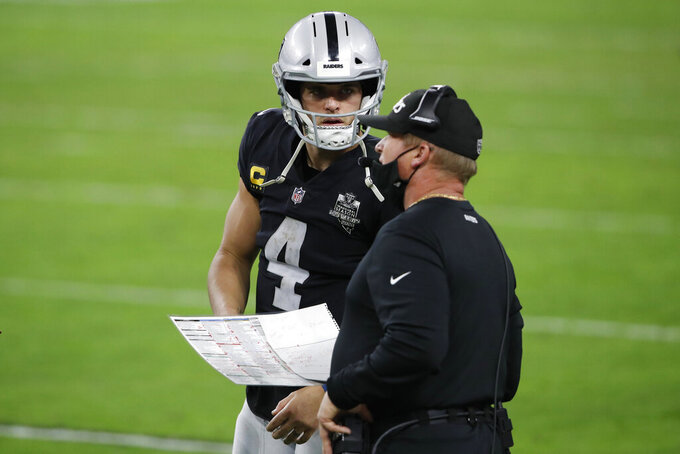 LAS VEGAS (AP) — Derek Carr will need to wait at least another year to make his first playoff appearance.

Another late-game collapse on Saturday night sent the Las Vegas Raiders to their fifth defeat in six games with a 26-25 loss to Miami and elimination from playoff contention.

“This one might be the hardest,” Carr said after the Raiders allowed the Dolphins to drive for the winning field goal in the final 19 seconds. Coach Jon Gruden had opted to run down the clock for a field goal rather than take the touchdown Miami wanted to give them.

Carr is finishing his seventh season and while he has put up prolific numbers it hasn’t translated to success. In his only winning season in 2016, he broke his ankle in Week 16 and could only watch as the Raiders were eliminated in their first playoff game.

Raiders fans have dealt with plenty of anguish the past two decades, their one winning season since the start of 2003 the fewest in the NFL. They have missed the playoffs in 17 of the past 18 seasons, with the past two years particularly painful.

The Raiders lost five out of six last year after going 6-4, and are doing even worse this season. They had a 6-3 record and a late lead against Kansas City before Patrick Mahomes led a late drive that sent Las Vegas into a downward spiral.

Darren Waller. The Pro Bowl tight end had another big game with five catches for 112 yards, giving him 98 catches for 1,079 yards on the season. Waller has back-to-back 1,000-yard seasons and broke Todd Christensen’s franchise record for tight ends of 95 catches in 1986. With seven catches next week, Waller can break Tim Brown’s franchise mark of 104 set in 1997.

Finishing drives. The Raiders once again failed to finish off drives with their six trips inside the Miami 35 leading to four field goals, one touchdown and a punt after Carr took a third-down sack. The Raiders have an NFL-high 23 field goal attempts in the red zone, and Daniel Carlson’s 18 field goals from 20 to 29 yards are the most in the NFL in at least 30 seasons. The Raiders have scored TDs on 40% of their goal-to-go drives the past three games after converting at an 80% clip the first 12 games.

Nelson Agholor. After a rough final season in Philadelphia, Agholor has been a revelation with the Raiders after signing a veteran’s minimum contract. His dazzling 85-yard catch and run was Las Vegas’ play of the game and part of a 155-yard performance. Agholor has 47 catches for a career-high 839 yards and eight TDs, matching his career best.

Damon Arnette. The rookie cornerback had a rough performance, with his blunder at the end of the game playing a big role in the loss. Arnette failed to drop deep in coverage on the final drive, setting the stage for the 34-yard pass to Mack Hollins that set up the winning field goal.

DE Clelin Ferrell (shoulder) is expected to miss the season finale. ... Gruden is hopeful that LBs Nick Kwiatkoski and Nicholas Morrow, DBs Erik Harris and Daryl Worley can return this week from the COVID-19 list.

0-120 — Since 2000, teams in the regular season and playoffs were 0-120 when starting a drive at their 25 or worse with less than 20 seconds remaining, trailing by one to three points, before the Dolphins rallied to win against Las Vegas.

The Raiders visit Denver on Sunday seeking to avoid a fourth straight losing season and win their first Week 17 game since 2010.