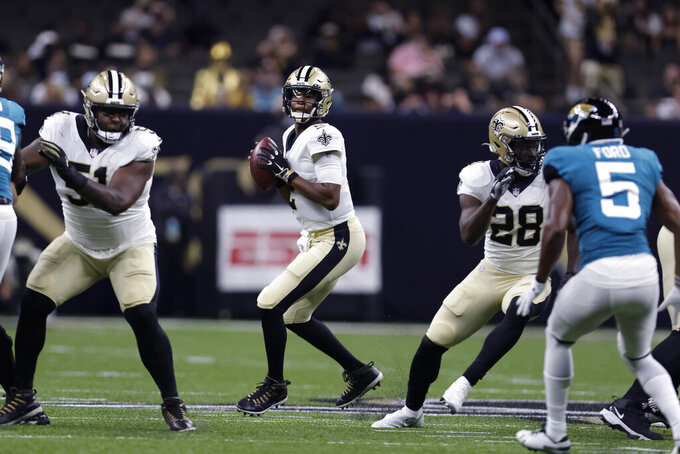 New Orleans Saints quarterback Jameis Winston (2) drops back to pass in the first half of an NFL preseason football game against the Jacksonville Jaguars in New Orleans, Monday, Aug. 23, 2021. (AP Photo/Brett Duke)

NEW ORLEANS (AP) — The Saints have selected Jameis Winston to succeed Drew Brees as starting quarterback for their regular season opener against Green Bay on Sept. 12, said a person familiar with the decision.

The person spoke to The Associated Press on condition of anonymity Friday because the club has not announced the result of its preseason competition for the starting QB job between Winston and Taysom Hill.

The decision, first reported by ESPN, means Winston is set to start his first regular season game since the end of the 2019 season with Tampa Bay.

The Buccaneers chose not to bring back Winston, who they drafted first overall in 2015, when they had an opportunity to sign former Patriots quarterback Tom Brady in the spring of 2020.

While the Bucs went on to win the Super Bowl with Brady, Winston spent last season on a one-year contract with New Orleans, hoping to resurrect his career by learning under coach Sean Payton, who designs New Orleans' perennially prolific offense, and Brees, the NFL's all-time leading passer, who announced his retirement in March.

This year, Winston returned to New Orleans on another one-year contract worth a base of $5 million plus incentives worth an additional $7 million and an opportunity to compete for an open starting job.

“What I look at is improvement, I’ve got to improve on everything, every single day," Winston said earlier this month. "Like, you can never get too good at execution, making it habitual, making my eyes faster, processing information faster. And that’s something I’m challenging myself every single day, in terms of study and visualization and working out.”

Now the 27-year-old Winston is on track to pursue the incentive pay in his contract and perhaps establish himself as more of a long-term fixture with the Saints if he can show signs of fulfilling more of the promise he was believed to possess when he won the Heisman Trophy and national title with Florida State in the 2013 season.

“This offense has seen someone who’s mastered his offense for the past 15 years. So, I am never going to arrive,” Winston said. “I’m going to continue to push myself and find ways to get better. Whether it’s footwork, whether it’s progression, whether it’s accuracy. I’m just challenging myself.”

Winston separated himself from Hill considerably in the Saints second preseason game Monday, completing nine of 10 passes during three series, highlighted by touchdown passes of 43 and 29 yards to second-year receiver Marquez Callaway.

The Saints close out the preseason on Saturday at home against Arizona, and it is unclear how much starters will play.

Hill has far less experience as an NFL starter than Winston, but went 3-1 as a starter while Brees was out with injured ribs last season. He also has been with the organization since 2017, and was effective substituting in for Brees periodically as a change-of-pace, read-option threat.

Additionally, the versatile and speedy Hill has played tight end and on special teams. The Saints made no secret of how they valued Hill's ability to keep opposing defenses off balance in his multiple roles, and he could potentially resume some of those roles.

Winston was a mercurial performer through his first five NFL seasons with Tampa Bay.

In his career, Winston has completed 61.4% of his passes for 19,812 yards and 121 TDs vs. 88 interceptions. But while Winston's accuracy and decision-making were questionable at times, his ability to drive throws downfield for big plays was never in doubt.

Even last season, the Saints inserted Winston for a trick play during a divisional-round playoff game against Tampa Bay. Winston received a lateral and threw deep to Tre'Quan Smith for a 56-yard touchdown.

“You don't do what he did in this league by accident,” Alvin Kamara said last week. “It's too high a level of competition be able to come in an be like, I just threw for 5,000 (yards in a season). ... You can't do that. So, I have the ultimate respect for Jameis. Period.”