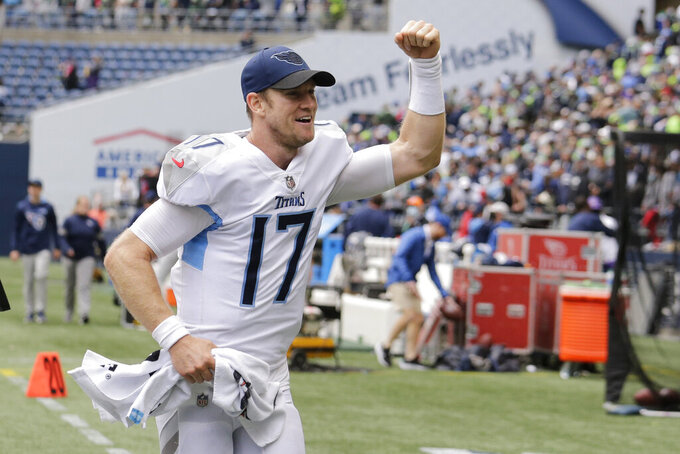 NASHVILLE, Tenn. (AP) — The Tennessee Titans led the NFL in 2020 with a plus-11 turnover margin thanks in part to how well they took care of the ball.

Two games into this season, that's proving more of a challenge.

Ryan Tannehill already has lost three fumbles while being sacked, putting him halfway to the six fumbles he lost all of last season. Now three of his starting offensive linemen are hurting as well with Indianapolis (0-2) visiting Sunday.

Tannehill said Wednesday the Titans (1-1) try to limit the hits he takes. Being an NFL quarterback knowing what to do with the ball and when is key.

“You just don’t want to blindly stand there and and just continue to wait,” Tannehill said. “But there’s a lot of situations where you can see a receiver or the concept opening up. And, you know, you just need to stand in there for for a half-second.”

Tannehill lost two fumbles when sacked in Tennessee's season-opening loss to Arizona. He lost the third last week when sacked by Seattle, which was turned into a touchdown two plays later.

Yet Tannehill shook off the fumble and guided the Titans to a 33-30 overtime win over Seattle. It was the 23rd winning drive of his career and 10th since coming to Tennessee in 2019, the most among all NFL quarterbacks in that span.

Tannehill credits all the work in training camp and in practice each game week. He sees his role as pretty simple.

"It’s important for me to remain steady and kind of transition or exude that confidence over to the guys that we’re going to go out and make this happen,” Tannehill said.

He also threw for 347 yards behind a patchwork offensive line after three-time Pro Bowl left tackle Taylor Lewan was scratched before kickoff. Lewan aggravated his right knee, the same knee he tore an ACL in last October. Left guard Rodger Saffold also hurt a shoulder and played only 34 snaps.

Lewan practiced Wednesday. But neither Saffold nor center Ben Jones (knee) practiced. Ty Sambrailo, who replaced Lewan, practiced but was on the injury report with a foot issue. That leaves plenty of uncertainty about the left side of the offensive line.

One thing helping Tannehill is a growing chemistry with seven-time Pro Bowl wide receiver Julio Jones. He connected with Jones on a 51-yard reception last week, and Jones finished with 128 yards receiving on six catches. Jones nearly had a seventh for a touchdown, which was overturned on review.

“Obviously you see him go up and make a play early on like he did in the first drive of that game, going up on a third down in tight coverage, I put a ball where really trusted him to go to go get it and got it for a huge first down," Tannehill said. "So you see him make that play and it builds confidence quickly.”