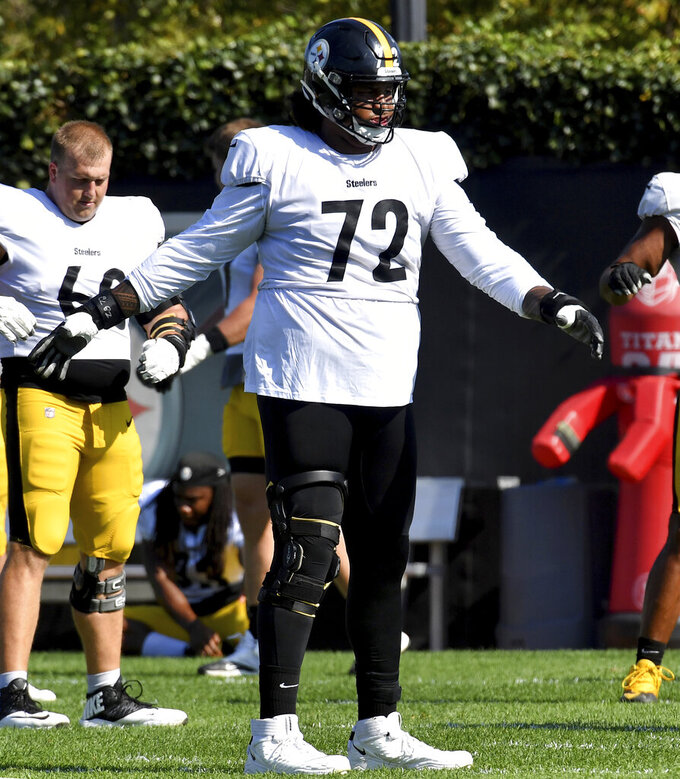 PITTSBURGH (AP) — Zach Banner's mind is eager to get back to work and help the Pittsburgh Steelers' completely retooled offensive line find some semblance of identity.

The massive right tackle also knows what his mind wants doesn't matter. He needs to show the coaching staff his surgically repaired right knee is fully healthy — or as close as it can get — before his towering 6-foot-8, 358-pound frame trots onto the field and into the huddle.

“I have to be reliable,” Banner said Thursday after a second straight day of practice as he nears a return from injured reserve. “I think that’s the biggest thing that you have to realize, right? Every single one of those 53 roster spots means something. I mean, somebody is going to do something to contribute to the team. I will not take up one of those spots until I can actually contribute to this team.”

Banner vowed during training camp he'd be ready to go by the season opener against Buffalo, insisting he was nearly fully recovered from the torn ACL he suffered late in a Week 1 victory over the New York Giants last year.

Then he had what he vaguely called a “setback” during an exhibition game against the Detroit Lions, sending him to injured reserve and causing a trickle-down effect that forced Chuks Okorafor to move from left tackle to right tackle and thrust rookie fourth-round pick Dan Moore Jr. into a starting role.

The results have been less than ideal. The Steelers are riding a three-game losing streak into Sunday's visit from Denver (3-1) and are last in the NFL in yards rushing and have allowed 10 sacks, or just four fewer than they gave up all of last season.

Watching “naked” (Banner's code for out of uniform) on the sideline hasn't been fun. While the relentlessly chatty, eternally optimistic Banner has made it a point to try and serve as a de facto position coach on the sideline during games, he knows that's not what he's getting paid for.

Something that Okorafor, Moore, center Kendrick Green, right guard Trai Turner and left guard Kevin Dotson (among others) have failed to do with any sort of consistency. The messy results have led to a miserable opening month for the defending AFC North champions. The offense is having trouble sustaining drives. The defense is on the field too long and the Steelers find themselves in the unlikely spot of last place in the AFC North.

It's unclear whether Banner — who became a fan favorite a couple of years ago while coming in as a sixth lineman and reporting as an eligible receiver — will be available to face Denver and star outside linebacker Von Miller. He returned to practice on Sept. 29 and the Steelers have 21 days to decide whether to activate him or put him on the injured list for the rest of the season.

“I want to play,” he said. “It’s the coaches pulling the leash. I’m not making that up. I’m not leaning on them. I’m just telling you the truth. I want to play. I’m ready to play.”

Pittsburgh’s line could certainly use the help, but the Steelers are also playing the long game. Rushing Banner back too soon could be costly, and he knows it. He's still trying to get comfortable with the idea of playing with a sizable steel brace stabilizing his right knee.

“You have to get your brain trained,” he said. “Yeah, you really you do. And that’s where the reps come in. And as everybody knows, there (weren't) that many reps during camp. Just you have to get those reps in to make yourself comfortable, especially as an offensive lineman.”

The key is the ability to “finish” blocks, meaning you keep on pushing even as bodies fall around you. It's something he sees Green and Moore doing with regularity, which he offers as proof that the group as a whole is on the right track.

At least, individually. Winning a block is one thing. Winning a game is another. The Steelers haven't done that for nearly a month. And until they do, all the progress they talk about is ultimately just that, talk.

“Yes, like we haven’t been together for a long time,” he said. “Yes, we do display physicality from individual standpoints. But we have to win. Like regardless of anything we’re talking about right now, we have to win whatever that looks like.”