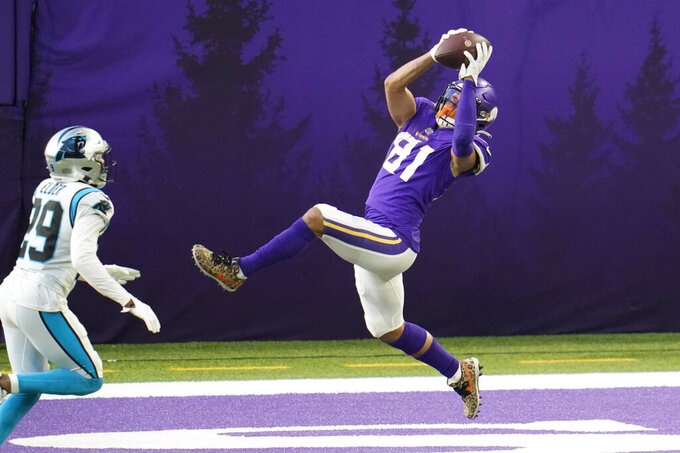 MINNEAPOLIS (AP) — Chad Beebe seized the chance to make up for the glaring mistake still fresh in his mind, one of many gaffes that nearly cost Minnesota the game.

After their awful start, the Vikings turned November into quite a redemption tour.

Beebe caught a 10-yard touchdown pass with 46 seconds left shortly after he muffed a punt that let Carolina pad its lead. Then Joey Slye's 54-yard field goal try went wide left with 1 second remaining, preserving the Vikings' 28-27 victory over the Panthers on Sunday.

“It’s just having that never-give-up attitude. Our entire team kind of felt that way. We had plenty of time to drive down and score, and that’s exactly what we did,” said Beebe, who had three catches on the seven-play, 75-yard drive that Kirk Cousins directed in 65 seconds for the lead.

The Vikings (5-6) finished the month with their fourth win in five weeks out of their bye, moving within one game of the final NFC wild card spot.

“We made it thrilling there at the end,” coach Mike Zimmer said, “but we got it done.”

Teddy Bridgewater hit Robby Anderson for a 41-yard touchdown late in the second quarter and went 19 for 36 for 267 yards. Bridgewater’s first game as a starter against his original team included an interception by Vikings linebacker Eric Kendricks at the 7-yard line earlier in the first half, and he also misfired on a late throw in the end zone that would've sealed the game.

“We put some pressure on him, which was good. Whether or not that resulted in a sack, just to get him moving around,” linebacker Eric Wilson said.

Cousins went 34 for 45 for 307 yards and three scores while missing two of his top five targets, with NFL touchdown receptions leader Adam Thielen on the COVID-19 list and tight end Irv Smith Jr. sidelined by a groin injury.

The third quarter was rough. Cousins and Dalvin Cook each had fumbles recovered and returned for touchdowns by Panthers rookie Jeremy Chinn — on consecutive plays from scrimmage after Dan Bailey’s 53-yard field goal had given the Vikings the lead at the break.

The Vikings finally got a drive going after D.J. Wonnum blocked Slye's 28-yard field goal attempt, but illegal snap and illegal forward pass penalties led to settling for a short kick by Bailey. Slye matched that on the ensuing drive for the Panthers (4-8).

Trailing 24-13 at that point, Cousins looked flustered. He tripped over left guard Dakota Dozier's foot during a first-down dropback, resulting in a 6-yard sack. But Cousins was in control all along, as it turned out, leading an 11-play, 75-yard drive that culminated in Justin Jefferson's second touchdown grab of the game with 5:38 to go. Bisi Johnson's acrobatic catch for the 2-point conversion cut the deficit to one score.

After the Vikings forced a punt, Beebe dropped his fair catch. Myles Hartsfield recovered at the 9 shortly before the 2-minute warning. The Panthers played it safe with a pair of running plays, and Bridgewater threw errantly for an open D.J. Moore over the middle on third-and-goal from the 3. Coach Matt Rhule called for the short kick that pushed the lead to six points.

Cousins then responded with the kind of late-game go-ahead drive that’s been missing more than the Vikings would want during his three seasons.

“I’ve always felt we have a really good locker room with quality character guys who are just going to keep playing and not get down or give up or point fingers," Cousins said, "and a day like today, you get to see that character shine through.”

Bridgewater nearly matched Cousins' heroics against the team that drafted him in the first round in 2014. He connected with Curtis Samuel for 35 yards to near midfield with 28 seconds remaining, but a Vikings team with two one-point losses this year held on this time.

“Instead of pointing fingers, I’d rather just point the thumb back at me and just say, ‘Hey, that’s not good enough, and it falls back on me,'” Rhule said. “That’s not just coach-speak. I’m disappointed in myself and my staff tonight.”

There were 38 combined points scored in a dizzying second half that started with Chinn's remarkable sequence. Chinn, a second-round draft pick out of Southern Illinois who has thrived at a hybrid safety/linebacker position, became the third player in NFL history with multiple fumble returns for touchdowns in the same game. He also had 13 tackles.

The first fumble came loose on Zach Kerr's sack of Cousins, leading to a 17-yard return for the score. The second one emerged from a crowd around Cook, who not only fumbled but hurt his right ankle during the play. Chinn escaped for a 28-yard touchdown that time.

“I haven’t scored a touchdown since high school, so it was cool getting back in the end zone,” Chinn said.

Panthers: Moore hurt his right ankle and needed help off the field after landing awkwardly in the end zone on the incompletion by Bridgewater.

Vikings: Cook returned later in the game from the ankle injury and finished with 18 carries for 61 yards and four catches for 21 yards.

Panthers: host Denver on Dec. 13, after their bye next week.