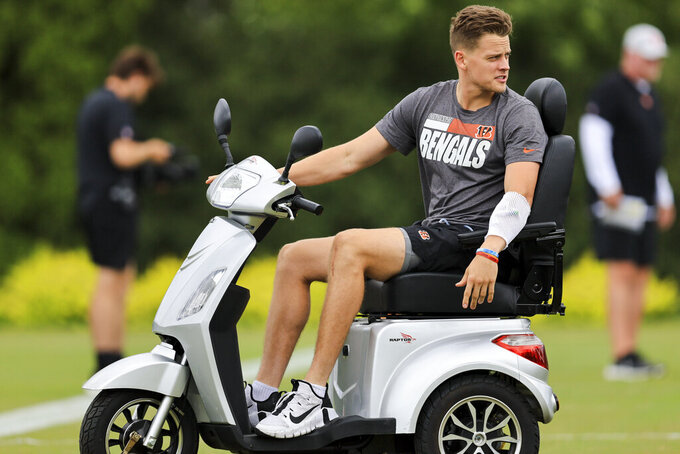 CINCINNATI (AP) — Cincinnati Bengals quarterback Joe Burrow is still on the mend from an appendectomy two weeks ago, and there is no timetable for his participation in training camp.

The third-year quarterback, who last season led Cincinnati to its first Super Bowl in 33 years, has been observing practice from a golf cart or scooter. He drew a hearty cheer from fans at a recent practice when he picked up a football and tossed it around.

“Every day has been a very encouraging day for him,” coach Zac Taylor said Wednesday. “I'm not going to make a prediction.”

The quarterback's father, Jimmy Burrow, told radio analyst Dave Lapham on the “In the Trenches” podcast Friday that it might be a “few weeks” before his son is able to practice.

“It set him back,” Jimmy Burrow said of the surgery. “But he seems to be getting better every day, and hopefully, here in a few weeks we’ll be back out on the field.”

Taylor said he doesn't expect Burrow to be lagging in his preparation for the season. Like most of the Bengals' starters, Burrow wouldn't have played in the preseason opener on Friday night anyway.

“You know, obviously the physical reps, we're going to try to get those reps from him” when he returns, Taylor said. “We've really gone through all the situation stuff we wanted to get through. When he does get back in the mix, practices will be focused on getting our quarterback ready.”

Backup quarterback Brandon Allen is expected to play the first half of Friday's game against the Cardinals, and Jake Browning the second half. The Bengals host AFC North rival Pittsburgh in the season opener Sept. 11.

Taylor is not too worried about the preseason. Burrow was mostly held out of preseason games last summer as he recovered from knee surgery.

“You can give (Burrow) a lot of credit. He's a smart guy, he's repped the stuff before,” Taylor said. “But again, we want to make sure that leading up to Pittsburgh that we haven't been skipping steps in terms of areas of the field we want to be able to work on. So there will be a lot of consideration, when he does get back into the mix, how we structure the practice periods to make sure he's getting a lot of the work he needs.”

The Bengals did get some good news on Wednesday when right tackle La'el Collins was cleared to practice. He'd been on the non-football injury list with a back problem.

Collins, who signed a three-year, $21 million contract in May, is seen as an integral part of what the Bengals hope is an improved offensive line. The team also dipped into free agency to sign right guard Alex Cappa and center Ted Karras after Burrow was sacked more than any other quarterback in 2021.

“I think that’s a great, great step in the right direction for us,” Taylor said Collins' return. “He’ll be limited, you know. We’re not going to throw him out there in the team mixes, but just to get him back in the walk-throughs, get him back (with O-line coach Frank Pollack). That’s the starting process for this week, and then we’ll continue to grow from there. But good to get him back in the mix.”

The 29-year-old Collins played his first seven seasons with the Dallas Cowboys.

“I feel good,” he said. “Every training camp is important. It’s time when you get to go in and put in work and perfect your craft. You got to lock in every day and come with that same focus each and every day.”

In other injury news, Taylor said receiver Tee Higgins could return to practice next week. Higgins had labrum surgery in March — he had suffered the injury in Week 2 last season — that sidelined him from offseason workouts.