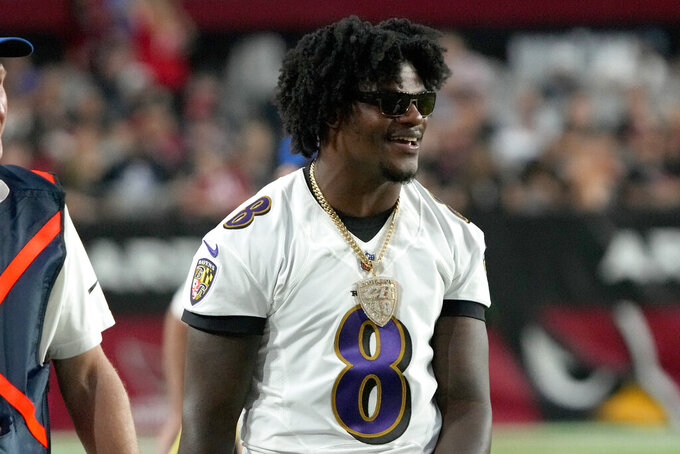 CLEVELAND (AP) — Myles Garrett's face cringed as if he had just missed a certain sack by letting a quarterback escape.

On the brink of a new season, Garrett hates to think about how Joe Burrow and the Cincinnati Bengals, coming off three straight fourth-place finishes and expected to do little in 2021, turned the AFC North upside down.

Garrett won't be surprised if it gets flipped again.

“Everyone’s pretty good this year,” said the Browns' All-Pro defensive end, who entering his sixth year has never seen the division so balanced. “You couldn’t say that every year that I’ve been here. But everyone has a chance to win it.”

One of the NFL's roughest divisions figures to be another four-team fracas.

Cincinnati believes it can repeat, and with Burrow that's a solid bet.

Baltimore, healed up after an injury-ravaged 2021, is poised to bounce back behind a healthy Lamar Jackson.

Pittsburgh's is replacing future Hall of Fame QB Ben Roethlisberger with Mitch Trubisky or rookie Kenny Pickett, and will rely on its defense.

And then there's Cleveland, whose Super Bowl hopes are on hold with Deshaun Watson's 11-game suspension.

Last season, 10-7 was enough for the Bengals to win the division. It seemed to stun everyone but Burrow, who moved into elite status in Year 2.

As he handicapped the North, Garrett pointed to the North's brightest.

“There’s a lot of stars on each team and at each position," he said. "Now it’s just about those guys stepping up and making those plays when they need to, and carrying those guys alongside them.”

Out to prove last season was no fluke, the Bengals will rely on one of the league's most explosive offenses and a clutch kicker.

Cincinnati added guard Alex Cappa, center Ted Karras and tackle La’el Collins in free agency to keep Burrow upright after he was sacked an NFL-high 51 times in the regular season, 19 in the postseason.

Expectations are sky-high for wide receiver Ja’Marr Chase, the Offensive Rookie of the Year following a 1,455-yard, 13-touchdown debut. Tee Higgins and Tyler Boyd round out a terrific trio of targets.

Kicker Evan McPherson was money as a rookie in the playoffs, making made all 14 field-goal attempts, two of them game-winners.

The goal is simple: another AFC title.

“That’s what we strive to work for this year, to get back,” fourth-year coach Zac Taylor said.

One of the game’s most unique talents, Jackson will be under a microscope. His contract situation is already.

He's entering the option year of his rookie deal, and he and the Ravens have yet to reach a compromise.

“It’s obviously a very strange situation for everybody else, including me, but whenever I talk to him, he’s always like, ‘I’ll get it done when it gets done,’” cornerback Marlon Humphrey said.

The Ravens lost their final six games last season, in part because Jackson missed the last four with ankle problems. He won't have receiver Marquise Brown, traded to Arizona.

In addition to Jackson’s health, a big key is how the secondary rebounds from finishing last in the NFL against the pass.

Watson's on the shelf until at least December after agreeing to the 11-game ban and $5 million fine for violating league's personal conduct policy after two dozen women alleged he was sexually inappropriate during massage therapy sessions.

It's not what the Browns had in mind when they traded three first-round picks to acquire the three-time Pro Bowler from Houston.

For now, Jacoby Brissett, a break-glass-in-case-of-emergency QB throughout his career, will have to keep Cleveland's season afloat.

Fortunately, the Browns can turn to running back Nick Chubb, behind one of the league's best lines, to carry even more of the offensive load. He rushed for 1,259 yards last season despite missing three games.

Amari Cooper came over in a trade from Dallas to be new No. 1 receiver, but the Browns lack quality depth at that position and need Donovan Peoples-Jones, Anthony Schwartz or rookie David Bell to pick up the slack.

Garrett leads a defense that improved dramatically as the 2021 season wore on. With Pro Bowler Denzel Ward and Greg Newsome II, Cleveland has two of the game's best coverage cornerbacks.

Rookie Cade York is a major upgrade on an inconsistent kicking game.

The starting quarterback won't be the only thing new in Pittsburgh.

From the coaching staff (hello, defensive assistant Brian Flores) to a chunk of the offensive line to inside linebacker to even the place the Steelers call home (it's Acrisure Stadium, not Heinz Field), Pittsburgh enters 2022 somewhat of a mystery.

If anything, Roethlisberger’s departure shifts the team’s identity to the other side of the ball, perhaps for the first time since the halcyon days of Troy Polamalu and James Harrison.

In outside linebacker T.J. Watt (the reigning Defensive Player of the Year), defensive lineman Cam Heyward and safety Minkah Fitzpatrick, the Steelers have difference-makers at all three levels. Yet for all of that star power, Pittsburgh still finished last in the NFL against the run.

Enter Flores, hired as a senior defensive assistant, and Teryl Austin, promoted to defensive coordinator after Keith Butler’s retirement. Their job will be to return a bit of menace to a unit that was a pushover at times against quality opponents.

If the Steelers are to get back to the playoffs a third straight season, they’ll likely have to do it relying on running back Najee Harris and a defense designed to win low-scoring games.

“We understand our goals,” said Heyward, entering his 12th season. “We understand where we fell short last year, but our aspirations to be the No. 1 defense every time we step out.”