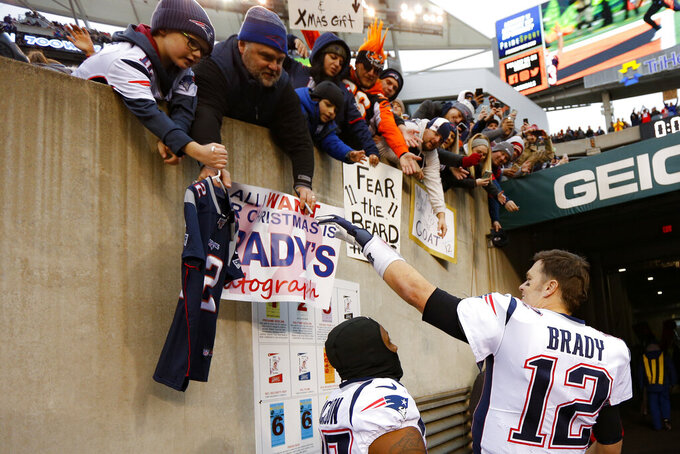 CINCINNATI (AP) — Tom Brady threw a pair of touchdown passes, closed in on a notable career record, and was rewarded with tens of thousands of Patriots fans cheering his name as the minutes ran down.

“That was pretty sweet,” Brady said.

Yes, New England was back in the playoffs after a season that has been very uneven by its lofty standards.

And yes, the Patriots' 42-year-old quarterback was able to give them just enough and let the league's top-ranked defense do the rest, just as it has done all season.

Brady threw a pair of touchdown passes to move within one of the NFL career record, Stephon Gilmore returned one of New England's four interceptions 64 yards for a score, and the Patriots clinched a playoff berth Sunday with a 34-13 victory over the Cincinnati Bengals.

“That's what you play for — you play to keep playing,” said Bill Belichick, the first NFL coach to reach the playoffs in 11 straight seasons.

Brady had touchdown passes of 23 and 7 yards that left him with 538 for his career, one shy of Peyton Manning's record. He finished 15 of 29 for 128 yards and missed open receivers numerous times, a performance below his career standards.

“Yeah, but we won,” Brady said. “I'm happy we won. I wish we'd always do better. There's always things to improve on."

The Patriots (11-3) broke a two-game losing streak by getting five turnovers, including the four interceptions in the second half.

Gilmore picked off Andy Dalton twice in the third quarter, with his second pick-6 of the season putting New England in control. J.C. Jackson also picked off two as the Patriots pushed their league-leading interception total to 25.

It's the fourth time this season that the Patriots picked off four passes in a game.

“I've got some great players around me," Gilmore said. "We're just having fun.”

Anyone who cared to focus on the Bengals sideline Sunday saw nothing but glum faces.

The Bengals (1-13) got a touchdown pass from Dalton that ended a streak of 20 straight games without reaching the end zone on their opening drive. All they managed the rest of the way was a pair of field goals.

The Patriots played more man-to-man coverage in the second half and got the better of it.

“I was trying to give my guys a chance, and their guys ended up making the plays,” said Dalton, who went 17 of 31 for 151 yards and tied his career high for interceptions.

It was the second time Bengals coach Zac Taylor was on the opposite side against Belichick. Taylor was the Rams' quarterbacks coach last season when the Patriots thwarted them to win the Super Bowl.

This time, with Taylor calling the plays, the Bengals held up for a half before it all fell apart, leaving them as the league's only one-win team.

“On the 1-on-1 plays, we got bullied," Taylor said. "Their guys competed. They play tough man coverage. Gilmore is one of the best in the league.”

Alex Erickson muffed a punt that set up a field goal, Dalton's interception led to Brady's second touchdown pass, and Gilmore's return made it 27-10.

Belichick is in the playoffs for the 18th time, tying Tom Landry for second all-time, one behind Don Shula. His 11th straight postseason berth broke a tie with Tony Dungy for the league record.

The Patriots also picked off four passes this season against Miami, Buffalo and the New York Jets.

The Patriots finished the regular season 6-2 on the road after going 3-5 last year.

The Patriots have seven touchdowns by their defense or special teams — two fumble returns, three interception returns and two blocked punt returns. The club record is nine non-offense TDs in 2010 and 1961.

It was the sixth time in Patriots history that two players had a pair of interceptions. The last time was 1986, when Ronnie Lippett and Steve Nelson each picked off two. ... Gilmore has returned two INTs for touchdowns this season. The last Patriot with two was Tedy Bruschi in 2003. ... Rex Burkhead ran 33 yards for a touchdown against his former team, the longest run of his career.

Bengals: play at Miami, then host the Browns.