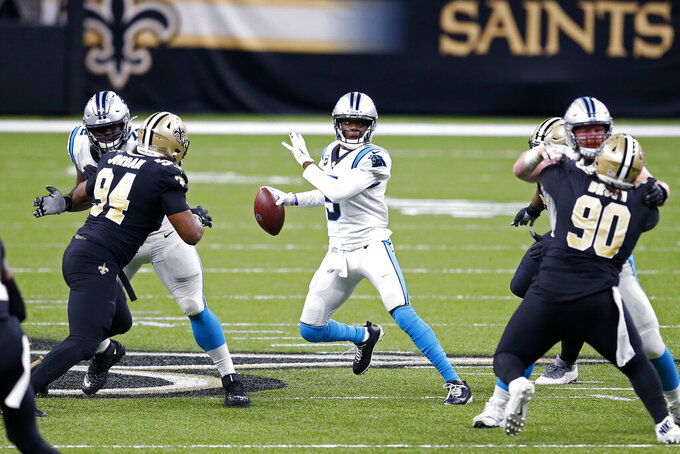 NEW ORLEANS (AP) — Teddy Bridgewater took a sack when he could least afford to late in the fourth quarter against the Saints.

It was about the only mistake he made in his return to New Orleans a year after going 5-0 as the Saints' starter in place of then-injured Drew Brees. It also was the moment he and coach Matt Rhule dwelled on after the Panthers’ 27-24 loss on Sunday.

Bridgewater completed 23 of 28 passes for 254 yards and two touchdowns, but his 8-yard loss on the Panthers’ final offensive play forced Joey Slye to attempt a 65-yard field goal right after the 2-minute warning.

The kick was down the middle but about a foot short.

“We had a perfect play call (before the sack) and probably would have scored a touchdown if we had gotten it off,” Bridgewater said.

But the Saints “schemed up that protection we had called well,” Bridgewater added. “I really had nowhere to throw the ball. So, I tried to step up and was going to throw it away.”

He did not get the opportunity. Defensive end Marcus Davenport wrapped him up to force a fourth-and-19 from the Saints 47.

Coach Matt Rhule said he decided a long field goal was the better of two bad options, rather than leaving his offense on the field.

Other than that, Bridgewater nearly matched Brees play for play.

New Orleans did not punt and Carolina punted only once.

Bridgewater connected with a wide-open D.J. Moore for a 74-yard touchdown to cut Carolina's deficit to 14-10 in the second quarter. He went 7 for 7 on the next drive, giving the Panthers their only lead on a shovel pass that Moore converted into a 7-yard score.

Bridgewater hit all four of his passes as the Panthers drove for a tying touchdown with 8 seconds left in the third quarter.

That was only Carolina’s fifth series. Its next was its last as Brees and the Saints kept sustaining long drives, running 67 plays to the Panthers’ 43.

“We didn’t have many possessions, so we just tried to maximize every drive that we had,” Bridgewater said. “We left a couple of plays out there today, and if you do that against a team like that, you get beat.”

Bridgewater earned his chance with the Panthers because of his performance with the Saints. He was coolly efficient after Brees went down with a thumb injury in the second week of 2019, completing 67.9% of his passes with nine touchdowns and two interceptions.

Those were the first meaningful games Brees missed in 14 years with New Orleans, and the first significant action for Bridgewater since he tore his ACL and dislocated his kneecap during training camp with Minnesota in 2016.

Instead of collapsing, the Saints kept winning until Brees returned, making Bridgewater a fan favorite in New Orleans. He signed a three-year contract with Carolina in March, and is on pace for career highs in completion percentage and quarterback rating.

On one play in the second half, Bridgewater scrambled out of bounds on the Saints sideline and sat down next to Brees and Saints reserve QB Taysom Hill for a second, also exchanging seemingly friendly words with coach Sean Payton.

“That was just so fitting of Teddy’s personality," Brees said. "He had to run a long way to take that seat and he knew exactly where we were sitting, right?

“Nothing but love for Teddy. He’s a great quarterback. He’s an efficient quarterback,” Brees continued. "Can’t say enough about him.”

Bridgewater played down any emotional or sentimental component to his return to the Superdome, putting his immediate focus on getting the Panthers (3-4) ready for a quick turnaround for Thursday's home game against Atlanta.

“To me, this was another game on our schedule,” he said. “Of course those guys hold a special place in my life and heart, but when I’m going against them, it’s a different approach. I just wanted to go out there and get our team in the end zone as many times as I could."