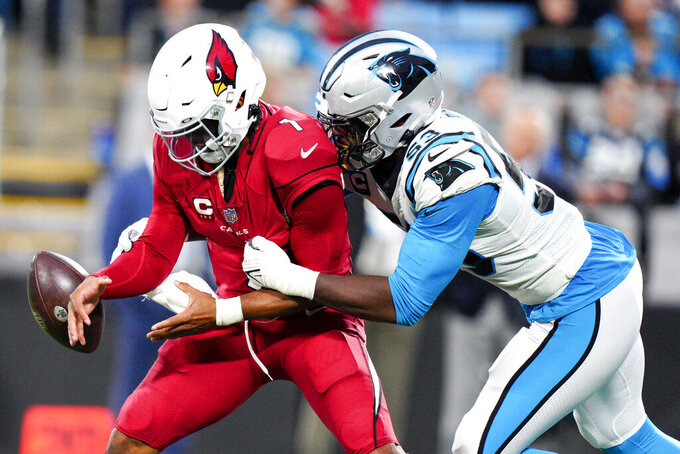 And for good reason.

Brady is 4-0 against Carolina since joining the NFC South, averaging 279 yards passing per game with eight touchdown passes and one interception while helping the Bucs outscore the Panthers 150-63.

But Brady and the Bucs' offense don't resemble the efficient unit of the previous two seasons.

Brady spent part of last Sunday berating his offensive line, angered by Tampa Bay’s ineptitude on offense during a 20-18 loss to the Pittsburgh Steelers. This week, he admitted the offense is far from a “finished product.”

Burns is hoping the Panthers (1-5) can take advantage — even though they won't have Christian McCaffrey on offense after he was traded to the San Francisco 49ers on Thursday night.

Burns is fully aware Brady remains a dangerous QB even at 45, particularly following a loss. The seven-time Super Bowl champion is 54-16 during his NFL career following a regular-season loss.

“He doesn’t like to lose twice in a row,” Burns said.

“The challenging thing about football is it’s the ultimate team sport,” Brady said. “We’re all in it together. In order to score points, you have to do a lot of things the right way. We’ve just got to keep working at it.”

Tampa Bay is averaging 20.2 points, down from just over 30 per game when they were second in the NFL in scoring under former coach Bruce Arians, whose offense emphasized pushing the ball downfield in the passing attack and thrived on big plays. The Bucs scored nearly 31 per game on the way to winning the Super Bowl two seasons ago.

When Arians retired last winter, Bowles was promoted to head coach after three seasons as the Bucs' defensive coordinator. He still calls defensive plays, but said this week he will not seek advice from his former boss to try to get the offense on track.

“This is my team, not Bruce’s team. We talk all the time, but you don’t jumpstart by asking a former coach what to do. We have our own things to deal with,” Bowles said.

“Obviously we have different players than we had last year,” Bowles added, noting the Bucs have several new starters, particularly on the offensive line. “We’ve got to approach things a little differently and find out what works for us this year, not last year and two years ago.”

Maybe the Panthers were simply focused on establishing the run game or maybe interim coach Steve Wilks simply didn’t trust P.J. Walker. Either way, the Panthers went super conservative with their play-calling last week and the result was an ugly 24-10 loss to the Los Angeles Rams.

Walker’s average intended air yards was 0.1 yards — which means that the average depth of his throws was barely past the line of scrimmage — according to NFL Next Gen Stats. He finished 10 of 16 for 60 yards with most of his completions coming on screens.

Carolina's only TD came on defense.

Walker will start again on Sunday, with Baker Mayfield and Sam Darnold still out with ankle injuries.

“I anticipate us doing whatever we can to win the football game,” said Wilks, when asked if the game plan will change this week. “If that is pushing the ball down the field or running the ball a certain amount of times, we will see exactly how the game flows.”

It's unclear at this point if D'Onta Foreman or Chuba Hubbard will be the primary back with McCaffrey gone. Hubbard would appear to have the upper hand, but it's possible the team could split carries between the backs. The Panthers are also high on rookie Raheem Blackshear, who has shown some speed while working as a kick returner.

The Panthers feel as though they have the best group of cornerbacks in the league when healthy.

The problem is they haven't had Jaycee Horn (ribs), C.J. Henderson (concussion) and Donte Jackson (ankle) on the field together all that much this season. Against the Rams, all three were out with injuries in the second half, leaving the Panthers very thin in the secondary.

Wilks said he hopes to have all three ready to play on Sunday.

The Bucs are 3-3 despite being plus-three in turnover margin and ranking fifth in the league in scoring defense. They’ve held five of six opponents to 20 points or fewer. Nevertheless, the defense shares responsibility for the .500 record because the unit has struggled to get off the field on third down, including last week when Mitch Trubisky converted on third-and-15 and third-and-11 to help the Steelers keep the ball for final 4:38 of a two-point Pittsburgh victory.