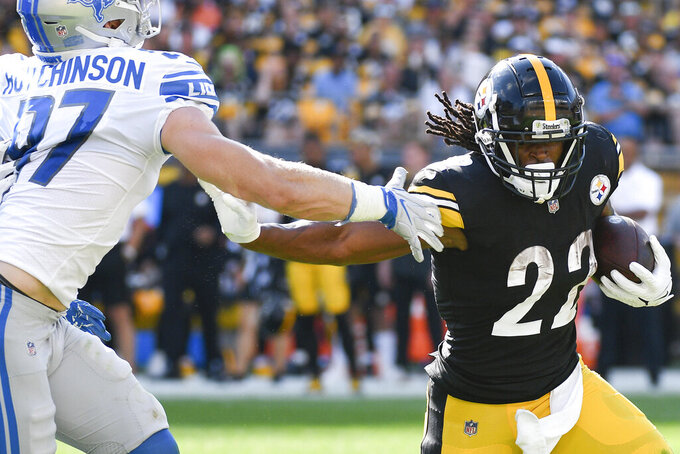 PITTSBURGH (AP) — The physical differences in Najee Harris are apparent. At least to those paid to make the Pittsburgh Steelers running back's job as easy as possible.

Yet there are differences off the field too, the kind that highlight the kind of growth that's more difficult to measure yet perhaps just as vital to Harris' — and by proxy the Steelers' — success.

The 24-year-old, second-year pro arrives earlier to meetings and has become a more avid note taker. He made it a point to take undrafted rookie free agent Jaylen Warren under his wing.

It's the thing leaders are supposed to do, a position Harris said the coaching staff and others have been grooming him for almost from the moment the Steelers selected him with the 24th overall pick in the 2021 draft.

It's not the first time in his life that others have asked him to take on a more visible role in the locker room. Harris admits he shied away from those requests because it wasn't a comfortable role.

“I wouldn't say it was (lack of) maturity,” he said Friday as the Steelers finished up preparations to face defending AFC champion Cincinnati on Sunday in the 2022 opener. “It (was) more just not being ready to take on that responsibility.”

He is now, one of the reasons Harris' teammates voted him as a co-captain for the 2022 season.

“He was destined to be captain,” defensive end Cam Heyward said.

Even if Harris wasn't exactly sure what the job entailed. Shortly after earning the title on Monday, Harris approached coach Mike Tomlin for a quick primer.

“He said, ‘What does this mean to me?’” Tomlin said. “I said, ‘It means absolutely nothing. It means conduct yourself in the way that you’ve conducted yourself because your teammates think that’s admirable.’”

Harris is a leader with the ball in his hands. He's a relentless worker, to the point where he admits getting into “arguments” with Tomlin and running backs coach Eddie Faulkner about the number of live reps he may get during a practice.

Tomlin and Faulker are doing their best to try to play the long game, aggressively managing Harris' playing time during the week in an attempt to keep him fresh for the grind of a 17-game regular season.

Harris isn't wired to embrace the downtime. Sure, he understands Tomlin's approach. He just doesn't necessarily enjoy it. He's paid to play football. He wants to play football. It doesn't matter if it's a Sunday in front of a packed stadium or a Wednesday on a practice field that's largely quiet save for the occasional whistle and the incessant hum of nearby trains.

The conversations between Harris and Tomlin were largely one-sided during the preseason. Harris injured his left foot early in training camp, a largely minor setback that allowed Tomlin to keep Harris under wraps without having to get into an esoteric discussion about the decision.

“They keep saying (practicing a lot) is not the best thing to do,” Harris said. “So I mean you could say (the injury) was a blessing in disguise. I don't want to get hurt but I mean like ... it comes with the sport.”

Harris proved plenty durable in 2021. His 381 touches led the league and his 1,200 yards rushing broke a franchise rookie record set nearly a half-century ago by Hall of Famer Franco Harris.

Harris welcomed the work even while the coaching staff grappled with “how much is too much" for their young star. To Harris, there is no such thing. It's one of the many reasons he couldn't help but roll his eyes near the end of 2021 whenever he was asked if he was worried about being on the field too much.

While the Steelers are hopeful backups like Warren and Benny Snell Jr. can spell Harris a little more frequently, Pittsburgh's hopes of taking some of the pressure off quarterback Mitch Trubisky relies heavily on Harris' ever-churning legs. He bristled during minicamp when asked about his weight. He's currently listed at 242 pounds, technically 10 pounds heavier than he was a year ago.

Good luck pinpointing where he put those 10 pounds. The 6-foot-1 Harris is somehow lean and thick at the same time. He's committed to taking better care of his body and his routine now includes a weekly visit from a massage therapist.

The goal is to play for a long time. How he can do that if he has the ball all the time is, well, not his problem to figure out. His relentlessness is one of the reasons he reached the NFL and one of the reasons he has gone from being on the fringe of the team's leadership circle to right in the middle of it in the span of a year.

NOTES: WR Diontae Johnson (shoulder) said he should be good to go against Cincinnati. The Pro Bowler injured his left shoulder in Pittsburgh's preseason finale against Detroit on Aug. 28. ... RT Chukwuma Okorafor (back) practiced Friday and is expected to start. ... The team announced players would wear a “3” sticker on their helmets in honor of former QB Dwayne Haskins, who died after being struck while walking on a Florida highway in April.