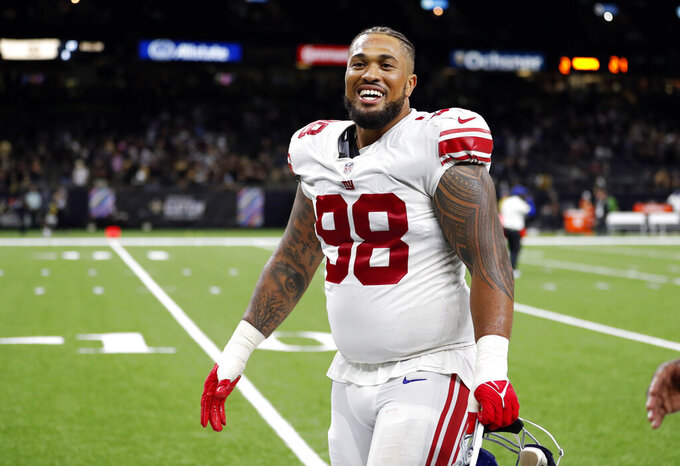 LOS ANGELES (AP) — The defensive line of the Los Angeles Chargers had two fatal flaws last season — it struggled to stop the run and there wasn't much versatility among the linemen. They are hoping the addition of Austin Johnson helps in both areas.

Johnson signed a two-year deal on March 16 to join the Chargers after having a career season with the New York Giants last year. The 27-year-old defender started all 17 games and finished with 72 tackles, including 3 1/2 sacks.

“We didn’t talk specifically where they want me, but like I said before, I love being versatile, love moving around and playing different positions, and just changing it up on the offensive line. I look forward to hopefully doing that,” Johnson said Wednesday.

The Chargers were 23rd in total defense, but 30th against the run last season. They allowed 138.9 yards per game on the ground, their worst showing since 2003. Teams averaged 4.64 yards per carry and scored 22 rushing touchdowns.

Johnson has mostly been considered a stout run stopper during his six seasons in the league. He was a second-round pick by the Tennessee Titans in 2016 before signing with the Giants last year. He played mostly defensive tackle last season, but also saw some snaps at end.

During his five seasons with the Titans, Johnson started only 13 games and was used mainly as a rotational lineman on running downs.

“Being stout in the middle. Making plays. Running sideline-to-sideline," Johnson said when asked to give a self-scouting report. "I feel like if you watch how I played last year, that will give you a very good answer about how I play and how I can help in that aspect.”

Johnson is expected to team up with Sebastian Jones-Day and Jerry Tillery on the defensive line. Jones-Day signed with the Chargers after four seasons with the Rams and has experience in Brandon Staley's defense. Staley was the Rams' defensive coordinator in 2020.

“We’re much closer to where we need to be. We’re not there yet,” Staley said. “It's about depth in this league, but these guys are the types of players that we’re looking for.”