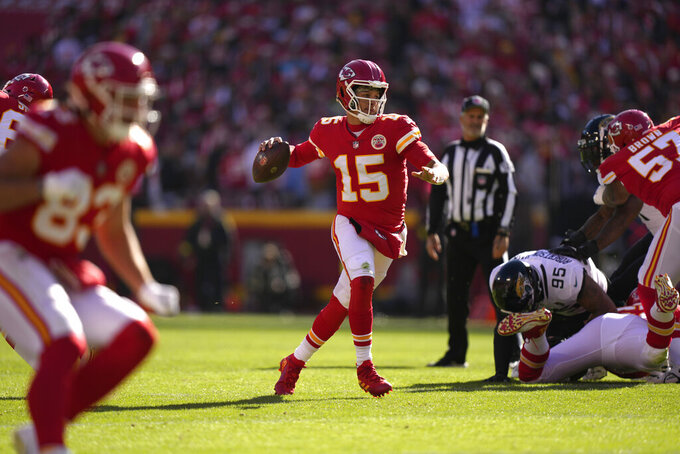 CHIEFS PLAYER TO WATCH: RB Isiah Pacheco, a seventh-round pick out of Rutgers, has supplanted 2020 first-round pick Clyde Edwards-Helaire atop the Kansas City depth chart. Pacheco ran 16 times for 82 yards a week ago against Jacksonville, which kept the Jaguars from selling out to stop Patrick Mahomes and the passing game. Edwards-Helaire was targeted twice without a catch and did not have a carry in the game.

CHARGERS PLAYER TO WATCH: OLB Khalil Mack, who got his seventh sack of the season against San Francisco, tends to save his best when facing Kansas City. He has 7 1/2 sacks in 10 meetings, picking up at least a half sack in six straight games. Mack brought down Mahomes once in the Week 2 loss, and he also had one of his nine tackles for loss for the season.

KEY MATCHUP: Chargers LT Jamaree Salyer vs. Chiefs DE Frank Clark. Los Angeles has been one-dimensional on offense, as demonstrated by its 37 drop-backs to 16 rush attempts against San Francisco. That imbalance puts a premium on pass protection, with rookie Salyer in a critical role. The Chargers gave up two sacks in the first half against the 49ers that forced them to settle for field goals when touchdowns could have put the game out of reach early. Clark had his best game of the season with 1 1/2 sacks against San Francisco before serving a two-game suspension for violating the NFL’s personal conduct policy. He is expected to return to the starting lineup, giving him a chance to end a run of three straight games against Los Angeles without a sack.

KEY INJURIES: Chiefs WR JuJu Smith-Schuster and CB Chris Lammons are in concussion protocol. WR Mecole Hardman is dealing with an abdominal injury. WR Marquez Valdes-Scantling missed practice with an illness this week. ... Chargers WR Keenan Allen (hamstring) and Mike Williams (ankle) are back at practice this week. Allen missed seven of the past eight games, making a brief return against Seattle in Week 7 before aggravating the injury. OLB Chris Rumph II should play after sitting out the past two games because of a sprained MCL. RT Trey Pipkins III (knee) has a better chance of playing this week after being pulled following warmups in San Francisco.

SERIES NOTES: Kansas City has won in overtime in both of its visits to SoFi Stadium, outlasting Los Angeles 23-20 in 2020 and 34-28 last December. ... This has mostly been a series of streaks since 2012. There was a run of four straight wins for the Chargers, followed by nine straight for the Chiefs in a stretch where they claimed 12 of 13. Los Angeles then took two in a row, before Kansas City won the past two meetings. ... In the past eight meetings, six have been decided by one possession.

STATS AND STUFF: Kansas City has won 11 straight games in November, a streak that began with a 24-17 win over the Chargers on Nov. 18, 2019, in Mexico City. ... The Chiefs have eclipsed 300 yards in 14 consecutive games, the third-longest streak in franchise history. ... Kansas City was not penalized last week against Jacksonville for the fourth time in its history. ... Mahomes threw four TD passes against the Jaguars, giving him 16 such games in his first 75 starts. He also has won 57 of his first 75 starts, trailing only Ken Stabler (58) for the most over that span to begin a career. ... Chiefs WR Kadarius Toney scored his first NFL touchdown last week in his second game since arriving in a trade with the Giants. ... Chiefs DE Carlos Dunlap had a half-sack against Jacksonville to give him 100 for his career. He is the 41st player to reach that plateau since sacks became an official stat in 1982. ... Kansas City has 13 sacks over its past three games. It had 31 sacks all of last season. ... The Chiefs’ Travis Kelce could break a tie with Rob Gronkowski for most 100-yard games by a tight end with his 33rd. Kelce has caught a pass in 136 straight games. ... While the Chargers have used a revolving lineup at the two offensive tackle spots, Matt Feiler and rookie Zion Johnson have been on the field at guard for all 635 snaps. ... QB Justin Herbert threw for a season-low 196 yards against San Francisco. It was just the third time in 41 starts he threw for fewer than 200 yards. ... RB Austin Ekeler has 67 receptions this season, fifth most in the league and tops for a non-WR. Kelce’s 63 catches are the next-highest tally for a non-WR. ... Getting Allen back would be a big boost even if he wasn’t highly productive against the Chiefs. Allen has at least five receptions for 50 or more yards in 12 of 13 games against the AFC West rival, averaging 6.3 catches for 71.8 yards. ... Williams has topped 100 yards receiving in three of his past four games versus Kansas City. ... The Chargers have three strip-sacks this season after leading the league with 11 last season. ... Los Angeles has outscored its opponents 109-54 in the second quarter. It has a minus-83 point differential in the other three quarters.

FANTASY TIP: Ekeler seems likely to get back into the end zone this week after having his run of five straight games with at least one touchdown snapped by San Francisco. His 30 scrimmage touchdowns over the past two seasons leads the NFL.