Chiefs hold first full-squad workout with jobs to be won 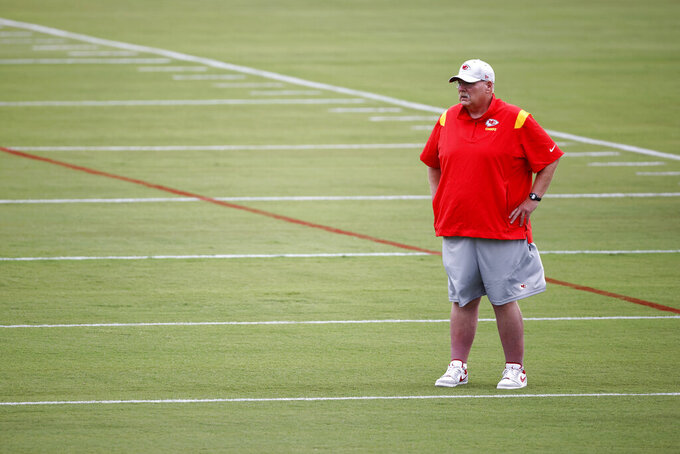 ST. JOSEPH, Mo. (AP) — Clyde Edwards-Helaire trotted down the long hill toward the Kansas City Chiefs' practice field, one day after he was placed on the physically unable to perform list, and the competition was on to be the starting running back this season.

Just like jobs at left tackle, cornerback and even wide receiver.

The Chiefs had their first full-squad workout of training camp on a warm, humid Wednesday morning with a cast that looks a lot different from how they finished last season. Edwards-Helaire is competing with Ronald Jones II and a bevy of others for carries in the backfield, the cornerback job opposite L'Jarius Sneed is up for grabs and, after the departure of Tyreek Hill and two other receivers, the pecking order for quarterback Patrick Mahomes is still to be determined.

"Looks like we're in good shape, got a little foundation there and we'll start building on that," said Chiefs coach Andy Reid, who wasted no time pitting tentative starters against each other with a crowd of thousands on hand.

Edwards-Helaire briefly landed on the PUP list Tuesday while taking care of his conditioning test, then joined Jones and the rest of the running backs in what should be a spirited competition the next few weeks. Jerick McKinnon is also back after a strong finish to last season with Derrick Gore and rookies Isiah Pacheco and Tayon Fleet-Davis.

The left tackle job is up for grabs — at least for now — with Orlando Brown Jr. holding out after turning down an offer from the Chiefs to make him the highest-paid offensive lineman in the league. Until he signs his franchise tender, the Chiefs are moving on without him, and Roderick Johnson got the first chance to take repetitions with the first-team offense.

“He was productive in the offseason so coming in we thought he could help out. We'll see how it rolls,” said Reid, who added that moving stalwart left guard Joe Thuney to offensive tackle is not under current consideration.

“We're going to keep rolling them in there," Reid said. "Nothing is solidified in there.”

The cornerback situation is in flux, too, with Charvarius Ward leaving in free agency and Rashad Fenton landing on the PUP list with a shoulder injury. First-round pick Trent McDuffie is the favorite to win a starting job, but fourth-round pick Joshua Williams also ran with the first-teamers Wednesday as he carves out a role in Steve Spagnuolo's system.

“There's something to be said for a fresh start and this is a new-look defense. We have a lot of new faces,” said another newcomer, safety Justin Reid, who picked off Mahomes for the highlight of practice. “We're going to be starting a lot of guys that are hungry and want to prove their worth as players.”

That includes a bunch of wide receivers who are no doubt tired of hearing about how the Kansas City offense could sputter without Hill in the mix. JuJu Smith-Schuster was the star of Day 1 with a couple of impressive catches — albeit without any pads on — while Marquez Valdes-Scantling and second-round pick Skyy Moore also got plenty of reps.

It could take all three of them to replace Hill's production, though that's not necessarily a bad thing. The Chiefs have given Mahomes more options in the passing game, and that in turn could make them more difficult to defend.

“The amount of routes I'm running — I think I've ran more routes out here than my previous offense,” said Smith-Schuster, who had been catching passes from Ben Roethlisberger in Pittsburgh the past five seasons.

“Being all over the field — inside, outside — that's everyone. So many guys playing so many positions. It's so nice moving so many guys around.”

The Chiefs are not expected to put on pads until next week, but Smith-Schuster nevertheless marveled at the speed of his first practice in Kansas City, along with the amount of running that Reid demands in training camp.

“I was hurt last year, didn't get to play a lot of ball,” he said, “and coming into this season, I'm going to let my play write the story. Making plays on the field. I came here to win; this is a team that wins. And I'm excited to be here.”

Notes: DE Frank Clark was late to practice because of an illness, Reid said. ... OLs Lucas Niang (knee) and Prince Tega Wanogho (leg) joined Fenton on the PUP list. ... TE Travis Kelce was at practice after agreeing to terms on a restructured contract that moves $3 million from the end of his contract to this season. The length of the contract did not change with Kelce signed to the Chiefs through the 2025 season.