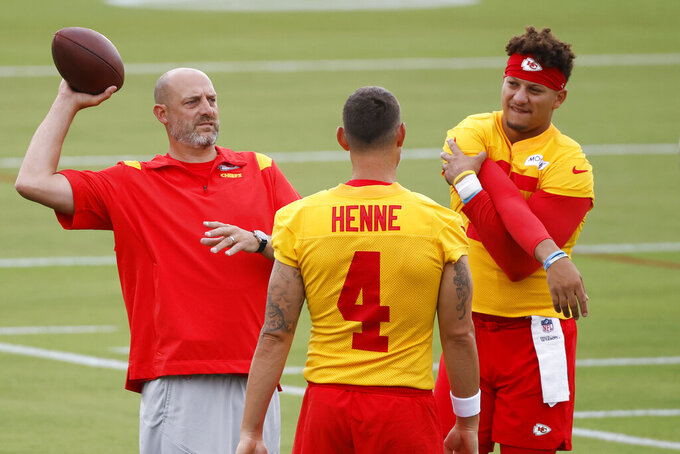 ST. JOSEPH, Mo. (AP) — Patrick Mahomes walked onto the practice field at Missouri Western State University on Sunday flanked by NFL rookies and longshots, many of whom dream of making in a year what the Chiefs quarterback will make by the end of the day.

Yet when the Chiefs open the season in Arizona on Sept. 11, Mahomes won't even be the best-paid QB in the game.

Yes, Mahomes set the market when he signed a 10-year, $450 million contract in July 2020, but that astonishing deal has been surpassed — in average pay and guaranteed compensation — multiple times over the past couple of years. And the latest to join the club with a skyrocketing quarterback contract is the Cardinals' Kyler Murray, whose 5-year, $230.5 million deal signed this week outpaces Mahomes in average pay by more than a million per year.

All of which is fine for Mahomes, whose inherent humility means he doesn't mind seeing others get their due.

“You want the salaries to keep going up, your players getting more and more,” Mahomes said. “When I saw my deal, I knew I was going to be pretty set for life, regardless of what the market kind of patterns. But you just keep playing. I mean, money is one thing, but when you get a Super Bowl ring in your career, I mean, that's the kind of thing you look back upon.”

Mahomes earned that ring with a victory over San Francisco on a warm Miami night in February 2020.

That's something missing from the resume of Murray, who lost the only playoff game of his first three seasons in the league, along with just about everyone else whose contract rivals that of the Kansas City quarterback.

There's the Bills' Josh Allen, who signed a six-year deal worth more than $258 million last August and whose 3-3 playoff record includes a dramatic overtime loss to Kansas City last season. And the Browns' Deshaun Watson, who is 1-2 in the playoffs, but who signed a five-year, $230 million deal that's fully guaranteed in March. And Dak Prescott of the Cowboys, who signed a four-year, $160 million contract last year despite having never played for a conference title.

Mahomes has played for the last four of those, winning two with the two losses in nail-biter finishes.

“I think especially the quarterback position, because the next guy or the top guy or any of these top-tier quarterbacks, they make such a difference in NFL games, that (contracts) are going to get passed up,” Mahomes explained. “And I mean, if you look at guys that signed last year to this year, they got passed up.”

He expects the same to happen when the Chargers' Justin Herbert and the Bengals' Joe Burrow sign new deals.

The Chiefs spent lavishly last offseason, both in free agency and the draft, to rebuild an offensive line that failed to protect Mahomes against Tampa Bay in the Super Bowl. And while general manager Brett Veach has still been forced to make some tough financial decisions — like trading away Tyreek Hill rather than give the wide receiver a record-setting contract — he's still been able to land players such as JuJu Smith-Schuster, Marquez Valdes-Scantling and Ronald Jones II to help out.

Mahomes understands the responsibility that comes with his hefty contract, too. That was evident this past offseason, when he invited wide receivers, running backs and tight ends to his home in Texas for some voluntary workouts.

“I want the Chiefs to be at the top of the rankings. I want to do whatever I can to put us in those positions,” he said. "That all comes with how you play on the field. You can have these offseason lifts and everything like that, but when it comes down to it, it’s going to be who’s there in the middle of February holding up that trophy and getting that ring. So, I think whenever you have that motivation to be the best and to win as a team then everything else kind of handles itself.”

Notes: The Chiefs practice again Monday with rookies and quarterbacks before veterans report later in the day. The first full-squad workout is Wednesday. ... WR Cornell Powell was the star of Sunday's workout with several impressive catches in traffic. ... LB Leo Chenal was back to work after leaving Saturday's practice early due to heat exhaustion.