Chiefs' Mathieu making important plays on and off the field 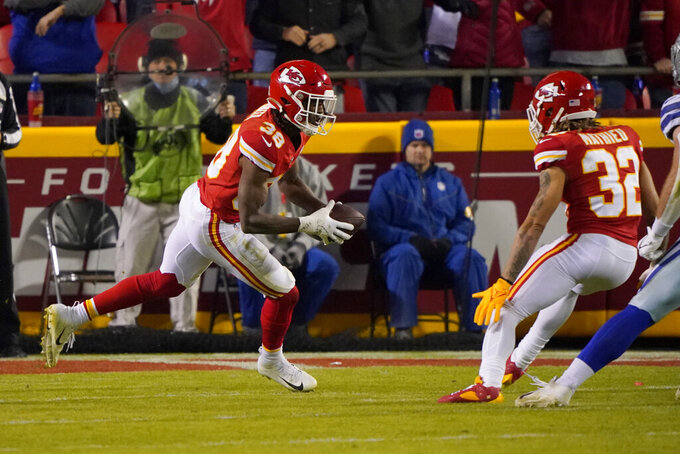 KANSAS CITY, Mo. (AP) — There may be no other time in Tyrann Mathieu's life that he's felt such an affinity for the place he calls home.

The three-time All-Pro safety arrived in Kansas City three years ago after a year-long stint in Houston, signing a $42 million deal that gave him some sought-after stability.

Through his foundation, designed to help underprivileged people in Kansas City and his hometown of New Orleans, he has packed out backpacks to school children and turkeys to families in need during the holidays. Mathieu led an event around National Voter Registration Day, raised money for COVID-19 relief and led donation drives for local food pantries.

That championship? He helped the Chiefs deliver that two years ago, ending a 50-year title drought in Kansas City.

No wonder Mathieu is the Chiefs' nominee for the Walter Payton Man of the Year this season.

“You know the work he puts in, not only on the field but off the field as well. He's done it in every single community he's been,” Chiefs quarterback Patrick Mahomes said.

“He truly cares about people, that's the biggest thing. He came up in a rougher background. He understands how much his impact can be to bring out the greatness in everyone.”

Just this week, Mathieu surprised a nurse at a Kansas City-area hospital with two tickets to the upcoming Super Bowl.

One that he hopes to be playing in again.

“We all grew up experiencing different things,” Mathieu said Wednesday. "For me, I play football because I love that part of it — the team part of it — coming together in the building, helping other people become what they want to be.

Mathieu said the importance of giving back really hit home during his time in Arizona. He was surrounded by veterans such as wide receiver Larry Fitzgerald and defensive lineman Calais Campbell who showed him how to be a professional.

“I was just blessed and fortunate early on to get both sides of it,” Mathieu said, “what it takes to be a great athlete and a great teammate, and what it takes to extend on that beyond the locker room.”

On the field, the former Heisman Trophy finalist from LSU has molded himself into one of the league's best defensive backs. He's started all but two games the past two-plus seasons, picking off 12 passes and returning two of them for touchdowns, while also serving as the one responsible for lining up the secondary most of the time.

“He's been through a lot in his life. He understands that people need him and he's able to share his experience with people,” Chiefs coach Andy Reid said. “The guys love him. They voted him captain every year. He's a good player, the players get how he's wired. He's very intense. He makes sure he ”mother hens" everybody out there and makes sure they're right."

Mathieu's contract is set to expire after the season, but the Chiefs — from chairman Clark Hunt through general manager Brett Veach and right down the line — have expressed their desire to sign him to an extension.

Mathieu likewise has said he would like to stay in Kansas City, where he's become intimately ingrained in the community.

“All you can really do is do your best, really show people who you are. If people decide to keep you around, that's really their decision, but it won't change how I do or why I do it,” Mathieu said.

“We won a championship, so I think that team will be really hard to forget; a lot of those players will be hard to forget. But this just feels like home.”

NOTES: CB Chris Lammons missed Wednesday's practice with a high-ankle sprain. Reid said that CB Josh Jackson, who was protected on the practice squad this week, could replace him on special teams. ... CB Rashad Fenton (knee) and RT Lucas Niang (ribs) returned to work after missing last week's game. “They're going to try it this week and get some work,” Reid said, “and then we'll just see how it goes.”