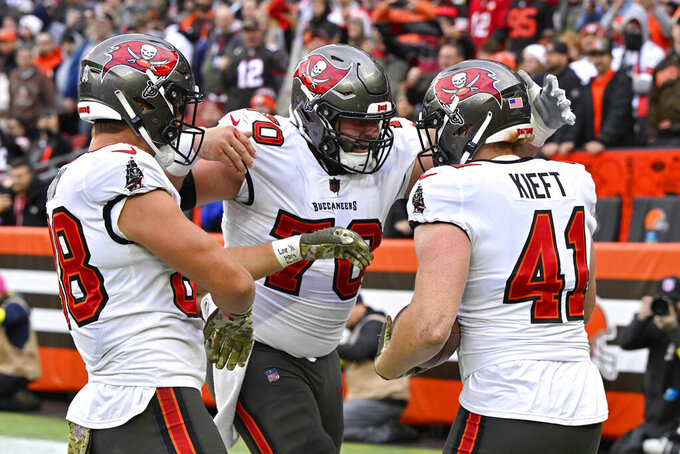 Tampa Bay Buccaneers tight end Ko Kieft (41) celebrates his touchdown with Robert Hainsey during the second half of an NFL football game against the Cleveland Browns in Cleveland, Sunday, Nov. 27, 2022. (AP Photo/David Richard)

After all, he's not leaving.

The Browns gave him one anyway.

Nick Chubb scored on a 3-yard touchdown run with 19 seconds left in overtime and Cleveland rallied Sunday to stun Tom Brady and the Tampa Bay Buccaneers 23-17 in Brissett's final start before Deshaun Watson returns from his 11-game suspension.

Afterward, the Browns gave Brissett a game ball before the popular 29-year-old channeled Brady, his former teammate in New England.

Chubb powered through a pile of bodies at the goal line as the Browns (4-7) sent Brissett off with a win as they transition to Watson, who was banned by the NFL for sexual misconduct allegations. He'll start next week in Houston, which traded him to Cleveland in March.

So this was a special one for Brissett, who has been invaluable to the Browns during another turbulent season.

“I’m obviously grateful for this opportunity and grateful for those men in that room,” said Brissett, who also threw a key block on receiver Anthony Schwartz's 31-yard TD run. “This was a great game to kind of end it on, but we have to stack them.”

Chubb's short TD was set up when Brissett c onnected on a 45-yard pass to wide receiver Amari Cooper, who found himself wide open when Bucs cornerback Carlton Davis III slipped and fell near midfield.

The Browns forced OT on tight end David Njoku’s remarkable, one-handed TD catch with 32 seconds left in regulation. Njoku extended his left arm to haul in Brissett's 12-yard scoring strike in the back of the end zone.

“I threw it, and I thought I threw it too high and I was about to start crying,” Brissett said. “I saw him pull it down, and I was like, ‘I could have ran up and kissed him.’ Clearly I didn’t.”

Brady threw two touchdown passes, but couldn't get anything going in the 10-minute OT as the Bucs (5-6) were unable to keep their momentum going following a bye.

“Seventeen points isn’t going to do it,” Brady said. "It’s been the same thing all year. We’re not scoring enough points. Every play is an individual win or loss, and we’re losing too many. There were too many plays where we were not on the right page, and we’ve got to correct that.”

Led by All-Pro end Myles Garrett, who had 1 1/2 sacks, the Browns held Tampa Bay without a point on its final seven possessions.

Garrett played the final minutes of regulation and OT in extreme pain after aggravating a shoulder injury sustained in a car crash.

“It hurt really bad," said Garrett, who intends to put off surgery until after the season. “I thought I had broken something.”

Brady completed 29 of 43 passes for 246 yards and was sacked three times.

Brady opened the second half by completing his first six passes, including a 28-yarder to Mike Evans, who became the first Tampa Bay player to reach 10,000 yards receiving.

The Buccaneers took a 17-10 lead when Brady connected with rookie Ko Kieft on a 5-yard scoring pass. It was the 638th TD pass for Brady, and No. 1 for Kieft, who is listed as the team's fourth-string tight end.

Stadium security personnel caught a skunk that was on the loose inside FirstEnergy Stadium during the game.

The critter was searching for food and hid under a step in the lower bowl section above the tunnel leading to Cleveland's locker room. The skunk was trapped with a box and released unharmed.

Large circular rings of tire tracks were still visible on Cleveland's field after an intruder broke into the stadium earlier in the week and drove a vehicle on the turf.

The unknown suspect, who broke into the stadium on Monday night, caused superficial damage and divots.

Police are investigating the incident, which forced the stadium's maintenance crew to make repairs to get the surface game ready.

Buccaneers: RT Tristan Wirfs was carted off the field in OT after sustaining an apparent serious leg injury. He favored the leg while walking in the locker room. "You hope it’s not as bad as it looks,” coach Todd Bowles said.

Browns: CB A.J. Green (head) left the field after making a low tackle late in the first quarter. An official noticed Green staggering and escorted him off.

Browns: Watson plays his first game in 700 days against the Texans, who drafted him in 2017.