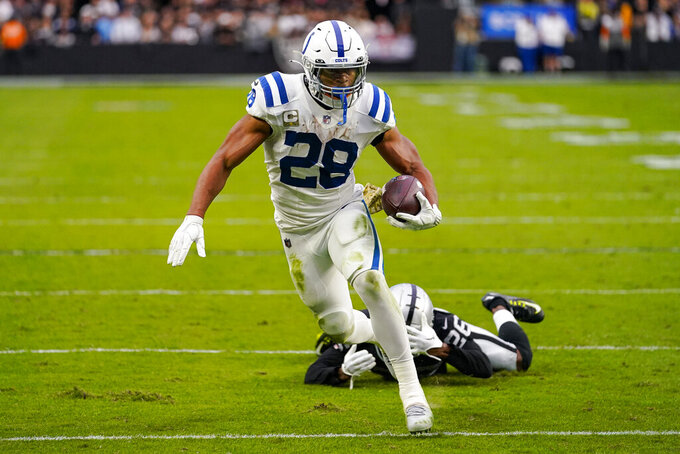 Nobody gave him, or his team, a chance. Saturday doesn't anticipate much changing this weekend with Philadelphia coming to Indy for his first home game as coach.

But after leaving Las Vegas with a win, the first-time NFL coach wasted no time delivering another message on the team flight home — emotions alone won't get the Colts into the playoffs. Only focused players and coaching can shed the label of underdog.

“Execution, to me, is doing exactly what we’re coached to do, so that if we have to solve problems midgame, we understand where everybody was supposed to be so that we can make an adjustment,” Saturday said less than 24 hours after logging a 25-20 victory in his coaching debut. “From an emotional perspective, to me, emotion usually runs out about midway through the first quarter.”

Somehow, despite a third consecutive turbulent week in Indianapolis, Saturday pushed all the right buttons and the Colts responded with their most complete game all season.

They ran the ball effectively and created explosive plays on offense. Defensively, they held Josh Jacobs in check and finished with a flurry — game-saving pass breakups on the Raiders' final two plays. And together, they snapped a three-game losing streak, a feat few thought possible amid the national debate over Saturday's readiness for the job.

But without the element of surprise, the emotional boost from a midseason coaching change or the return of Matt Ryan to the starting lineup, how can Indy (4-5-1) build on this momentum?

By following the same playbook Saturday employed last week — turning inward, ignoring outside noise and challenging the Colts to meet their own standards.

Linebacker Zaire Franklin saw Indy meet the challenge last week, and he's convinced it will continue to make a difference over the final seven games, too.

“It was really just a shift of a mindset and a refocus and, obviously, Jeff was the leader of that refocus," Franklin said. “It’s just understanding this is our season, our team, our story and our chapter to write and we want to do our part to make sure we have a good story."

Running game. For the first time since the season opener, league rushing champion Jonathan Taylor topped the 100-yard mark, scored a TD and ran effectively. Heck, even Ryan had a critical 39-yard run, a career long. Saturday knows this is the blueprint to success for Indy.

Takeaways. One year after finishing second in the league in turnovers forced (33), Indy has struggled mightily. It has nine takeaways through 10 games, and Sunday, for the third time this season, produced none. It's the one missing component from an otherwise impressive defense.

Ryan. Just a few weeks after it seemed as if his long, illustrious NFL career might be over, the 37-year-old made a comeback. He was so impressive in practice that Saturday started him Sunday and Ryan delivered by going 21 of 28 for 222 yards, one TD and no turnovers for the second time this season. If he keeps it up, Ryan could save Indy's season and extend his career.

Sam Ehlinger. Two-plus weeks after being named the starting QB for the rest of this season and just days after Saturday said he'd keep Ehlinger in that role. the second-year quarterback from Texas was benched. If Ryan continues playing well, Ehlinger's next start may be a long way off.

The Colts lost DE Kwity Paye again due to an ankle injury. It's unclear when Paye could return but if he's out, his absence, coupled with three-time All-Pro LB Shaquille Leonard going on injured reserve, will hurt. Saturday said Leonard wants another medical opinion about the back and ankle injuries that disrupted his offseason and the start of this season. It's unclear when Leonard will return.

1 — With rookie Bernhard Raimann at LT and Will Fries at RG, the Colts offensive line had its best game this season. Indy allowed only one quarterback hit Sunday, that being a sack, after yielding 35 sacks and 78 hits in the first nine games.

Saturday's coaching career got off to the best start possible — beating another struggling foe while giving fans hope for a turnaround. Replicating that feat against a foe with the best record in football would help prove team owner Jim Irsay made the right call last week. That's a big ask for an offense that has struggled with consistency all season. But another strong game from Taylor would give Indy its best chance to pull another surprise.