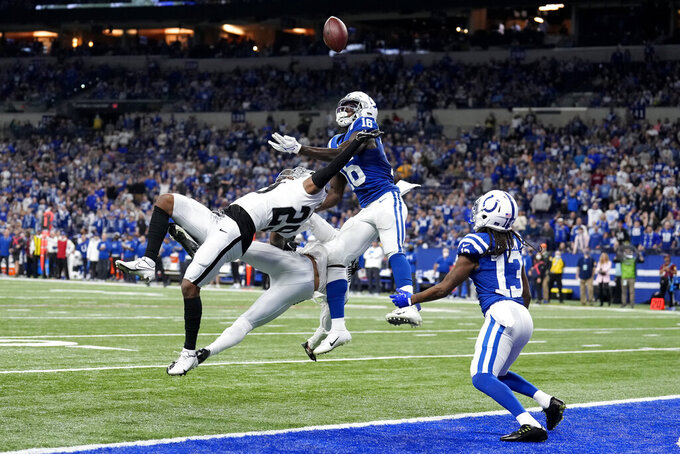 After spending one week plotting contingency plans, monitoring the COVID-19 status of so many key players and shifting to virtual meetings, the Indianapolis Colts coach couldn't fathom how this team blew a chance to clinch a playoff spot in front of its home fans.

By Monday, Reich had already moved beyond the 23-20 loss to Las Vegas, intent on making sure it doesn't happen again this weekend at Jacksonville.

“The playoffs start for us this week," Reich said. “Believe me, I had every intention of it not coming down to this last week. But I think in this business, we embrace it. You embrace the moment you have."

Indy positioned itself to do just that by fighting its way back from a 1-4 start to position themselves for the AFC's top wild-card spot. Instead, the playoff drive stalled out with a dud performance.

The good news for the Colts: What happens next remains entirely up to them.

Beat Jacksonville in the regular-season finale for the second straight year and Indy again will be playoff bound while the Jags again will lock up the No. 1 draft pick. A victory would give the Colts the No. 5, 6 or 7 seed in the AFC bracket.

A loss could make Indy one of the three remaining eligible teams heading home after next weekend. The Colts haven't won at Jacksonville since 2014 and another loss would be bitter way to finish the season.

And yet, their playoff future wouldn't necessarily be sealed by a loss, either, thanks to a 7-4 record in conference play.

But rather than playing out the complicated scenarios or spending Sunday night watching the Raiders-Chargers game to find out whether they'll play on wild-card weekend, the Colts have a simple solution to clean up what has been a muddled playoff chase.

Win and in — for the third time in four years.

“It’s going to take every ounce of effort and fight that we have," running back Jonathan Taylor said. “It's similar to what we did last year. Everyone came together — offense, defense, special teams — and we played a great game and that’s what it’s going to take next week because we know the history with Jacksonville. It's going to take everything we have.”

Taylor. Indy's second-year running back is breaking records, setting standards and running away with the NFL's rushing crown. Even on a day the offense got bogged down, Taylor still topped the 100-yard mark and scored a touchdown.

Punt coverage. The Colts have played reasonably well on special teams this season. On Sunday, though, Hunter Renfrow set up a first half field goal with a 41-yard punt return, and a 16-yard return led to the go-ahead touchdown in the fourth quarter.

Isaiah Rodgers. Indy's been thin at cornerback much of this season and Rodgers has become a key cog. He had four tackles against the Raiders, one interception and an additional pass breakup.

Carson Wentz. While Wentz produced decent numbers and took care of the football, Indy's offense was inconsistent. His timing seemed off after missing the entire week of practice because of a positive COVID-19 test. Wentz is unvaccinated.

Getting a full week of work before facing the Jags may be all the Colts really need to fix things.

The league's decision to follow new CDC guidelines by cutting the number of quarantining days from 10 to five certainly helped the Colts last week. Most of the key players returned Sunday and should be able to play in future weeks. But there will be two big questions this week. Starting cornerback Xavier Rhodes couldn't finish the game because of an injured right hamstring and safety Andrew Sendejo has not yet cleared the concussion protocol.

1 — The Colts spent most of this season trying to get back into playoff position. One more win gets them in.

The Colts promised they would play with more precision and focus this week. If they are to keep playing, they don't have a choice.