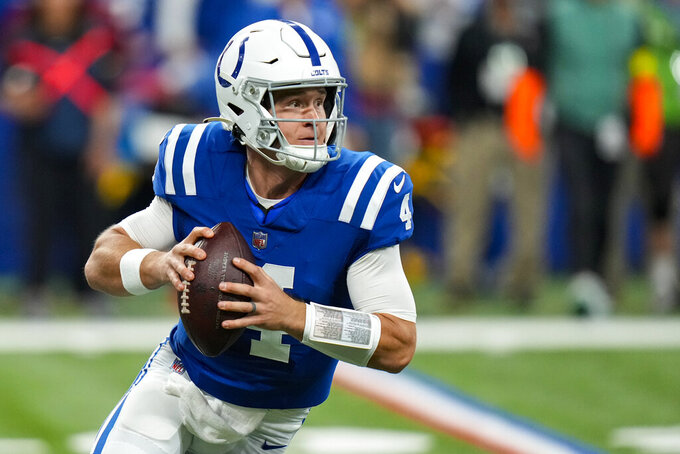 Indianapolis Colts quarterback Sam Ehlinger (4) looks to throw against the Washington Commanders in the first half of an NFL football game in Indianapolis, Sunday, Oct. 30, 2022. (AP Photo/AJ Mast)

TURNOVER DIFFERENTIAL: Colts minus-8; Patriots even.

COLTS PLAYER TO WATCH: Stephon Gilmore. The former New England cornerback returns four years after helping the Pats win their most recent Super Bowl. Gilmore was the NFL’s 2019 Defensive Player of the Year and has rebounded nicely from two injury-filled seasons. With turnover-prone New England still sifting through its quarterback situation, Gilmore’s aggressiveness could make for an interesting homecoming.

PATRIOTS PLAYER TO WATCH: Matt Judon. The linebacker has been the most consistent player on defense and is tied with Minnesota’s Za’Darius Smith with an NFL-best 8 1/2 sacks this season. He’s had at least one sack in all but two games this season.

KEY MATCHUP: Colts defensive line vs. Patriots offensive line. The Colts have nine players who have had a sack this season. They will likely try to put pressure on Patriots quarterback Mac Jones, who was sacked six times last week and is playing behind an offensive line in flux. Tackles Isaiah Wynn and Marcus Cannon have struggled lately, and rookie guard Cole Strange is coming off his worst performance of the season. Starting center David Andrews is out for the second straight week with a concussion, setting up James Ferentz to start again.0

KEY INJURIES: Colts three-time All-Pro LB Shaquille Leonard returned from nose surgery, but was on a pitch count last weekend. He’ll likely play a more significant role Sunday. Starting DE Kwity Paye has missed three straight weeks with a sprained ankle but practiced on Thursday and Friday. If Paye plays, it would help negate the season-ending loss of DL Tyquan Lewis (ruptured patellar tendon). Defending NFL rushing champ Jonathan Taylor’s is listed as out after he hurt his ankle last Sunday. ... Along with Andrews, WR DeVante Parker (knee) and Cannon (concussion) are also out. RB Damien Harris sat out the first practice of the week and is questionable.

SERIES NOTES: Indy snapped an eight-game losing streak against New England last season. ... Tom Brady made his first career start against Indy in 2001. Brady and Peyton Manning made this a must-watch rivalry over the next decade. ... Memorable moments in this series include Bill Belichick’s failed fourth down attempt in 2009, Indy’s ill-advised and failed fake punt in October 2015 and, of course, the “Deflategate” game in January 2015, a win that sent the Patriots to the Super Bowl.

STATS AND STUFF: The Colts have lost two straight after winning two straight. ... Coach Frank Reich benched starting quarterback Matt Ryan last week and fired offensive coordinator Marcus Brady on Tuesday. ... Second-year QB Sam Ehlinger will make his first road start Sunday. He was 17 of 23 with 201 yards, no touchdowns or interceptions and lost one fumble in his starting debut. ... Taylor has one TD this year, but his next score will send him past Hall of Famer Marshall Faulk (198) for the sixth-highest point total by a Colts player in his first three seasons. He needs seven points to pass Hall of Famer Lenny Moore (204) for fifth on that list and Taylor needs 49 yards rushing to surpass Curtis Dickey (3,490) yards for No. 10 on the franchise’s list. ... WR Alec Pierce leads all rookies with an average of 15.5 yards per catch. ... DT DeForest Buckner enters the game with 49 sacks. ... LB Zaire Franklin has had 80 tackles and four games with 10 or more tackles as he’s helped fill in for Leonard, who has played six quarters this season. ... Colts opponents have converted only 32.7% of third downs, the fourth-best defensive rate in the league. ... Indy is tied with New Orleans and New England for the most turnovers in the NFL (16) through Week 8. ... The Patriots enter the week tied for fifth in the NFL with 23 sacks. ... S Devin McCourty had two interceptions last week and is the NFL’s active leader with 33 picks. ... AFC Special Teams Player of the Week Nick Folk is in sixth place on the Patriots’ career list with 91 field goals and needs three more to move past Tony Franklin (93) for fifth place. ... DB Marcus Jones is second in the NFL with 308 kickoff return yards and a 23.7-yard per return average. ... DL Deatrich Wise Jr. has five sacks on the season, one short of establishing a career high. ... Parker is second in the NFL with a 21.4-yard per reception average.

FANTASY TIP: RB Rhamondre Stevenson is typically a good starting option and has been productive for the Patriots this season, averaging 4.9 yards per rushing attempt. But the Colts have been solid defending the run and have allowed just five rushing touchdowns to running backs all season.