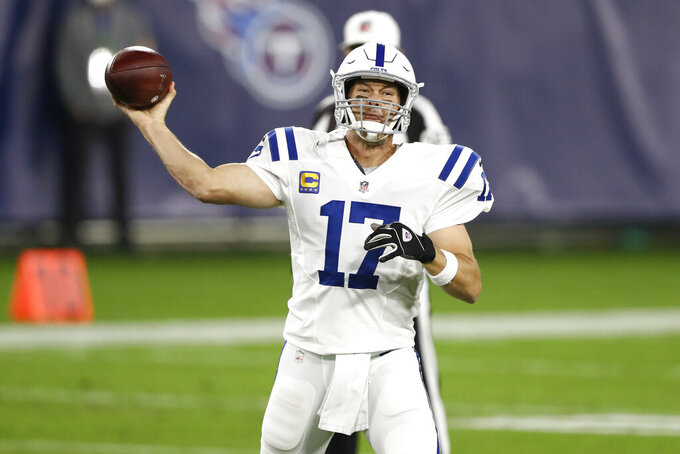 INDIANAPOLIS (AP) — The Indianapolis Colts sent an unmistakable message at Tennessee: Yes, they can beat anyone in the NFL.

Just four days after enduring an excruciating loss to Baltimore, Indianapolis posted its most critical win this season. It gave the Colts a share of the AFC South lead, an opportunity to seize control of the division by winning the rematch in two weeks, and the kind of momentum that goes far beyond the traditional win-loss calculus.

“We finished the way we needed to finish," Reich said. “We just kind of came in (at halftime) and said, ‘This is what we expected, a tight game.’ Just going back and forth. We felt like we were able to do some things, but we needed to lock in and finish it off, which we did."

By beating the 2019 AFC runners-up on their home field and at their own game, the Colts finally proved they belong in a conversation about the conference's top teams. Indy (6-3) entered the game with five wins over teams with worse records, and two losses against teams with better records.

And while it temporarily halts the comparisons to last season when another promising 5-2 start turned into a playoff-short 7-9 mark, the most crucial part about this win seemed to be the confidence boost Indy got.

It was evident in the Colts' post-game voices.

“I knew one thing, I didn’t want to settle for average," running back Nyheim Hines said after scoring two touchdowns. “I wanted to play great."

For one week, at least, this appeared to be the winning formula the Colts envisioned all along.

Philip Rivers threw for 308 yards and a TD in one of his most efficient games this season. Indy's sputtering ground game produced 133 yards, a healthy 4.6 yards per carry and two scores.

The league's No. 1 defense pitched a second-half shutout and largely kept rushing leader Derrick Henry in check. And on special teams, the Colts pressured Tennessee into one poor punt, which they eventually turned into a TD, and blocked another that was returned for the game-turning score.

Now, of course, the Colts must show they can continue to play this way when they face Green Bay on Nov. 22 and the Titans (6-3) on Nov. 29. Rivers believes they can.

“You've got to keep going because unless we continue to get better and win football games, we’ll look back at this one and say, ‘That was cool, but it didn't matter,' " he said. “This was a big game, even a bigger game after losing to the Ravens."

The no-huddle offense. Indy threw a change-up at the Titans on Thursday, and it helped Rivers and the offense get into and stay in rhythm for four quarters. Reich said they decided early in the week to give it a shot, and now it's one more wrinkle defenses need to prepare for.

The deep passing game. This has been a season-long problem. Most of the big plays have been manufactured from yards after the catch. Defenses continue to dare them to go over the top, but if the Colts' ground game churns out yardage like on Thursday, perhaps they'll take advantage of more downfield shots.

Hines' 24th birthday celebration did not include any backflips, but there was no doubt his energy gave the Colts a real boost. He had 115 total yards, ran for score and caught a TD pass — his third game this season with at least two scores.

DE Al-Quadin Muhammad. In a game where just about everything else went according to script, Muhammad was ejected in the waning moments after slapping the helmet of a Titans player. Reich acknowledged it's not something the Colts want or condone.

Cornerback Kenny Moore II left Thursday's game with a rib injury and is still being evaluated, Reich said. Tight end Jack Doyle went into the concussion protocol during Sunday's game and has not yet been cleared.

5 — Indy now has five touchdown returns this season: three pick-6s, a 101-yard kickoff return, and T.J. Carrie's score off the blocked punt. The Colts also have two safeties this season, and Hines returned two punts for scores in the same game last December.

The Colts get a few extra days to get rest. When they do return, they'll have two crucial home games that could help determine their postseason chances.