Colts trying to scratch off 7-game skid in Jacksonville 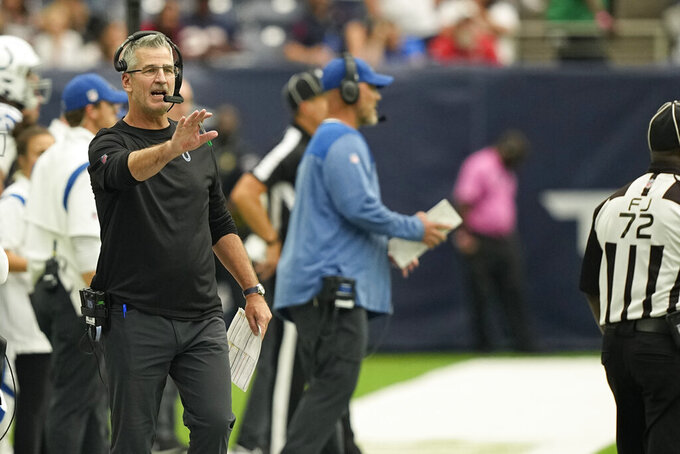 Players were repeatedly asked to describe what went wrong in another inexplicable loss to the Jaguars.

General manager Chris Ballard made a quarterback change. And there remains an empty spot inside the Colts practice facility where a playoff banner might have hung — had they snapped the losing streak at Jacksonville at six.

Instead, 8 1/2 months later, the thoughts are coming back as the Colts try to end what is now a seven-game skid when they visit the Jaguars on Sunday. Clearly, they're motivated.

They should be. For the second straight week, Indy can change the conversation.

Last week's outside chatter focused on ending an eight-game, opening-day losing streak. It ended with a 20-20 tie at Houston though the Week 1 winless skid remains intact at nine.

Now, in Week 2, the Colts can erase another futile milestone.

Their previous win in Jacksonville came Sept. 21, 2014, something they insist is more aberration than jinx. But nothing they've tried has worked.

During this losing streak, the Jags have endured six losing seasons, played for an AFC championship, earned the No. 1 overall draft pick in consecutive years and had five head coaches including Gus Bradley, Indy's new defensive coordinator.

The Colts, meanwhile, have lost during good seasons and bad. Andrew Luck lost in each of his last three trips, and loss No. 6 came as Philip Rivers made his Indy debut in 2020. It was the Jags only victory that season.

While all the losses stoked the emotions, none proved more excruciating or demoralizing than the stunning, stinging 26-11 loss that sent Indy home in January instead of onto the deep postseason run some expected.

Those sentiments stuck with the Colts even as they returned for offseason workouts in April.

And when it came up at the team facility, those who experienced the ramifications of that loss vowed to never let something like that happen again.

“We needed that one more win and we didn’t come through. It was a terrible feeling and it lingered for a while,” Pro Bowl defensive tackle DeForest Buckner said at training camp. “Coming into this offseason, OTAs, we mentioned it and then put it in the rear view, pressed on and moved forward.”

Yes, much has changed since these teams last met.

Foles and defensive end Yannick Ngakoue, both of whom played with and left Jacksonville during this streak, will now get a different view of this AFC South rivalry — from the visitor’s locker room. Ballard acquired Ngakoue from Las Vegas in an offseason trade; Foles signed as a free agent.

Matt Ryan, Indy's newest starting quarterback, could change things with his presence. He's 4-0 against the Jags though he only made the short trip from Atlanta to Jacksonville twice in his previous 14 NFL seasons.

Others have not forgotten.

“Whenever you play a team again, you do kind of look back a year to see how that game went," linebacker Zaire Franklin said. “They're a good team with new players, a new coaching staff and we're looking forward to the challenge of facing Jacksonville.”

Ready to show they can win this time, too.

Whether it was the meeting team owner Jim Irsay called with Reich and Ballard upon their return from Jacksonville or Jonathan Taylor's offseason commitment to making sure he makes every possible play to avoid a repeat of Indy's 2021 late-season collapse, one thing is clear.

The Colts intend to take care of this seven-year itch.

“We have a great chance to go down there and win,” center Ryan Kelly said. “Sure it's been a while and sure the media keeps talking about it, so it is what it is.”