Column: US lands 2031 Rugby World Cup, if anyone cares 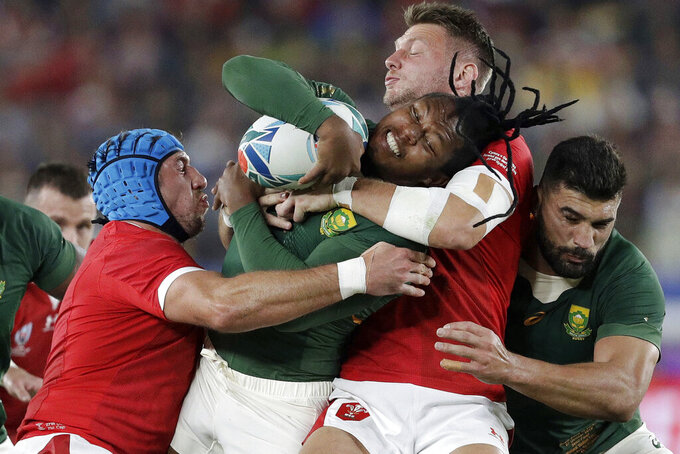 The United States has landed another World Cup.

Before you start celebrating or making travel plans, a couple of caveats:

It's still more than nine years away.

And, uh, it's the Rugby World Cup.

The sport that most Americans have only the vaguest of knowledge about — hey, doesn't it sort of resemble football, just without the pads, helmets or forward passes? — will bring its biggest event to this country in 2031 (along with the women's version in 2033).

While the Rugby World Cup ranks only behind the Summer Olympics and soccer's World Cup in some corners of the planet, that's certainly not its place in the U.S.

Quick, who is the reigning world champion? Where will the next Rugby World Cup be played?

Even with nine years of lead time to develop the game and build up interest, it's hard to see how rugby ever carves out more than the tiniest of niches in the American sporting scene.

But some folks are ready to take on the challenge.

“Listen, we know in the U.S. there's a lot of competition for consumer dollars,” said Amanda Windsor White, president of Rugby ATL, Atlanta's team in the sport's top U.S. professional league. “We have to work a little bit harder from the marketing perspective to build awareness and give potential fans a reason to come check us out.”

For those who haven't noticed, Major League Rugby is a 13-team league that was launched in 2018. While the number of teams has nearly doubled during the league's brief history, it has yet to generate a lot of interest, playing mostly in tiny stadiums before sparse crowds.

But World Rugby, the international governing body, is eager to expand its game beyond the traditional hotbeds of South Africa, Australia, New Zealand, Britain, Ireland, France and the South Pacific islands.

White and others in MLR hope to capitalize on that push. She believes the physical nature of rugby is a natural for American sports enthusiasts, not to mention the social traditions such as tailgating and players from both teams getting together after matches to raise a few beers.

“We know there are people out there who like to be trendsetters,” White said. “Once they're exposed to it, they're gonna love it.”

The last World Cup, in 2019, was played in a non-traditional country for the first time. Rising power Japan hosted a tournament that ran into some major problems, from the proposed main stadium in Tokyo not being completed on time to the unprecedented cancellation of three matches because of a typhoon.

But the experiment was generally considered a success, with average crowds of more than 37,000 and host Japan reaching the quarterfinals before losing to eventual champion South Africa.

(Note: That's the answer to our earlier query. Also, the next World Cup will be played in France in 2023.)

Japan is the country generally held up as the model that World Rugby hopes to emulate in the United States with its national team, known as the Eagles.

In the lead-up to the 2019 World Cup, Japan received significant coaching expertise from the world governing body and more opportunities to play top nations in test matches.

That formula will now be tried in the U.S., in hopes of using the next nine years to build the Eagles into a team that could possibly qualify for the quarterfinals by 2031.

“We have to build our talent now,” White said. “We want to show on a global stage that USA Rugby can compete with best of 'em."

The Eagles are certainly far from that standard at the moment.

While the U.S. has played in every World Cup except one since the inaugural tournament in 1987, it hasn't come close to advancing out of group play, winning just three of 25 matches and being outscored 892-350.

Any attempt to turn the U.S. into the next Japan will run into some significant roadblocks.

Most notably, there are far more team sports — football, baseball, basketball, hockey, and soccer — with significant followings in this country, making it more difficult for rugby to attract top-level athletes and be heard above the noise.

And unlike soccer's World Cup, which will largely have the spotlight to itself in the summer of 2026 when United States hosts along with Mexico and Canada, rugby's biggest event is usually held in September and October.

That timeframe, of course, conflicts with the busiest part of the sporting calendar in America.

The NFL and college football are in the early part of their seasons, while Major League Baseball is winding down its regular season and moving toward the World Series. Major League Soccer could be in the midst of its postseason and, oh yeah, the NBA and NHL start their seasons in October.

Which begs the question: What if they held a Rugby World Cup and nobody in the host country noticed?

Another potential problem: While soccer's World Cup pretty much has its pick of prime venues in 2026, the facilities that would be used for rugby — generally, NFL and MLS stadiums — are being used by their primary tenants in September and October.

That could force a U.S.-based tournament to move from fall to late summer, which would fit much better fit within the U.S. sporting calendar. Then again, it would be a brutal time to hold games, with the oppressive heat undoubtedly affecting the quality of play.

Of course, Americans love major events — even major events they know little about. Twenty-four cities, including nearly all of those currently in the running to host World Cup soccer games in 2026, have expressed interest in taking part in the rugby counterpart.

Given the country's financial strength and organizational skills, the 2031 Rugby World Cup will likely be a success.

Whether it has any significant impact before — or after — the actual tournament, well, that's far from a sure bet.