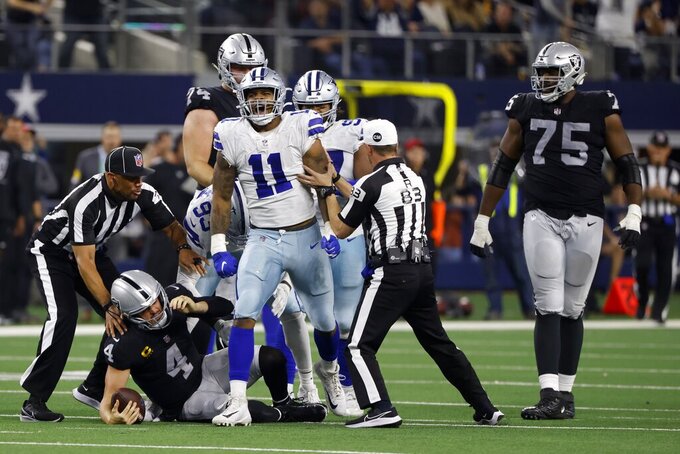 ARLINGTON, Texas (AP) — The Dallas Cowboys struggled through a November trip through the AFC West that took plenty of luster off their incredible start, even as they still control the NFC East.

After forcing overtime Thursday, the Cowboys had two more untimely penalties after they got the ball first before losing 36-33 to the Las Vegas Raiders. It was the third loss in four games for Dallas, all against AFC West teams.

From a 6-1 record after a Halloween victory at Minnesota, the Cowboys finished their annual Thanksgiving Day game 7-4. They won't play at home again until the day after Christmas.

“That certainly (was) a home game we all hoped that before we got on the road that we could win this game,” Cowboys owner Jerry Jones said. “Oakland took advantage of the situation. I call it throw-up ball. Right way to play in a game like this, just throw it out there and get a penalty.”

Daniel Carlson's game-ending 29-yard field goal came after cornerback Anthony Brown was called for pass interference on a third-down incompletion for the fourth time. That was part of a franchise-record 166 penalty yards against Dallas on the 14 flags that were enforced.

After that 33-yard penalty marked to the Dallas 24, the Raiders (6-5) had two running plays to set up the kick that ended their three-game losing streak.

“It’s frustrating, but at the same time you’ve got to deal with it. You’ve got to fight through it,” Brown said. “The other team’s dealing with it, too. They’re getting called, too. We can’t complain about that.”

Without their top two receivers and with Ezekiel Elliott still playing through a lingering knee injury, Dallas still had 437 total yards and forced overtime on Greg Zuerlein 45-yard field goal.

But the Cowboys were plagued by the penalties throughout, including an illegal block on the kickoff return that forced them to start their overtime possession from their own 7.

The month of November began for Dallas with a 30-14 home loss to Denver, which led 30-0 in the the fourth quarter. The Cowboys then had a 43-3 win over Atlanta at home the next week before losing 19-9 at Kansas City last Sunday.

Dallas now plays three games in a row on the road, next Thursday at New Orleans before division games against Washington and the New York Giants.

Receivers CeeDee Lamb (concussion) and Amari Cooper (COVID-19 protocols) are expected back for the Saints game. Defensive end DeMarcus Lawrence (broken foot) could also play for the first time since the season opener.

The Eagles (5-6) and Washington (4-6) both have won their last two games heading into matchups this weekend against 3-7 teams. The next home game for Dallas is in prime time Dec. 26 against Washington.

“We’ve got help on the way, we’ve got young guys that are playing hard,” Jones said. "We’ve got a tough schedule ahead of us. I’m not talking relative to other teams and strength of schedule. We just walk out here and play any team, and we know we’ve got our hands full any any game.

By Tom Withers 38 minutes ago
By Dave Campbell 6 hrs ago
By Kyle Hightower 2 hrs ago
By Tom Canavan 3 hrs ago
By Teresa M. Walker 4 hrs ago