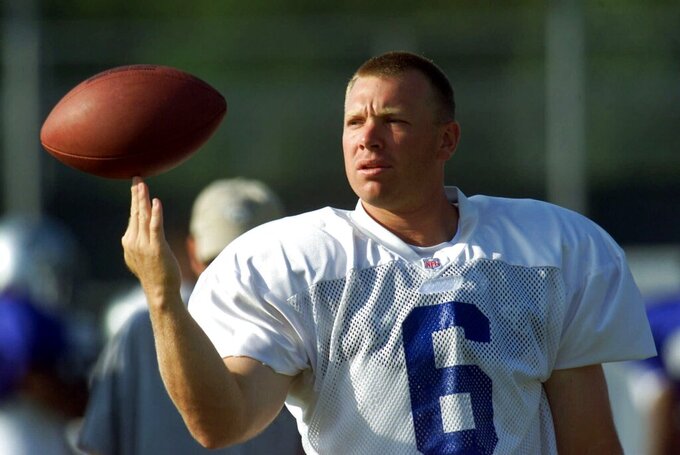 FILE - In this Friday, July 27, 2001 file photo, Dallas Cowboys kicker Tim Seder kills time by spinning the football on his fingers before the start of special teams practice at training camp in Wichita Falls, Texas. The first game between 1-5 Washington and the 2-4 Dallas Cowboys since the name change is also the longtime NFC East rivals’ first meeting with this bad a combined winning percentage since 2001. That was a 9-7 game kicker Tim Seder won with a 26-yard field goal as time expired after a collision with a horse on the field during warmups. (AP Photo/Donna McWilliam, File)

LANDOVER, Md. (AP) — The previous time the Dallas Cowboys and Washington faced off with a combined record worse than this, the longtime NFC East rivals were each 0-4 and the 2001 "Gutter Bowl” got off on the wrong foot.

During pregame warmups, Dallas kicker Tim Seder collided with a horse who was on the field for some reason. The horse backed into his kicking leg, Seder missed two field-goal attempts but wound up scoring all of the Cowboys' points, including a 26-yard game-winner to make it 9-7 when time expired.

“Could’ve been ugly, but I think we survived and it ended up being OK,” Seder told The Associated Press by phone Wednesday night. “You’re just proud of your team that they keep fighting and you’re in a position to win at the end of the game, and you want to put your best foot forward, so to speak, to finish the deal.”

Dallas-Washington won't have a horse on the field — or fans in the stands — this time, but it could go a long way to determining which team wins a bad division.

The Cowboys (2-4) and now nick-nameless Washington (1-5) are in the thick of the race, even though each team has a different starting quarterback than it began the season with.

Dak Prescott's broken ankle forced Andy Dalton into action for Dallas under first-year coach Mike McCarthy. Ron Rivera saw how the NFC East was sputtering and pulled the plug on 2019 first-round pick Dwayne Haskins' development because he believed Kyle Allen gave Washington a better chance to win in his first season in D.C.

Pending the outcome of Thursday night's game between the New York Giants (1-5) and Philadelphia Eagles (1-4-1), Dallas at Washington on Sunday could be for a share of first place.

“The opportunity that we have, it’s right in front of us," McCarthy said. "You clearly understand what our division looks like, and the importance to get this win, it did not change with the quarterback situation.”

If anything, the QB situations are under the microscope given what's at stake. Dalton tossed two interceptions in a 38-10 defeat to Arizona on Monday night in his first start since replacing Prescott, and Allen had a pick, lost a fumble and threw an incomplete pass on a last-minute 2-point conversion attempt to lose to the Giants 20-19.

Yet, Washington can still say it's in the running for the NFC East title more than a third of the way through the season despite a five-game skid.

“For us to have those growing pains and still at this point be only one game out of first place is incredible,” Allen said. "We’re looking at that very hopeful and understanding the situation that we’re in.”

The Cowboys look at it like they've fumbled away their chance to build a substantial division lead. Running back Ezekiel Elliott, who lost two fumbles against the Cardinals, said he and his teammates “are going to get this thing right.”

“The beauty of it though is we’re still first place in the division,” Elliott said. “We still hold the keys to our future. Now it’s up to us to get this thing right.”

That's how Seder, now a high school football coach in the Dallas area, looked at it 19 years ago. It hasn't changed for his beloved Cowboys and what's now the Washington Football Team in the first of at least two games — and maybe more — without a real name.

“You’ve just got to find a way to win a ballgame,” he said. “Sometimes you just got to step back and say, ‘Hey, let’s do something well,’ and when you get an opportunity, take advantage of the opportunity.”

Elliott’s five fumbles (four lost) through six games are already within one of his single-season career worst set two years ago. The two-time rushing champion said he spent time this week watching clips of “all my fumbles ever,” including high school.

“Just kind of studying my fumbles and seeing where things went wrong and what I can do to keep that ball tighter and have better ball security,” Elliott said.

“Well, if you want, you should put the tape on and go find out,” he said with a chuckle. “I don’t want to give away all my weaknesses right here.”

Rivera has come under fire for abandoning his plan to build and develop this season, specifically benching Haskins and turning to Allen after Week 4. Three weeks and three losses after saying he believed there was a “cutoff point” for a struggling QB such as Haskins, Rivera contradicted himself Wednesday and said he'd stick with Allen “as long as I feel I can.”

“I made a decision based on what I was watching and what I was seeing, and that’s what happened,” Rivera said. “It’s about watching him and if I’m seeing what I want to see or not.”

All-Pro right guard Zack Martin is expected to be out for the Cowboys after getting a concussion early against the Cardinals. That means the Cowboys will be missing four of the five preseason starters on the offensive line. The last man standing is third-year left guard Connor Williams.

The Cowboys are also going to be on their third left tackle after Brandon Knight injured a knee against Arizona, had surgery and will miss at least a couple of weeks.

After Dallas opened as a 3 1/2-point favorite, the line is now a pick 'em after the Monday night debacle.

Friends and family will be the only people in attendance at FedEx Field despite Maryland Gov. Larry Hogan allowing teams to fill outdoor stadiums to 10% capacity, so the traditional edge for home teams is moot. Perhaps the shift underscores just how unstable the NFC East is from top to bottom.