Dalvin Cook returns at RB for Vikings vs. Steelers 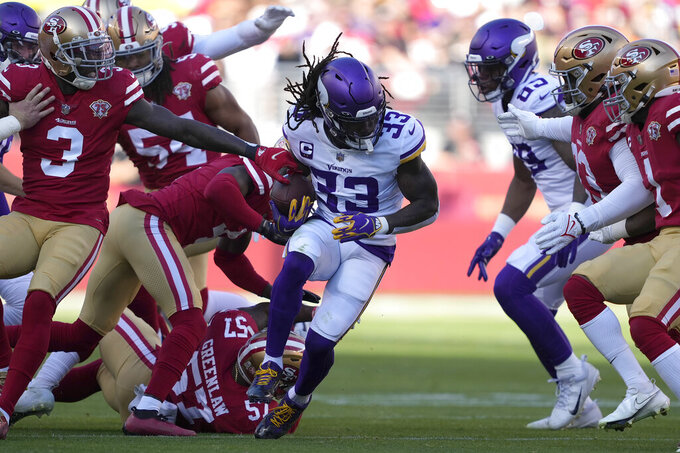 Minnesota Vikings running back Dalvin Cook (33) runs against the San Francisco 49ers during the first half of an NFL football game in Santa Clara, Calif., Sunday, Nov. 28, 2021. (AP Photo/Tony Avelar)

MINNEAPOLIS (AP) — Minnesota Vikings running back Dalvin Cook has returned to the lineup for a critical game against Pittsburgh, after missing just one week with a shoulder injury.

Cook was on the active list for the Vikings to face the Steelers, despite the shortened recovery time with the Thursday night game. He sat out last Sunday at Detroit after getting hurt Nov. 28.

Also on the inactive list were quarterback Kellen Mond, cornerback Harrison Hand, defensive end Tashawn Bower and linebackers Chazz Surratt and Blake Lynch. Lynch was listed as questionable with a hip injury after starting in Anthony Barr's place last week. Barr and fellow starting linebacker Eric Kendricks were back from a one-game absence to face Pittsburgh.