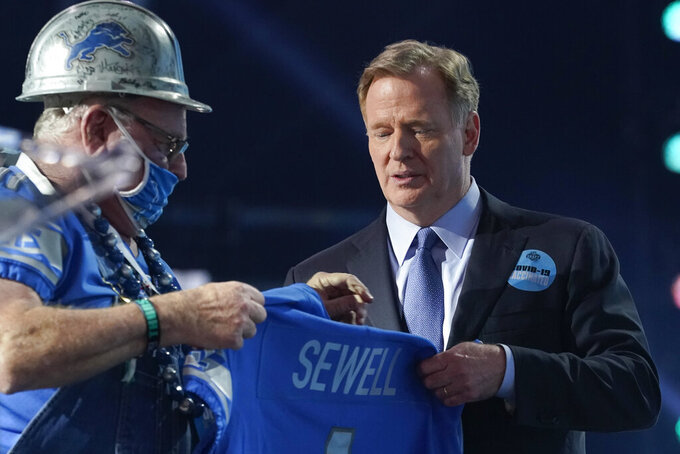 A Detroit Lions fan, left, who was chosen to be on stage, holds a team jersey with the name of the team's first-round pick Penei Sewell, an offensive lineman from Oregon, at the NFL football draft Thursday April 29, 2021, in Cleveland. (AP Photo/Tony Dejak)

DETROIT (AP) — When Detroit Lions coach Dan Campbell took the job, he made it clear toughness and physicality would be a priority.

It's no surprise, then, that the Lions spent the first two days of the NFL draft adding size.

Detroit selected a pair of defensive tackles Friday night, taking Levi Onwuzurike of Washington in the second round and Alim McNeill of N.C. State in the third. Later in the third round, the Lions took another defensive player — cornerback Ifeatu Melifonwu of Syracuse.

Those selections came a day after Detroit took offensive lineman Penei Sewell with the No. 7 pick.

Onwuzurike played mostly nose tackle with the Huskies. He was a second-team All-American in the preseason, but he opted out of the 2020 season.

“It was real difficult just watching my boys out there,” Onwuzurike said. “I was real proud of them, real proud of what they did that season. It was for sure hard to watch. I felt like I went back to being a fan.”

Onwuzurike has played against Sewell when Washington faced Oregon.

“One of the quickest players I've ever played against,” Onwuzurike said. “Very balanced, very big, but also has an athletic build. He's almost like a tight end at the tackle position. He's elite.”

“When I talk about how explosive he is, I heard his press conference was pretty explosive as well," Holmes said. "I didn’t get a chance to hear it yet, but you kind of see the personality and fire that he’s got in him.”

Onwuzurike entertained Detroit-area reporters on his introductory Zoom call with his carefree attitude. He sprinkled expletives liberally into his responses and seemed excited to be drafted, even though he wasn’t taken until the second day.

When Onwuzurike spoke, it was easy to think about Campbell's arrival in January, when he said the Lions would be the type of team that would “kick you in the teeth” and that "when you knock us down, we’re going to get up and on the way up, we’re going to bite a kneecap off.”

McNeill, the draft's 72nd pick, made the AP's All-Atlantic Coast Conference first team this past season.

McNeill, now a beefy lineman, actually played some running back in high school. He was also an outfielder in baseball.

“Baseball was actually my first sport,” McNeill said. “I didn't see myself as a big guy in the outfield, honestly. I see myself as an athlete out there, just making plays, tracking balls down.”

Melifonwu had 88 career tackles and three interceptions in college. He was drafted with pick No. 101.

Melifonwu's older brother, Obi, has played in the NFL for the Oakland Raiders and New England Patriots. He was waived by the San Francisco 49ers on Friday.