Drafting a quarterback in play for Redskins in early rounds 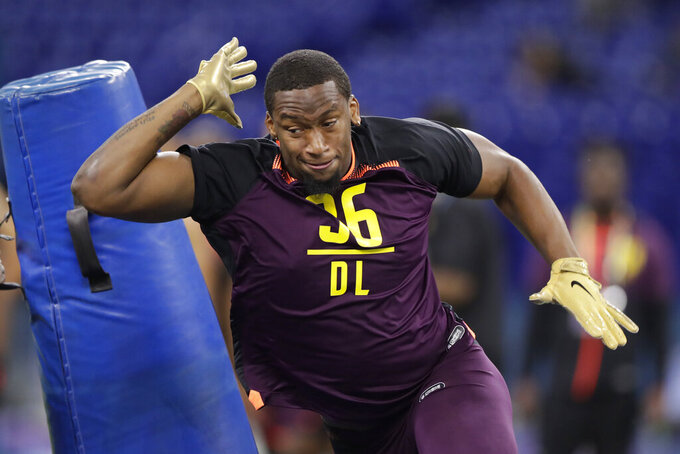 ASHBURN, Va. (AP) — Just when the Washington Redskins thought they found their long-term solution at quarterback, they're back to the drawing board.

More than a year after trading for and extending Alex Smith and a month after acquiring Case Keenum, Washington is still in search of its future at the position. Smith's broken right leg will likely cost him the entire 2019 season and maybe beyond, so the 15th pick in the NFL draft or any of several after that could be used on a developmental quarterback.

"There's some good young talented guys that if you have a chance to get one, they're hard to find," coach Jay Gruden said. "And if you really feel good about one, you'll have to take him because that is the position. You talk about all this other stuff, that's the position that will take you to the promised land."

Keenum and longtime backup Colt McCoy are expected to compete for the starting gig next season. Could Duke's Daniel Jones, Ohio State's Dwayne Haskins or Missouri's Drew Lock also be in the picture?

After going over the team's draft board with the rest of the front office on a recent morning, senior vice president of player personnel Doug Williams isn't ruling anything out.

"There's a lot of guys up there, whether we're at 15 or we move up or we move back or what have you," Williams said. "You're always open. This is a quarterback league. You could never shut the door on a quarterback."

Because the Redskins have so many needs, including guard, wide receiver, tight end and linebacker, it's possible they go in another direction in the first round and look to move a later pick for a QB on a rookie contract, such as the Arizona Cardinal's Josh Rosen. N.C. State's Ryan Finley, West Virginia's Will Grier and Auburn's Jarrett Stidham are among options in the second or third rounds.

The past two years, Washington shored up its defensive line with Alabama's Jonathan Allen and Daron Payne. After those players fell to the Redskins, they could be just fine sitting at No. 15 and seeing who drops down the board to them.

"You can't say, 'What's the No. 1 (need)? Because I think the No. 1's going to boil down to who's there when it's time for us to pick that we think is the best football player."

Gruden said it's "just a coincidence" his team has so many Alabama guys, but acknowledged Nick Saban's pipeline is strong.

"Playing in that system, the familiarity they have with each other, the more you can add if they're good enough players and good enough people, we'll take a shot at them," Gruden said.

Gruden added that he "might look more at Clemson this year" after the Tigers beat Alabama to win the national title. In that case, Clemson has cornerback Trayvon Mullen, receiver Hunter Renfrow and guard Mitch Hyatt to choose from.

After losing slot receiver Jamison Crowder to the Jets in free agency, the Redskins could be looking to restock wideout and tight end targets for Keenum and McCoy. Gruden believes 2018 Mr. Irrelevant Trey Quinn can thrive in the slot, is still a believer in 2016 first-rounder Josh Doctson and would like to see what speedster Paul Richardson can do when healthy, but this position bears watching.

Williams said Washington would address the receiver position in the draft. Gruden estimated there are 60-70 good WR targets available.

The departures of Crowder, safety Ha Ha Clinton Dix to Chicago, linebacker Preston Smith to Green Bay and offensive tackle Ty Nsekhe to Buffalo opened some more holes on the Redskins' already imperfect roster. Gruden said they have to make sure they find replacements for those players, and that includes some safety depth even after signing Landon Collins.

Washington has Troy Apke and special teams standout Deshazor Everett there, but Montae Nicholson's uncertain status after a late-season arrest clouds the situation and keeps safety on the radar.

The signing of former Giants and Jaguars offensive lineman Ereck Flowers could be a replacement for Nsekhe at swing tackle, or the Redskins could move the 2015 top-10 pick inside to left guard. Injuries decimated Washington on the offensive line last season, Shawn Lauvao is probably not the answer again after another surgery and two-time Pro Bowl right guard Brandon Scherff is coming off a season-ending torn pectoral muscle.

When asked about making a splash by adding a big-time receiver, Gruden said: "I'd like to add a big-play guard. I'd be just as happy with that."