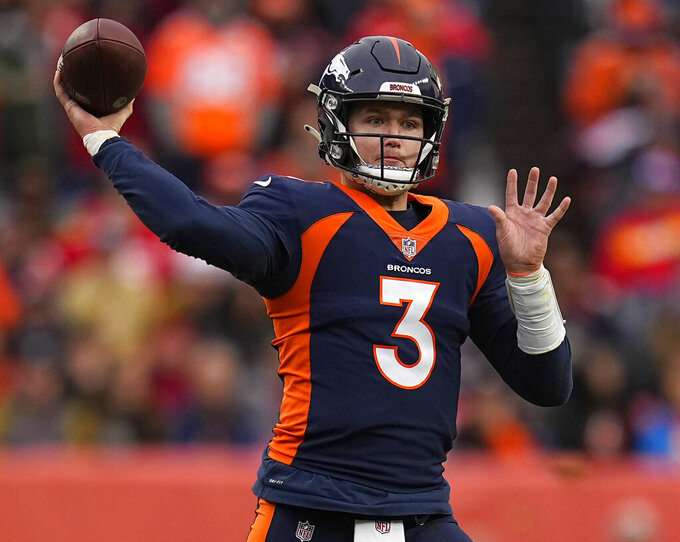 FILE - Denver Broncos quarterback Drew Lock (3) passes against the Kansas City Chiefs during the first half of an NFL football game Jan. 8, 2022, in Denver. Lock says he is relishing the chance to get a fresh start for his career following his trade to the Seattle Seahawks. (AP Photo/Jack Dempsey, File)

RENTON, Wash. (AP) — Drew Lock went into the offseason expecting change and was prepared for a new opportunity somewhere other than Denver.

He became part of one of the biggest trades of the offseason when he was acquired by the Seattle Seahawks in the deal that sent Russell Wilson to the Broncos.

“I was ready for something to happen and then when I found out that this is what happened, I was really, really excited,” Lock said Monday. “Excited for a fresh start. Excited to come in and compete for a starting job.”

For now, Lock appears to be the likely starter going into next season. The only other quarterback on Seattle’s roster is Jacob Eason, although the team has discussed possibly bringing back Geno Smith.

Lock, who is about to begin his fourth season, said nothing has been guaranteed and he’s expecting to face an open competition when Seattle’s offseason program begins.

While that may be the case, Lock’s new bosses have said plenty to lay the groundwork should the Seahawks go with the 25-year-old as their quarterback. Lock has started 21 of 24 career games but has been inconsistent through his first three seasons. He’s shown flashes of great potential along with making head-scratching mistakes.

General manager John Schneider and coach Pete Carroll have both been highly complimentary of Lock.

“We have a ton of faith in Drew. We’re excited about it, we’re excited about a change of scenery for him,” Schneider said. “I know a couple of my buddies were trying to acquire him all last spring and into the fall. He is a guy that, in my opinion, the media has beat down a little bit. We are excited to get him into our culture with our coaching staff, and we will continue to look for guys that will compete with him.”

Seattle had shown interest in Lock when he was coming out of Missouri. Lock recalled meeting with the Seahawks at the NFL combine, although Seattle ended up passing on him in the first round. Denver took Lock with the 10th pick of the second round in 2019.

Lock said he got a feel then for what he’s likely to experience now playing for Carroll.

“It was fun ... you felt (Carroll’s) energy there,” Lock said. “Even as a rookie. You’re not even on their team and you feel the energy and it feels like a place you want to go play.”

Lock also understands the situation he’s stepping into as the potential replacement for Wilson following all the success he had during his 10 seasons with the Seahawks. To that point, Lock selected No. 2 for his jersey number with the Seahawks after wearing the No. 3 in college at Missouri and with the Broncos.

Lock said that’s a nod to respecting what Wilson accomplished in Seattle.

Running back Rashaad Penny also spoke Monday after signing a one-year deal worth up to $6.5 million to return to the Seahawks. Penny is coming off the best season of his career, and was the most productive running back in the league over the final month of the season.

He said he gave his agents guidelines for what he wanted in free agency, but his preference was a return to Seattle.

“This just felt like home. I was more comfortable here,” Penny said. “I think I got in a rhythm and a groove with the guys in the offense. So it was like a no-brainer for me to know where to come back to.”