Drops by 49ers receivers contribute to bad day for Garoppolo 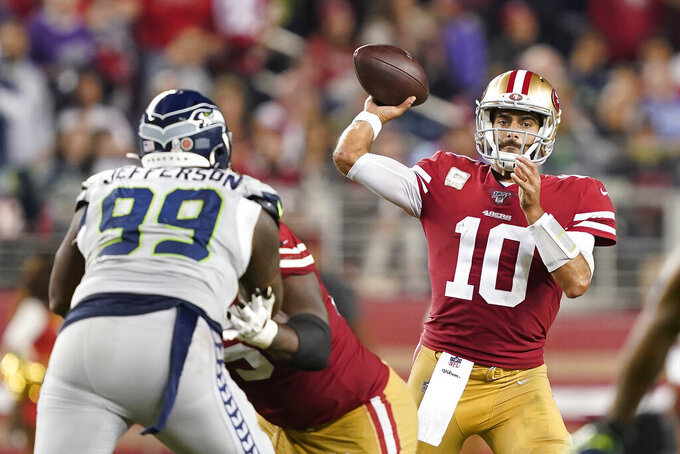 SANTA CLARA, Calif. (AP) — Jimmy Garoppolo followed up his best game of the season with his worst.

While he made some questionable decisions, had some poor throws and committed three turnovers, Garoppolo didn't get much help at all from the San Francisco receivers, who dropped six passes, leading to the 49ers first loss of the season.

Garoppolo went 24 for 46 for 248 yards with one touchdown, one interception, five sacks and two lost fumbles in a 27-24 overtime loss to Seattle on Monday night. He set a career low with only 5.4 yards per attempt and had his lowest completion rate (52.2 percent) and second-lowest passer rating (66.2) of the season.

That performance comes after a near-perfect game the previous week against Arizona when he threw for 317 yards and four TDs with no turnovers in a 28-25 win for the 49ers (8-1).

Those numbers against Seattle wouldn't have been quite as bad if not for a case of the dropsies from his receivers.

"Whenever there's drops, it takes a guy throwing the ball and catching the ball," Garoppolo said Wednesday. "Obviously, I could throw it better to make it easier on those guys. Those guys work their (butt) off, they really do. They come in everyday with a good mindset, and it's just when your number gets called, you've got to take advantage of the opportunities. In this league, we all know, you don't get many of them. When you do, you've just got to take advantage of it."

The six dropped passes were tied for the most by a team in a single game this season, according to SportRadar. The Niners had done a good job holding onto the ball for most of this season with just three drops total the previous three weeks and only nine all season before last week, tied for third fewest in the league.

Some of the drops came in key moments that changed the outcome of the game. In the third quarter, a high pass went off Kendrick Bourne's hands and right to Quandre Diggs, who returned the interception 44 yards to the 16. That set up a TD pass by Russell Wilson that gave Seattle its first lead of the game.

Bourne had another crucial drop on a third-down pass in the red zone in the fourth quarter, forcing San Francisco to settle for a game-tying field goal rather than have a chance to go in for a go-ahead touchdown.

"I am just down on myself because those type of things can’t happen," Bourne said. "It is just about focusing in on the ball, because I know I can catch the ball, it is not hard. Sometimes you just squeeze it harder than other situations. When I am wide open I tend to get more relaxed than when someone is on me."

Then on the Niners’ final drive of overtime, Dante Pettis had his second dropped pass of the game on a second-down play. That prevented the 49ers from being able to gain yards to create a more manageable third down and run time off the clock.

When Garoppolo underthrew Deebo Samuel on the next play, leading to a breakup by Shaquill Griffin, San Francisco used up only 14 seconds on the drive, leaving Wilson more than enough time to drive the Seahawks to the winning field goal.

Samuel and Kyle Juszczyk also had drops in the game for San Francisco.

Receiver Marquise Goodwin said even the most accomplished receivers such as Jerry Rice, dealt with drops and the key is how you respond after them.

"Drops happen," Goodwin said. "The greatest to ever play the game, they were hating on him when he first got here saying he dropped the ball. It happens. Just have your mindset on focusing on the next play, not the last play whether it was a good or bad play doesn't matter. You just have to focus on making them."