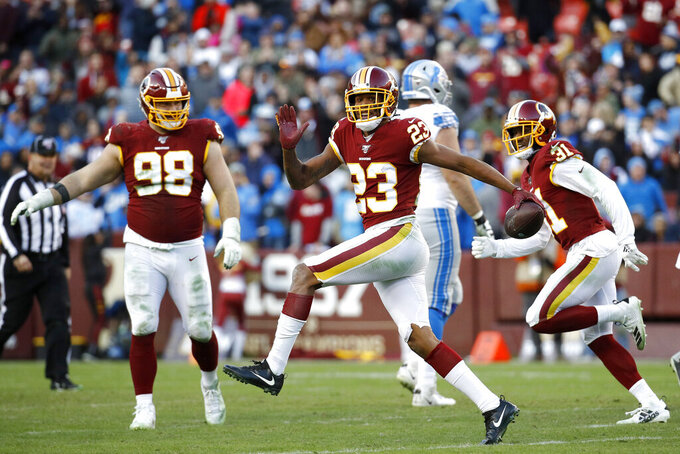 FILE - In this Nov. 24, 2019, file photo, Washington Redskins cornerback Quinton Dunbar (23) reacts after intercepting a pass from Detroit Lions quarterback Jeff Driskel during the second half of an NFL football game in Landover, Md. Dunbar got his wish when he asked out of Washington and got traded to Seattle during the offseason. Now he has a chance to learn the Seahawks system and potentially land himself a big pay day next year. (AP Photo/Patrick Semansky, File)

RENTON, Wash. (AP) — Quinton Dunbar spent Thursday morning on a video conference talking about what he could add to the Seattle Seahawks defense after arriving via a trade in March.

His status in Seattle may have changed drastically just hours later when an arrest warrant was issued for Dunbar in South Florida on four counts of armed robbery with a firearm.

According to Miramar, Florida police, multiple witnesses accused Dunbar and New York Giants DeAndre Baker of an armed robbery at a party.

Miramar police issued arrest warrants for both men Thursday on four counts each of armed robbery with a firearm. Baker faces an additional four counts of aggravated assault with a firearm. The residential community is located between Fort Lauderdale and Miami.

Baker, 22, and Dunbar, 27, were attending a cookout at a Miramar home Wednesday night when a fight broke out, and Baker pulled out a handgun, the warrant said. Baker, Dunbar and two other men began robbing other people at the party of thousands of dollars in cash, watches and other valuables, witnesses told investigators.

The announcement of the charges was a drastic change from earlier Thursday when Dunbar spoke of his eagerness about coming to Seattle and the opportunity ahead. Dunbar was traded to the Seahawks after a contract dispute with the Redskins.

“You just want to feel wanted at the end of the day. ... I just hope to repay them with the way I carry myself as a person,” Dunbar said on the video conference.

Dunbar said he was excited to be part of a defense that had produced standout cornerbacks like Richard Sherman in the past.

“When I first heard about the trade I was excited,” Dunbar said. “I mean, better fit. Better coaching, they are a winning culture — obviously been winning for a while. I feel like their defense is who I am. … Growing up watching (Richard) Sherman and (Brandon) Browner and those types of guys. You know, that’s who I tried to model my game after once I made the transition. So it was a perfect fit for me.”

Whether that fit has a long-term future is the question. The Seahawks issued a statement later Thursday saying, “We are aware of the situation involving Quinton Dunbar and still gathering information. We will defer all further comment to league investigators and local authorities.”

Rather than address its cornerback needs through free agency or the draft, the Seahawks landed one of the top young cornerbacks in the league through a trade in March. Seattle sent a fifth-round draft pick to the Redskins to get Dunbar, who was coming off the best season of his young career.

At 6-foot-2 with long arms, Dunbar fits the mold of the cornerbacks Seattle likes to have in its defensive system. Dunbar had a career-best four interceptions last season for the Redskins. He has started 17 of the past 18 games he’s played for Washington, but missed five games last season with a hamstring injury.

Dunbar was expected to compete with Tre Flowers for the starting cornerback job opposite Shaquill Griffin in Seattle’s secondary. Dunbar's contract is set to expire after the upcoming season.