Edelman confident in all of Tom Brady's potential successors 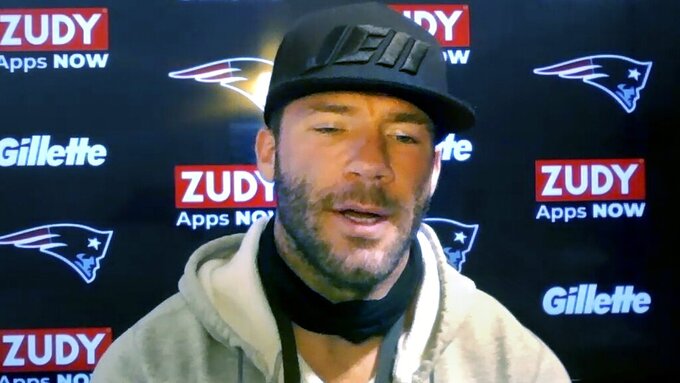 BOSTON (AP) — In some ways, the chemistry between Tom Brady and Julian Edelman was as key to the Patriots' success in recent years as the X’s and O’s.

Brady’s departure this offseason certainly created a void, but not one that Edelman wants to dwell on.

“We played a lot of ball together. I love him to death, but the train keeps moving,” Edelman said Monday. “As it will when I’m not playing here someday. It just always keeps going. So we’ve got to worry about the people that we have here and try to prepare ourselves the best we can with the situation we’re in with everything we’re dealing with.”

One of the people that could help ease the transition away from Brady is the arrival of Cam Newton, whom Edelman was able to get a sneak peek at recently when the two got together for an impromptu throwing session shortly before reporting to training camp.

“He’s a specimen, for sure,” Edelman said. “When you first meet him, just his stature. The dude is large, put together well. And he’s got a great energy about himself. I was really impressed with his work ethic and his mindset.”

But Edelman was also quick to point out those same attributes could be applied to potential Brady successors Jarrett Stidham and Brian Hoyer as well.

He said the offense is safe in any of their hands.

“(Hoyer’s) been in the system. You’ve got Stidham, who’s got a year under his belt and you got Cam, who this guy’s a heck of a football player,” Edelman said. “This isn’t his first year playing football. This guy’s a former MVP, he’s played in a lot of big games. So I’ve got a lot of faith in our coaching staff ... to try to prepare everyone to the best we can.”

Whoever does eventually take Brady’s spot will almost certainly be looking toward Edelman at some point for advice.

Not just because he enters his 11th season as New England’s most productive returning receiver, but because Edelman is also the longest-tenured offensive player on the roster.

Though, because of the adjustments that will be made to the offense post-Brady, Edelman said he expects to be a student as much as a teacher.

“You know, every year there’s always something new,” he said. “I think if I go out and try to lead by example, how to prepare myself with taking care of my body and myself mentally for the day, taking things from the classroom to the walk-through or eventually the practice and just trying to be a professional. That’s the best I can do."

He said finding a way to juggle football with the ongoing coronavirus pandemic will have to be approached as a team.

“That’s what this season’s going to be about, not just in overcoming certain situations that everyone’s having to deal with,” Edelman said. “I think we got a long road ahead of us. But if we just keep on bringing our hardhat and lunch pail to work and coming in here with a purpose, it’s usually when good things happen. So that’s what I’m trying to do."

Off the field, Edelman said that he has spoken with DeSean Jackson since he condemned the Eagles receiver over Jackson’s anti-Semitic social media posts last month.

Edelman, who is Jewish, offered to accompany Jackson to the United States Holocaust Memorial Museum in Washington, D.C., and promised to attend the National Museum of African-American History and Culture with Jackson in return.

“I wanted to take a stance to try to help him get through what he had to get through, because we’ve all had some sort of down or some kind of adverse situation that we’ve had to deal with,” Edelman said. “I just wanted to go out and do what I could to not only show that I support my community but also show that I’m here to help people in our league as well."

He said the meeting with Jackson will hopefully happen in the offseason when some of the pandemic restrictions allow for it.

“Right now my mind’s at football,” Edelman said. “That was then and those are very important issues. But right now, I’ve got a training camp mindset and my focus is on trying to prepare myself mentally, physically and emotionally for the upcoming year.”