Even with Murray drama, Cards confident in team's direction 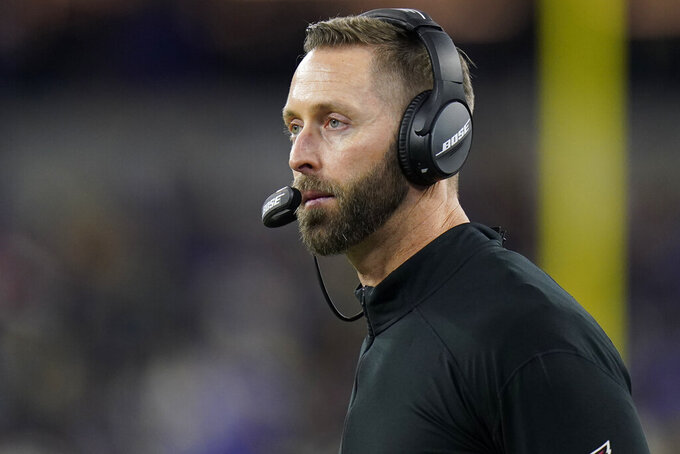 FILE - Arizona Cardinals head coach Kliff Kingsbury watches during the first half of an NFL wild-card playoff football game against the Los Angeles Rams in Inglewood, Calif., Jan. 17, 2022. The Arizona Cardinals appeared to be one of the more stable franchises in the NFL just six months ago. That changed a little after a late-season collapse and a passive-aggressive contract spat between quarterback Kyler Murray and the team’s front office brought some drama to the desert. (AP Photo/Jae C. Hong, File)

Well, that's the current plan, even if recent events have clouded the picture a little.

The Cardinals appeared to be one of the more stable franchises in the NFL just six months ago, but a late-season collapse and a passive/aggressive contract spat between Murray and the team's front office have brought some drama to the desert.

General manager Steve Keim tried to defuse some of that tension a week before the draft, saying there was “zero chance” that the Cardinals will trade Murray and start a rebuild. Keim added he's been in contact with Murray about the team's draft plans and believes the contract situation will be resolved this summer.

“Nothing has changed as far as him being our long-term and short-term quarterback," Keim said.

Keim, who has been with the Cardinals since 1999 and the GM since 2013, is well aware of what a good quarterback means for a roster.

“I was a decent GM when Carson Palmer was our quarterback. When he retired, I wasn't very good,” Keim said. “I am smart enough to know that Kyler Murray makes me a better GM. We took him with the first overall pick, we love him, the guy continues to improve, he's made us a better football team, so we're excited about his future.”

Assuming Murray and the Cardinals figure out things, the upcoming draft is a way to plug some holes on the roster. The Cardinals don't have any glaring needs but could certainly use help at multiple positions, including edge rusher, defensive line, receiver or cornerback.

That should give Arizona considerable freedom to select the best player that drops to No. 23. Players who could be available at that spot include Georgia defensive linemen Jordan Davis and Devonte Wyatt, Arkansas receiver Traylon Burks, and Clemson cornerback Andrew Booth Jr.

There are certainly reasons to believe the Murray-Kingsbury offensive marriage can still work.

Outside of the most recent late-season collapse, the Cardinals have been moving in an upward trajectory the last few seasons. They were 5-10-1 during Murray's rookie season and then improved to 8-8 in 2020. They finished with an 11-6 mark in 2021 before losing in the wild-card round to the eventual Super Bowl champion Los Angeles Rams.

It's no coincidence that the Cardinals started having problems right about the time three-time All-Pro receiver DeAndre Hopkins started getting hurt.

Hopkins missed most of the last half of the season, including three games because of a hamstring injury and four more because of a knee injury. Everyone knew Hopkins was important for the offense but the Cardinals didn't even look like the same team without him on the field.

The Cardinals were 3-5 without Hopkins, including their playoff loss.

“We’ve got to continue to evolve, there’s no doubt,” Kingsbury said. “When we lost Hop, I didn’t do a great job adjusting things. That was a learning lesson for all of us.”

With that in mind, the Cardinals could seek a receiver in the first round, especially after losing Christian Kirk to the Jacksonville Jaguars in the offseason.

James Conner was one of the Cardinals' best players last season, being selected to his second career Pro Bowl after running 752 yards and scoring a career-high 15 touchdowns on the ground.

Conner formed a productive duo with Chase Edmonds last season, but Edmonds left for the Miami Dolphins in free agency.

The Cardinals have a few internal candidates to fill Edmonds' role this season, including third-year back Eno Benjamin, but they could also look for help in the draft.

The upcoming season could be make or break for young linebackers Isaiah Simmons and Zaven Collins.

Simmons and Collins were the Cardinals' back-to-back first-round picks in 2020 and 2021, but have had mixed results on the field.

Simmons, No. 8 overall in 2020, didn't play that much during his rookie season before starting all 17 games last season and finishing with 105 total tackles. Collins was the No. 16 overall selection a year ago but his playing time fluctuated and he finished with just 25 tackles.

Both players have legitimate NFL talent, but it remains to be seen whether they become the defensive cornerstones the Cardinals thought they were adding.