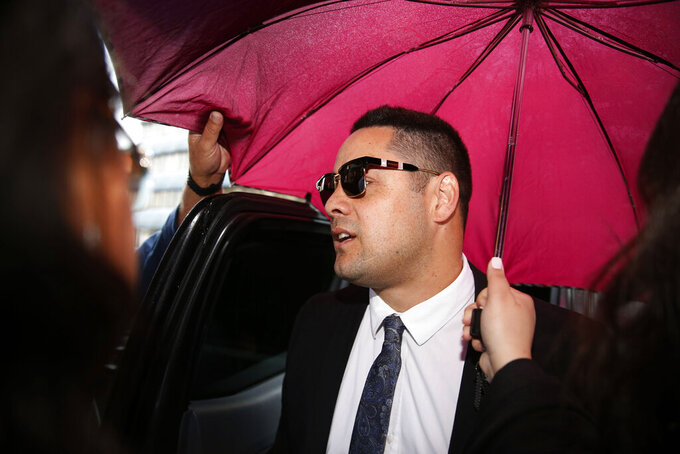 Former football player Jarryd Hayne arrives at court in Newcastle, Australia, Thursday, May 6, 2021. Hayne, a rugby league star who also played in the NFL for the San Francisco 49ers, has been sentenced to at least three years and eight months in jail for the sexual assault of a woman in 2018. (Darren Pateman/AAP Image via AP)

SYDNEY (AP) — Jarryd Hayne, a rugby league star who also played briefly in the NFL for the San Francisco 49ers, has been sentenced to at least three years and eight months in jail for the sexual assault of a woman in 2018.

Hayne was found guilty in March of two counts of sexual assault.

A judge ruled on Thursday that Hayne should be jailed for five years, nine months with a non-parole period of three years and eight months. After the sentencing was announced, Hayne was taken away by corrective services officials.

The 33-year-old Hayne had denied assaulting the woman in the bedroom of her home in Newcastle, north of Sydney, in September 2018. Court testimony said Hayne had a taxi waiting out front of the woman's home while he was with her.

In handing down the sentence, District Court Judge Helen Syme said she found that Hayne was fully aware that the victim was not consenting and that he proceeded anyway.

“The reliability and honesty of the victim’s evidence was tested at length and in my view, her reliability was not in doubt. She said no several times,” Syme said. “The use of force was such that the victim had no prospect of stopping him physically. He was at least twice her weight at 100 kilograms (220 pounds) and an athlete at the top of his form. The offender was fully aware the victim was not consenting."

The 28-year-old woman said in a victim impact statement that she was plagued by constant flashbacks of seeing Hayne’s face during the sexual assault, adding that he destroyed her life and she would never be the same again.

“You don’t owe somebody your body, nor should they expect it,” the woman said. “My body remembers and my mind won’t let me forget. This assault has changed me. It changed my direction and who I was. I don’t remember the last time I had a proper sleep.”

Hayne left the NRL and spent a season with the San Francisco 49ers in the NFL before returning to rugby league via a brief stint with Fiji’s rugby sevens squad in 2016. He has not played in the NRL since his contract with Parramatta expired in 2018.

From his time with the 49ers in 2015, Hayne was involved in a rape-related incident in December 2015. He later settled a civil case in which it was alleged he had assaulted a woman in California.

The case was dropped after the parties reached a “mutually agreeable settlement.” The woman launched civil action after authorities failed to gather enough evidence to proceed with criminal charges.

The woman’s attorney said “the parties reached a mutually agreeable settlement” but that the terms were private. Hayne at the time said he “unequivocally and vehemently denies the allegations."