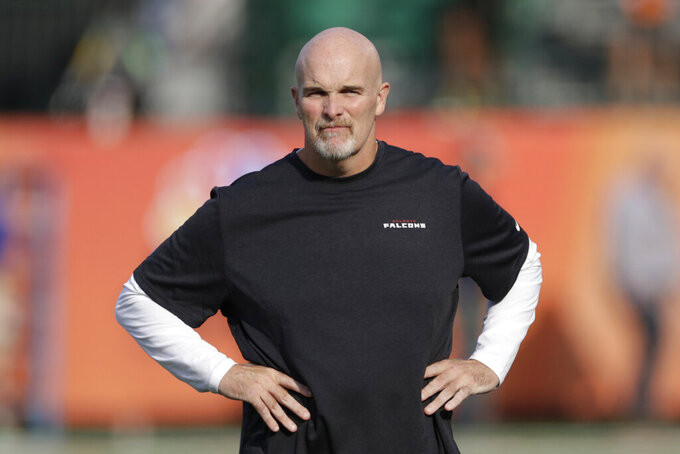 FILE - In this Aug. 1, 2019, file photo, Atlanta Falcons head coach Dan Quinn watches before the Pro Football Hall of Fame NFL preseason game between the Falcons and the Denver Broncos in Canton, Ohio. Quinn has gone back to his past to protect his future with the Atlanta Falcons. Quinn fired his three coordinators following a disappointing 7-9 finish in 2018. He appointed himself as the new defensive coordinator, the role he held in Seattle before being hired by Atlanta in 2015. (AP Photo/Ron Schwane, File)

Fantasy Players To Watch: Freeman missed 14 games in 2018 but when healthy can post big fantasy numbers. He topped 1,000 yards rushing in 2015 and 2016 but overlooked fantasy key is combined 127 catches those two years. Despite 71 catches, first Pro Bowl honor in 2018, Hooper still going late in drafts, so could be bargain. Ridley's 10 TD catches may be difficult to repeat but big-play talent is legitimate.

Expectations: After firing all three coordinators, Quinn is under pressure to take Falcons back to playoffs. Team owner Arthur Blank has spent big to retain Ryan, DT Grady Jarrett, Freeman and Jones, among others. 2016 Super Bowl season and return to playoffs following season made 2018 especially disappointing. Ryan is 34 and still performing at peak.