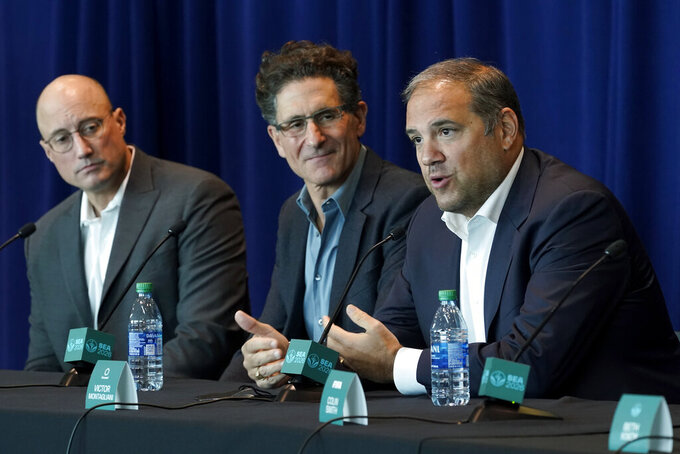 Victor Montagliani, right, CONCACAF president and FIFA vice president, speaks Monday, Nov. 1, 2021, in Seattle as Adrian Hanauer, center, owner of the MLS soccer Seattle Sounders, and Kasey Keller, left, former goalkeeper for the Sounders and the U.S. Men's National Team, look on during a news conference at Lumen Field. Montagliani was discussing taking part in an official visit of a FIFA delegation to Seattle, as organizers try to be selected as a host city for the FIFA World Cup in 2026. (AP Photo/Ted S. Warren)

SEATTLE (AP) — FIFA and CONCACAF are inching closer to making the final call on which cities in the U.S., Canada and Mexico will host matches for the 2026 World Cup, with decisions expected sometime next spring.

The FIFA and CONCACAF delegation wrapped up its second set of site visits Monday in Seattle, which is seen as one of the strongest candidates for hosting matches due to its soccer history, favorable summertime weather and as the sole city in the Pacific Northwest to bid.

FIFA chief tournaments and events officer Colin Smith said all site visits should be completed by the end of November, with a decision expected sometime toward the end of March or early April.

“Certainly the decision is getting harder and harder with every stop, which I guess is a good problem to have,” Smith said.

The 2026 World Cup will be the first with 48 teams but it also presents a logistical challenge with the largest geographic footprint of any World Cup to date. Games could be played from Edmonton, Alberta, to Mexico City and Seattle to Boston. Smith said they’re currently thinking 16 cities will be selected as hosts, but that is not set.

Another series of visits is coming up this month to Mexico City, Guadalajara, Mexico, Los Angeles, Edmonton and Toronto.

“Ultimately, it’s a bit of a jigsaw puzzle of all these different areas,” Smith said. “To break down the magic of a World Cup is obviously incredibly difficult so the only way to do it is really to look at all the constituent groups.”

One of the big questions facing Seattle and some other bid cities will be what to do about their stadiums with synthetic fields. FIFA requires grass surfaces for the World Cup.

Seattle doesn’t seem likely to replace the synthetic field used by the NFL's Seattle Seahawks and Seattle Sounders of MLS at Lumen Field and had mixed results in the past with temporary grass surfaces. Most recently, Seattle used a temporary grass surface for the 2016 Copa America with great success, in part because it was set in place and used for several weeks.

“FIFA is looking at a lot of NFL stadiums. Most of them have synthetic,” Seattle Sounders owner and Seattle 2026 bid chair Adrian Hanauer said. “So in my mind this is not the most critical piece to the bid.”