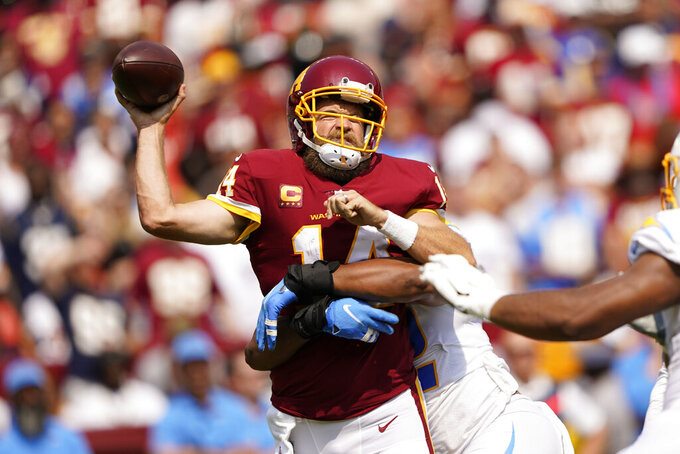 LANDOVER, Md. (AP) — Ryan Fitzpatrick waved to the crowd as he hobbled off the field, and the cheers of appreciation soon turned to boisterous chants of “Heinicke! Heinicke!”

Fitzpatrick injured his right hip midway through the second quarter of his Washington debut, and surprise playoff star Taylor Heinicke came on in relief. Even though Washington lost 20-16 to the Los Angeles Chargers on Sunday, the starting quarterback job could now belong to Heinicke after the fan favorite completed 11 of 15 passes for 122 yards and an 11-yard touchdown pass to Logan Thomas.

"I’m always excited — it’s just unfortunate that it happened due to an injury," Heinicke said. “Biggest thing is going out there with some confidence. I go out there and try and play freely.”

Heinicke showed off some of the improvisational skills that helped Washington put a scare into Tom Brady and the eventual Super Bowl champion Tampa Bay Buccaneers in the wild-card round last season. Even if he's not a prototypical pocket passer, a perfect throw along the sideline to Terry McLaurin for a 37-yard gain, three scrambles and some other Houdini acts only did more to endear Heinicke to his teammates and fans back at FedEx Field in large numbers for the first time since 2019.

“We knew this Taylor Heinicke guy’s a really good player,” Chargers coach Brandon Staley said. “All you’ve got to do is watch the Tampa playoff game, and all you got to do really is listen to the crowd when he came in the game. They have a lot of belief in this player, and there’s good reason for it.”

Washington coach Ron Rivera did not have an update on Fitzpatrick after the game and hopes to know more about the 38-year-old's status Monday. Players who saw Fitzpatrick said he was in good spirits.

“He gave it us (his) all every day,” said Thomas, who had been developing chemistry with Fitzpatrick throughout training camp. “Leader of our team, and obviously he’ll be missed.”

This was supposed to be the latest stop on the FitzMagic tour, the ninth team Fitzpatrick has started for in his 17-year NFL career. But he made it only a quarter and a half before the hit from L.A. edge rusher Uchenna Nwosu while letting go of the ball.

Fitzpatrick was 3 of 6 for 16 yards before getting hurt.

Still, Washington players and fans are plenty familiar with Heinicke, who was signed to be Washington's “quarantine quarterback” last season while he was taking college classes online and tried to gut out a shoulder injury in the playoffs.

Rivera said Heinicke's ability to improvise is what sparked the offense against the Chargers. If Heinicke starts Thursday night against the New York Giants, players expect more of the same.

"We’ve got supreme confidence in him as well," Thomas said. "Business as usual. We’ve been in this situation before. Taylor is a little bit more mobile than Fitz is. Same old story just like last year. ...

“Keep your head on a swivel, to be honest with you, because you never know what’s going to break down and what he sees.”