Game-wrecking T.J. Watt worth every dollar for Steelers 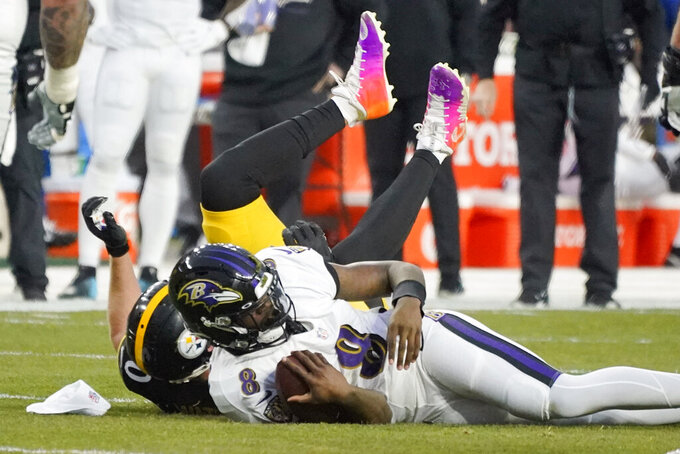 Pittsburgh Steelers outside linebacker T.J. Watt (90) rolls behind Baltimore Ravens quarterback Lamar Jackson (8) after he was tackled during the first half of an NFL football game, Sunday, Dec. 5, 2021, in Pittsburgh. (AP Photo/Gene J. Puskar)

PITTSBURGH (AP) — The metrics are easy. When T.J. Watt plays, the Pittsburgh Steelers are playoff contenders.

When he doesn't, they're in trouble. A lot of trouble.

Three months after signing one of the richest contracts given to a defender in NFL history, the perennial All-Pro outside linebacker somehow seems underpaid.

Stacking up 16 sacks — including 3 1/2 during Sunday's heart-stopping 20-19 win over Baltimore that gave Pittsburgh's scattershot season a much-needed jolt — will do that.

Imagine if he'd been healthy all year. Watt left two games because of injuries and sat out two others. The fact the Steelers are 0-3-1 in those games is not a coincidence. They are 6-2 when Watt's No. 90 is in full flight coming off the edge, bringing a unique brand of chaos that galvanizes a defense that's ordinary — or worse — when he's standing on the sideline in sweatpants or watching at home from his couch.

Watt didn't even practice last week after being placed into the COVID-19 protocol just 24 hours after a blowout loss to Cincinnati. He tuned into meetings virtually and attempted to stay game-ready by throwing on a pair of cleats and churning up the turf around the trees in his yard.

Time and again Watt found a way to succeed where so many others have failed, including disrupting Jackson's timing just enough to force a slightly errant pass on a 2-point conversion attempt with 12 seconds to go that swung the outcome of the game.

If Watt isn't there, Jackson flips to a wide-open Mark Andrews for a score that likely would have all but ended Pittsburgh's chances in the AFC North.

Only Watt was there, extending all 6 feet 4 inches of his frame in an effort to disrupt Jackson, whose sidearm throw glanced off Andrews' hands and fell harmlessly to the Heinz Field turf.

“T.J. Watt, he’s a great defender, great rusher,” Jackson said. “He was doing his thing out there tonight.”

And doing it at a level rarely seen in NFL history. Watt has already tied James Harrison's franchise record for sacks in a season and is on pace to break Michael Strahan's single-season NFL record (22 1/2), remarkable considering Watt has basically missed the equivalent of three full games because of groin, hip and knee injuries and spent last week tearing up his yard while in the COVID-19 protocol.

“He’s unique,” Steelers coach Mike Tomlin said. “He is unique and a collection of unique people. But you know, his production, his output is unique. And so, you know, we shouldn’t be surprised that his method or his process is unique. His level of effort, his attention to detail, his intensity. All are unique.”

“He’s a game-wrecker,” Steelers safety Minkah Fitzpatrick said. "He’s a guy that’s going to go out there and cause havoc. Just the energy that he plays with, the passion he plays with. I wouldn’t call it the anger, but when he’s out there, he’s angry.”

It's an award Watt's older brother J.J. captured three times while anchoring the Houston Texans' defensive line last decade. It's an award the Steelers expected Watt to contend for after signing him to that massive extension in early September.

Watt vowed the pressure that comes with all those zeroes on his contract would not change his approach. If anything, it's only amplified it. Good thing. Any chance the Steelers have of reaching the postseason largely depends on Watt providing the juice for a team in desperate need of electricity.

The offense found a rhythm in the second half against the Ravens by mixing in a fair amount of no-huddle, an approach that gives quarterback Ben Roethlisberger more flexibility in calling the plays. Yet Roethlisberger made it a point to praise first-year offensive coordinator Matt Canada after a 29-yard touchdown throw to Diontae Johnson, pointing to the box where Canada was sitting as a sign of respect.

While Johnson is flourishing, the group behind him on the depth chart — Chase Claypool, James Washington and Ray Ray McCloud — have been a mixed bag at best. At the moment, there's a case to be made that all three rank below Johnson, running back Najee Harris and tight end Pat Freiermuth in Roethlisberger's pecking order of preferred targets.

The practice squad guys. The Steelers have been forced to rely heavily on players such as defensive tackle Montravius Adams — signed away from Seattle last week — and guard John Leglue, who played the first regular-season snaps of his career after B.J. Finney went down in the first quarter with a back injury.

A rare off day for kicker Chris Boswell nearly cost the Steelers. He missed an extra point early in the fourth quarter that would have tied the game and later booted a kickoff out of bounds to give the Ravens excellent field position trailing 20-13 with 1:48 to play.

Finney is likely unavailable to play Minnesota on Thursday. Defensive back Joe Haden's slow recovery from a sprained foot makes his status uncertain. The team did receive a bit of good news on Monday when it activated inside linebacker Robert Spillane off injured reserve.

39 — the number of fourth-quarter comebacks engineered by Roethlisberger during his 18-year career. Only Peyton Manning (43) and Tom Brady (41) have more.

Hope the momentum continues on Thursday night in the team's first visit to Minnesota (5-7) since 2005.