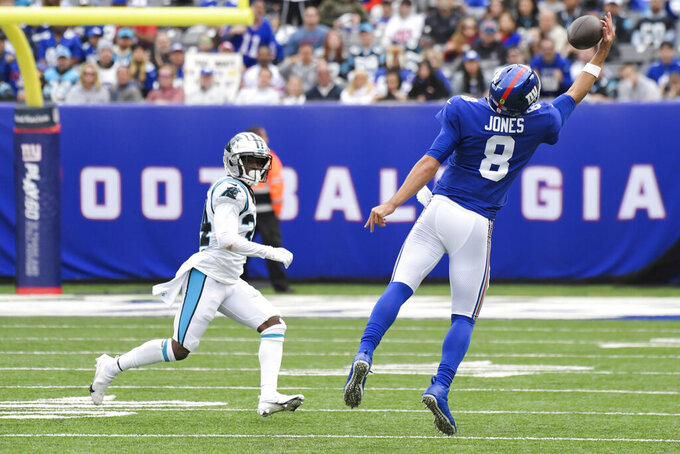 EAST RUTHERFORD, N.J. (AP) — A couple of days before the New York Giants play, Daniel Jones and offensive coordinator Jason Garrett grab the list of plays for the upcoming game and go through the call sheet.

It's a meeting that lets the quarterback tell Garrett what plays make him comfortable and what don't.

“I let him know based on the week of practice, based on film study, obviously, what you like going into the game,” Jones said Tuesday, a day before the Giants (3-6) headed into their bye week.

New York has eight games left in the new 17-game regular season, and making the playoffs for the first time since 2016 seems iffy, and all of the Giants, not just Jones, need to reach a comfort level.

There is a bit of hope. Believe it or not, the Giants are 1 1/2 games out of a wild-card spot in the NFC, where most of the team have sub-.500 records.

The defense, which was supposed to carry New York this season, has found its groove, giving up 39 points in winning two of the last three games after having major struggles. The offense is the weak link. The line lost left guard Shane Lemieux to a knee injury after one game, center Nick Gates to a broken leg in the second. Left tackle Andrew Thomas, the best lineman, has missed four games with foot and ankle injuries.

The skill players have been hit harder. Jones has only had star running back Saquon Barkley, receivers Kenny Golladay, Sterling Shepard, Kadarius Toney and Darius Slayton and tight end Evan Engram for one game — a loss to Atlanta.

Barkley, who had ACL surgery early last season, has missed four games with an ankle injury. Golladay, who signed a $72 million contract, Shepard and Slayton each have missed three games. Engram missed the first two and Toney, the exciting first-round draft pick, has missed one game and was lost on the opening series of a second.

The rash of injuries has altered those Friday meetings for Jones and Garrett. Some of their discussion is about throwing passes to John Ross, Collin Johnson, Dante Pettis and CJ Board, with the latter two now on injured reserve. Instead of Barkley, the handoffs are going to Devontae Booker and Eli Penny.

The playmakers general manager Dave Gettleman added in the offseason or were in place haven't been making as many plays as expected. Golladay and Toney have not scored a touchdown. Barkley and Booker share the team lead with three touchdowns each: two running, one receiving.

A positive is that everybody is almost ready to return. The biggest question mark is Shepard with a quad injury.

“There’s been flashes of the offense in the previous weeks with everybody healthy – Washington, Saints, all those guys make a play,” said Engram, who has caught touchdown passes the last two games. “I know those guys are working to get back and we definitely are going to be explosive, and try to work and continue to grow and make plays all together.”

The Giants are hoping having all the skill players available will open up things.

“Ideally, you want your playmakers on the field,” veteran safety Logan Ryan said. “It gives us the best chance to win when your star players are on the field, and that’s what they get paid to do. That will give us a better chance to win, without a doubt.”

While saying that, Ryan noted Jones and the backups have been finding way to compete. He also said it has forced the defense to play better.

“We took that upon ourselves in the darkest times to each step up and play a lot better, and I think we’ve done that,” he said.

Still, the return of the skill players is not a cure-all. The O-line has been adjusting on the fly with all the injuries. Jones has been running and dodging pressure much of the season. If he does not have time to throw or the team can't come up with a way to increase his throwing time or get the running game going, all the talent back on the field is not going to help the Giants avoid a fifth straight losing season.

“In this sport at the end of the day, we’re at full power with everybody, but only time will tell what will happen in the future,” Toney said. “We can’t predict nobody else’s future.”