Giants leading tackler Blake Martinez out for year with ACL 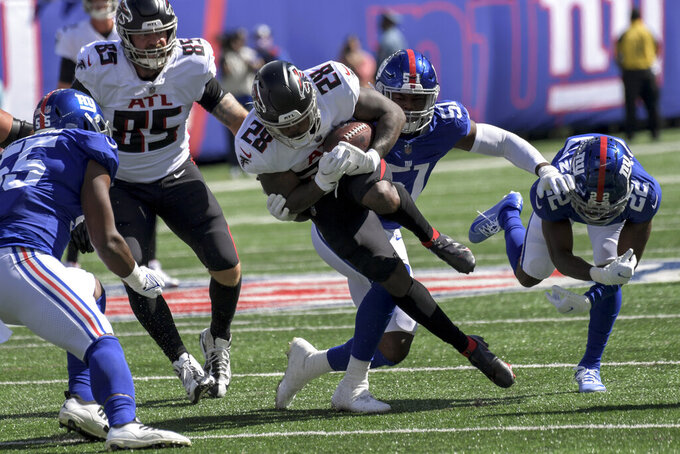 EAST RUTHERFORD, N.J. (AP) — New York Giants leading tackler Blake Martinez is going to miss the rest of the season with a torn ACL in his left leg.

He was injured on the opening series of the Giants' 17-14 loss to the Atlanta Falcons on Sunday and had to be helped off the field. Coach Joe Judge confirmed the injury happened without contact as the inside linebacker chased running back Cordarrelle Patterson on an short pass.

Martinez is the second Giants captain lost to an injury this season. Offensive lineman Nick Gates broke his left leg on Sept. 16 against Washington.

Martinez joined the Giants as a free agent last season and led the team with with 151 tackles, third best in the league.

With Martinez out, second-year pro Tae Crowder took the play calls from the bench in the game. Reggie Ragland took Martinez's spot and played a season-high 40 snaps.

Judge had no update on the status of receivers Sterling Shepard and Darius Slayton, who left the game in the first half with hamstring injuries.

C.J. Board and Collin Johnson got a lot of playing time with Shepard and Slayton out. Judge said John Ross, who was signed as a free agent in the offseason, might come off injured reserve this week. Linebacker Elerson Smith, a fourth-round draft pick, also might be activated.

NOTES: Judge has no intention of taking away the play-calling duties from either offensive coordinator Jason Garrett or defensive coordinator Pat Graham. He said the team will continue to correct mistakes before making radical changes. ... TE Evan Engram felt he handled the fans' criticism well on Sunday. He was booed after a late first-half fumble and cheered in the third quarter leaving the field. “I'm focused on playing for my team and my teammates." He called the fans reaction “not ideal.” ... Rookie linebacker Azeez Ojulari now has three sacks in three games.