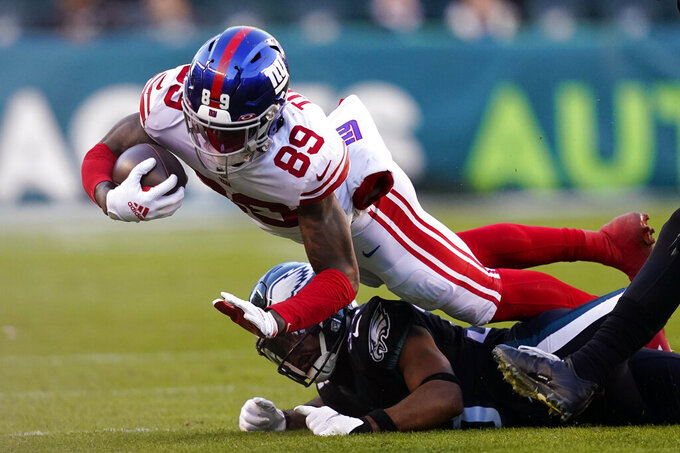 EAST RUTHERFORD, N.J. (AP) — New York Giants first-round draft pick Kadarius Toney is probably going to head back home after the season ends this weekend and do his best to forget about his rookie year.

The 20th pick overall, Toney didn't have a bad season statistically in comparison to the rest of New York's underachieving receiving corps. His 39 catches for 420 yards rank second among Giants receivers in each category.

Toney's problem was staying on the field. The exciting Florida product on Friday was ruled out of Sunday's regular-season finale against Washington with a shoulder injury. He'll finish the having played in 10 of 17 games.

Toney dealt with COVID-19 before training camp and late in the season. He also has had hamstring, ankle, thumb, quad and oblique issues, which have limited both his practices and games.

Earlier this week, coach Joe Judge said the problem many NFL rookies have is the season is longer and there are fewer breaks than in college. They need to learn how to manage their bodies and use the offseason to build muscle.

“In terms of Kadarius, he’s had a number of injuries,” Judge said. “I wouldn’t say there’s been anything that’s been (big). They’ve all been legit injuries. There’s nothing that he’s stayed off the field for for an extended amount of time that he couldn’t play through.”

When he was healthy, Toney was a playmaker. His best game was against Dallas on Oct. 10 when he caught 10 passes for 189 yards and faked a couple of Cowboys defensive backs out of their cleats.

The end of the season was disappointing. He pulled an oblique against Tampa Bay on Nov. 22 and only played once the rest of the season, against Philadelphia on Dec. 26. That's when he picked up the shoulder injury that Judge says is not serious. He also missed the rematch against Dallas because he was on the COVID-19 list.

The best thing that happened to the Giants regarding Toney was they traded the No. 11 overall pick in the draft to Chicago and got the 20th pick and the Bears' first-round selection in 2022. The Bears selected quarterback Justin Fields.

Heading into the final game of the regular season, New York (4-12) is positioned to have the fifth and eighth draft picks.

“It’s a tough business, it’s a physical business and it’s collision on every snap,” Tolbert said. “So, you have to do the best you can to be able to maintain your body whether it’s nutrition, whether it’s being with the trainers, whether it’s massages, whatever. Just do whatever you can to make sure your body is in the best possible condition to go out there and play.”

Receiver Kenny Golladay, who signed a $72 million contract, also struggled this season. He had 34 catches for a team-high 499 yards and no TDs.

When Golladay was a rookie with Detroit in 2017, he missed five games with a hamstring injury.

“He’s been dealing with a lot,” Golladay said of Toney. “I was a third-rounder, he was a first-rounder, so he already had high expectations. I would just say stay the course.”

NOTES: In addition to Toney, the Giants ruled out WR John Ross (knee) and QB Mike Glennon (wrist). OL Will Hernandez (ankle), WR Collin Johnson (hamstring) and FB Cullen Gillaspia (knee) are questionable. ... Friday was the team's final full practice of the regular season. It was held on the team's practice field after crews cleared away about five inches of snow that fell overnight. “Of course, guys had a little fun with the snow afterwards — diving in there, throwing snowballs around — but it was a typical Friday as far as practice,” said cornerback James Bradberry, the only player on the roster not to miss a practice this season.