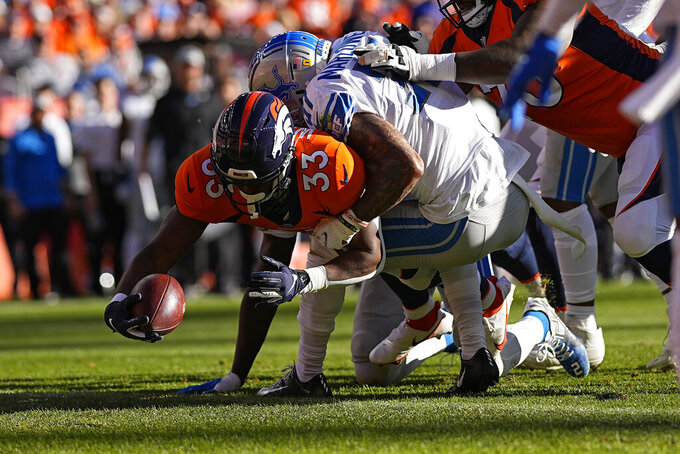 Denver Broncos running back Javonte Williams (33) dives into the end zone for a touchdown against the Detroit Lions during the first half of an NFL football game, Sunday, Dec. 12, 2021, in Denver. (AP Photo/Jack Dempsey)

DENVER (AP) — To stir things up, Denver Broncos quarterback Teddy Bridgewater went with a new flavor of milkshake the night before the game.

Turns out, there was something even sweeter: The tailback tandem of Melvin Gordon & rookie Javonte Williams.

Gordon and Williams each scored two touchdowns as the Broncos remained in the thick of the playoff chase with a 38-10 win over the Detroit Lions on Sunday.

It's the third time in Broncos history a pair of running backs scored multiple TDs from scrimmage in the same game. The other two times were in the early 1960s.

“When our number's called, it’s a premium to make plays,” Gordon said. “So we’re not thinking twice about what we need to do.”

The final rushing line looked like this: 39 carries for 184 yards — all by Gordon and Williams. Gordon finished with 111 yards on 24 attempts and two scores. Not to be outdone, Williams had 73 yards on 15 carries and a touchdown where he dragged two defenders into the end zone with him. He also had one reception for a 10-yard score.

“Anytime you hand it off 39 times and the other team knows that you’re handing it off that many times and you’re able to grind out the yards, credit to the guys doing the blocking,” said Broncos coach Vic Fangio, making sure to throw credit toward the offensive line. “But our two backs are really, really good. I love them both. Glad we have them both. Nobody’s going to carry it 39 times by themselves.”

The Lions (1-11-1) entered with a defense that ranked 28th in the NFL against the run. The Broncos quickly exploited it.

“It was pretty disappointing that we weren’t as sound in our gap accountability as we should have been,” said Detroit defensive tackle Alim McNeill, whose team was hit hard by COVID-19 last week, with several players on the virus list Sunday. “The little things will get you beat … That hurts you.”

In Williams' view, the spark was delivered before the first snap as the offense took the field with just 10 players, leaving a receiver spot open. It was a way to honor the late Demaryius Thomas, who died Thursday night in his suburban Atlanta home at the age of 33.

Denver took a delay penalty — Detroit declined it — as the crowd cheered.

That moment bonded the Broncos (7-6), who remain in the playoff chase with Cincinnati (7-6) coming to town next weekend.

“We had something bigger to play for today — DT,” Williams said.

Gordon showed no signs of a hip injury that sidelined him last week in a loss at Kansas City. He did suffer a hand/thumb injury early in the Detroit game, which is why he told Williams to be ready on passing downs because Gordon wasn't sure how well he could catch.

“We kind of got that relationship where you look out for one another,” Gordon said.

They rotated often, too, just to stay fresh.

“The coaches are trying to be smart and knowing that every game from here on out are going to be playoff games,” said Williams, the hard-to-bring-down rookie out of North Carolina. “We need both of us and everybody to be healthy.”

Earlier this week, Gordon joked that although he wanted to be back next season, fans don’t particularly like him because of what he chalked up to fantasy football. They may prefer to see more of Williams.

The Broncos tweeted during the game: “Hope you started Melvin Gordon in fantasy today.”

One player who certainly appreciated the run dominance was Bridgewater, who was an efficient 18 of 25 for 179 yards through the air and two scores.

The Broncos started fast with two rushing TDs in the first quarter.

For that, give proper credit to the power of milkshakes. Bridgewater and the quarterbacks have been getting shakes at Chick-fil-A the night before a game. Bridgewater went with cookies and cream.

“The times we've gotten milkshakes, we've had some success in the red zone, third down, so maybe that’s what it is,” cracked Bridgewater, whose team was 5 for 5 in red-zone efficiency and 8 of 12 on third downs. “We're just trying to find a way to win.”