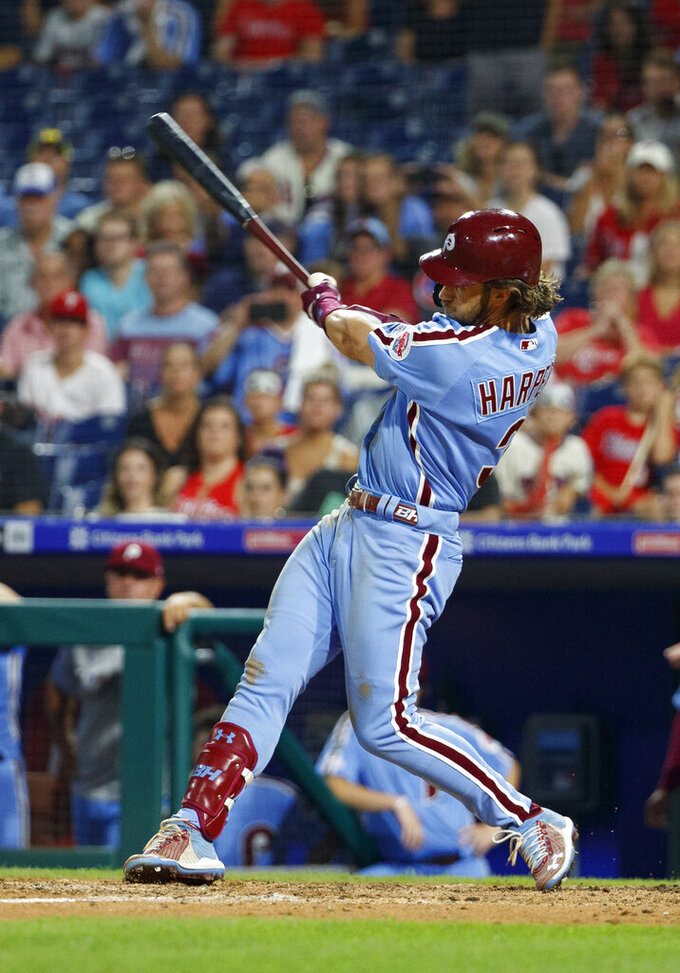 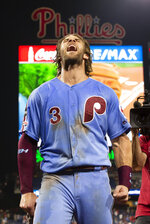 PHILADELPHIA (AP) — Bryce Harper blasted a grand slam with one out in the ninth inning, capping a six-run rally that sent the Philadelphia Phillies over the Chicago Cubs 7-5 Thursday night for a three-game sweep.

Harper delivered his biggest hit yet in his first season with the Phillies, celebrating while running around the bases and then getting mobbed by teammates at the plate.

But the Phillies rallied against Chicago's bullpen and moved within one game of the Cubs for the second wild-card spot in the NL.

Carlos Santana also launched two home runs as the Yankees matched a franchise record by serving up seven. Greg Allen and Santana went back-to-back in a five-run eighth against rookie designated hitter Mike Ford, a former Ivy League pitcher and player of the year at Princeton.

Every starter for Cleveland finished with at least two of the team's 24 hits.

Adam Plutko (5-3) was handed a 7-0 cushion before throwing a pitch and went six innings to beat the Yankees for the second time this season.

New York won despite giving up six homers, including three in the ninth. Freddie Freeman and Josh Donaldson each hit his second homer of the game in the inning and Ronald Acuña Jr. hit a two-run shot. Matt Joyce homered in the fourth.

Teheran (7-8) recorded only four outs while giving up eight hits and six runs.

Nick Senzel and Eugenio Suárez each drove in a run for Cincinnati, which stopped a four-game slide.

St. Louis had won five in a row to move into a virtual tie with Chicago for the NL Central lead. The Cubs had a chance to move in front again, but they lost 7-5 at Philadelphia on Bryce Harper's game-ending grand slam.

Gray (8-6) walked three and hit a batter while throwing 97 pitches.

Michael Wacha (6-6) extended the St. Louis pitching staff's streak of consecutive scoreless innings to 22 before the Reds pushed across two runs in the fifth.

The Dodgers increased their homer total this week at pitcher-friendly Marlins Park to 14, a franchise record for a three-game series. Max Muncy hit his 29th, Corey Seager his 12th and Kyle Garlick his third.

Bellinger reached the 40 mark for the first time with a three-run shot in the seventh.

Brian Anderson, Starlin Castro, Jorge Alfaro and Lewis Brinson each had three RBIs for Miami, and Jon Berti scored three times. The last time Marlins had four players with three or more RBIs was in 2006.

Caleb Smith (8-6) needed 106 pitches to get through five innings but allowed only one hit and one run — on Garlick's homer in the fifth.

Mallex Smith stole two bases, giving him 34, the most in the majors. The Mariners won two of three after losing eight of their previous nine.

Detroit finished 4-7 on its 11-game homestand to fall to 17-43 at home. The Tigers need to win five of their last 21 games at Comerica Park to avoid becoming the first team to lose 60 times at home.

Tigers starter Spencer Turnbull (3-11) allowed three runs and six hits in five innings. Turnbull struck out seven batters in the first three innings, but only retired the side in order in the first. The Mariners put two runners on in the second and scored three runs in the third.

ARLINGTON, Texas (AP) — Luis Arraez hit the first of three more homers by Minnesota in a win over Texas.

Miguel Sanó and Eddie Rosario also went deep for Minnesota (73-48), which maintained a half-game lead over Cleveland for the AL Central lead. Marwin Gonzalez had a pair of RBI singles among his four hits.

Michael Pineda (8-5) struck out six with one walk while allowing three runs and six hits over five innings. He threw 55 of 86 pitches for strikes in his first start since Aug. 1. Drew Smeltzer threw the final four innings for his first save.

Willie Calhoun and Hunter Pence homered for the Rangers.

Trout put a solo shot off Reynaldo Lopez (7-10) into the fake rock pile beyond center field in the third inning, keeping pace with the Dodgers' Cody Bellinger for the overall major league homers lead and reaching another franchise milestone.

The two-time AL MVP became the fastest player to 40 homers in Angels history and the fifth-fastest in the majors in this century by reaching the mark in 123 games — 13 fewer than Troy Glaus needed for the Halos in 2000.

Justin Upton hit a three-run homer and drove in four runs, David Fletcher hit a tiebreaking two-run single and Hansel Robles earned his 17th save as the Angels earned their fourth win in six games.

Heaney (2-3) yielded three runs in his first victory since June, striking out six and walking none.

PHOENIX (AP) — Evan Longoria had a 412-foot homer among his three hits and four RBIs, Dereck Rodriguez pitched seven strong innings in his first day back in the majors and San Francisco beat Arizona.

Longoria had a two-run single off Alex Young (4-3) in the first inning and hit a two-run homer off Young to cap a three-run fifth as the Giants pulled even with Arizona in the chase for an NL wild-card spot.

Rodriguez (5-6) retired the first 11 batters he faced before Eduardo Escobar lined a single to right field with two outs in the fourth inning. He gave up three singles, struck out four and walked one.

Austin Slater had three hits, scored twice, drove in a run and reached base all five times for the Giants (61-61), who have won four of five. Buster Posey had two hits and an RBI.

The 10 homers topped the previous record of eight combined for the run-down venue also home to the NFL's Oakland Raiders. The A's and Astros were the last to total eight together, on Aug. 19, 2018.

Alex Bregman added a homer for Houston and Chris Devenski (2-2) took the loss.

Jake Diekman (1-6) recorded the last out of the eighth for his first victory with Oakland, which also got a homer from Corban Joseph.