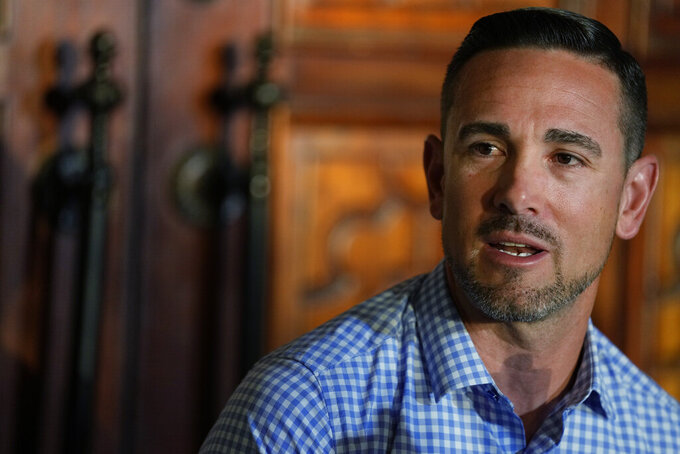 The previous day, to ensure more opportunities for diverse candidates, the league added requirements on the hiring of offensive assistant coaches, and women in general. That included adjustments to the Rooney Rule adopted in 2003 and amended frequently in attempts to enhance opportunities for people of color and women for nearly all league and team jobs.

Beginning this season, all 32 clubs must employ a female or a member of an ethnic or racial minority to serve as an offensive assistant coach. The person will receive a one-year contract and work closely with the head coach and offensive staff to gain experience.

“Inclusion is very important,” said Washington's Ron Rivera, the only Hispanic head coach and one of five minorities in that position in the NFL. "We've opened up a process for candidates and ensured ourselves of finding better candidates.

“Creating a minority position committed to working directly with the head coach and the offensive coordinator and the quarterbacks, taking part in game planning, is a hell of an idea. One thing that has been shown is the next head coaches in this league have been funneled through the quarterback coach position. This will create positive opportunities, I believe.”

Rivera, a leader among NFL coaches in diversity and inclusion, makes a strong point. Such current head coaches as Sean McVay of the Super Bowl champion Rams, Zac Taylor of the Bengals, the team that lost to the Rams for the title, Green Bay's Matt LaFleur, Atlanta's Arthur Smith, and recent hires Mike McDaniel in Miami, Josh McDaniels in Las Vegas and Kevin O'Connell in Minnesota took similar paths — from the offensive side of the ball.

“We recognize we have seen progress on some fronts,” said Steelers owner Art Rooney II, chairman of the league’s Diversity, Equity & Inclusion Committee, “but we still have a way to go on other fronts.”

Falcons owner Arthur Blank, who was on the original committee that devised the Rooney Rule, expressed faith in the NFL's direction in minority hiring.

“I feel very confident in the changes that have been made and the accountability that has been created,” he said.

The Falcons hired a Black general manager, Terry Fontenot, and a white head coach, Smith, in 2021.

“As a club I think we’re doing really well, but this is one in which we have to have all 32 clubs doing well,” Blank said. "I think there will be more accountability with each other, which is always the best form of accountability.”

On another front, the owners approved a resolution mandating all clubs to use approved sensors to collect individual player data during every training camp practice or activity. The data must be provided to what the NFL calls “expert consultants” to advance research into injury reduction efforts. Every team must share two full training camp practice videos with those consultants, as well.

“The benefit of the collection of data from teams has been tremendous and the insights have been very helpful,” said Jennifer Langton, the league’s senior vice president of health and safety innovation. “If we can get information in aggregate, it empowers our research and studies. This (resolution) will guarantee we have the data.”

Such info can aid in the development and manufacturing of helmets, particularly position-specific headgear. There already are such helmets for linemen.

“From head to toe, how can manufacturers make better equipment for different positions?” Langton said. “This data is so beneficial to the impact we've already had on health and safety.”

Dr. Allen Sills, the NFL's chief medical officer, stressed that helmet guardian caps worn by some players have proven to be substantially beneficial.

Of particular concern from last season was a rise in punt team injuries, making it the most dangerous play statistically. No action was taken in regard to rules changes as the NFL continues a deep dive into the causes.

“It's a complex process,” said Jeff Miller, who oversees health and safety for the league. “With punts, there are lots of areas we see people getting injured.”

ANYBODY GOT A RECEIVER?

After trading All-Pro Davante Adams to Las Vegas, Green Bay coach Matt LaFleur could be excused if he put out a missing persons request for wide receivers.

Most notably, the Packers need a deep threat; they have only six receivers currently on their roster.

“If you look at our roster right now, we definitely need to get some speed in that room,” LaFleur said. “We need a legit guy that can take off the top of the coverage. We lost a guy that was pretty good at doing that. It’s like putting a puzzle together. You’ve got to find those pieces that you’re missing and put it all together.”

So the onus is not only on the front office to bring in some pass catchers — April's draft is stocked with them — but also on LaFleur and receivers coach Jason Vrable, who also is the passing game coordinator. Aaron Rodgers is back, of course, but giving him help on the outside is essential.

“We’re going to have to integrate these guys pretty quickly,” LaFleur said. “It’s going to be a lot of work for a guy like Jason Vrable and, really, everybody on our offense to get anybody up to speed. Especially when you’re talking about playing with a guy like Aaron Rodgers, who, you better be on high alert at all times, he might give you the most subtle signal and you’ve got to see that.”